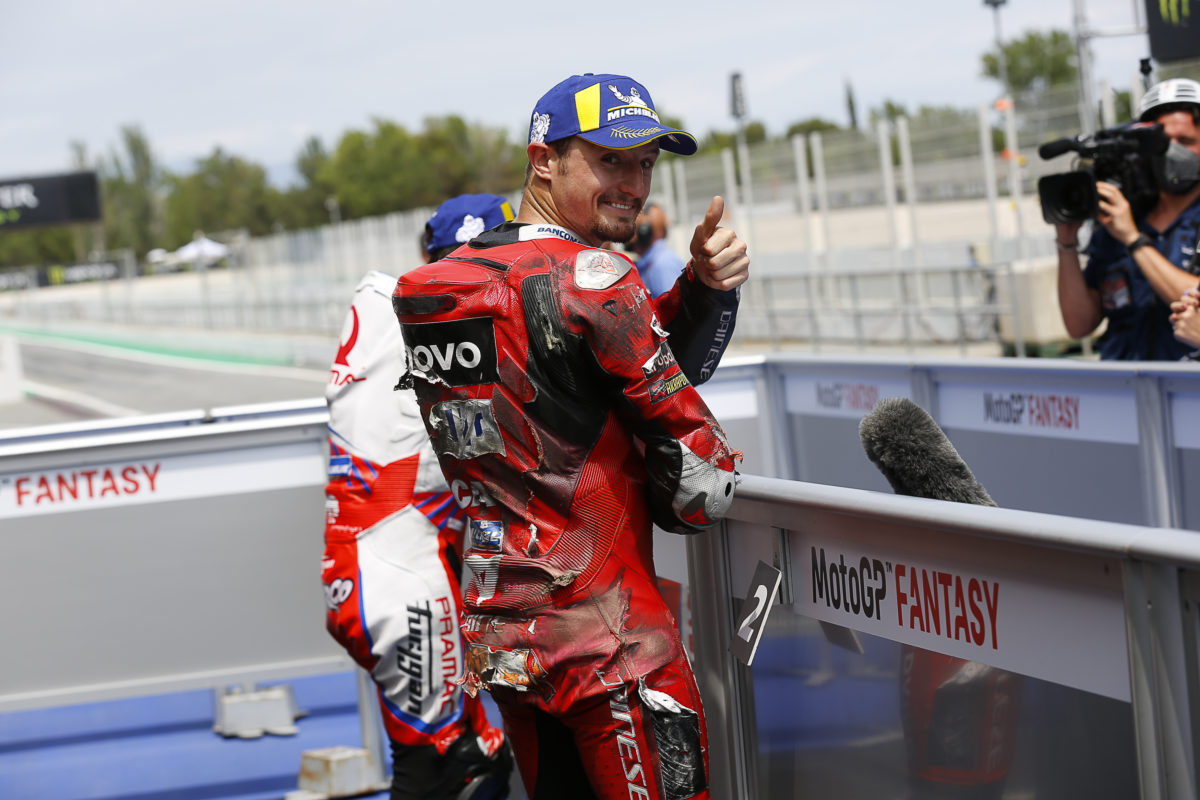 Jack Miller in his scuffed leathers after qualifying

Jack Miller says he was “giving it some” when he crashed just after setting a time good enough for second on the grid at the Catalan MotoGP.

Miller had a topsy-turvy Saturday at the Circuit de Barcelona-Catalunya, ending up on the front row despite having to go through Qualifying 1.

The Queenslander missed the cut by 0.069s at the end of Free Practice 3 but topped the first stanza of qualifying and then came up 0.037s shy of Fabio Quartararo’s pole time.

It was three corners after Miller’s 1:38.890s that he highsided off his Ducati but the consequences were minimal, with no one subsequently going faster, and no major damage to body.

“To be honest, I’ve come out of it rather well for a Turn 3 highside,” he remarked.

“I did my fastest lap– only had one [rear] tyre for the Q2 – and the next one, usually the tyre is a little better on the second lap and yeah, it just let go really quickly.

“I was giving it some, but it just let go really quickly. Unfortunately, TC [traction control] wasn’t able to save me on that one and sent me over the front, but I came out of it pretty good to be honest.

“I landed on my back and sort of slid off, so it wasn’t too bad. We’re back here on the front row.

“Definitely found a heap of pace in FP4, we made a good step with the bike, so I feel relatively excited for tomorrow’s race especially now starting from the front row.

“I think it’s going to be crucial for tomorrow’s race and hopefully we’ll be able to take it to Fabio.”

Lack of grip has been a common observation about the Barcelona track surface so far this weekend.

Miller said that had improved on the second day of the event, but put his gains largely down to set-up work from the Ducati Lenovo Team.

“For sure the grip level I think has improved a little, but also our set-up has improved quite a considerable amount,” explained the 26-year-old.

“But it felt good out there. I was able to keep in the 40s; okay, not 39s like Fabio but normally in the race I’m able to find that little bit extra.

“If you can go and do a 17-lap run in FP4 when you don’t really have to, it means you’re working well and I’m having fun at least, so that’s a good thing.”

Miller is not the only Australian starting on the front row in Catalunya this weekend, with future Tech3 KTM MotoGP rider Remy Gardner claiming pole for the Moto2 race.

“I just got a bit carried away on the ol’ throttle!” – @jackmilleraus 😂

After qualifying second, the Australian saw his Q2 ended early by this huge highside! 😲#CatalanGP 🏁 pic.twitter.com/EKyabVsvMg