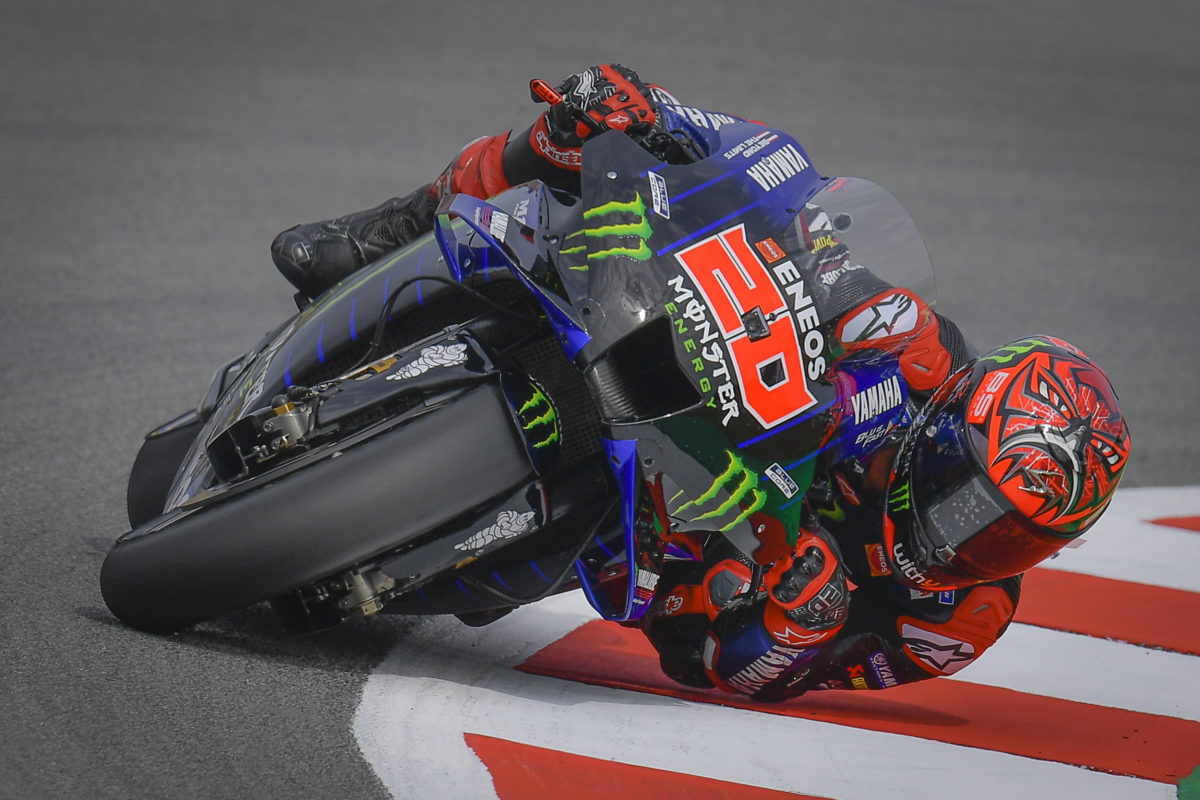 Fabio Quartararo has taken pole position for the Catalan MotoGP as Jack Miller salvaged second on the grid despite a crash and a Qualifying 1 start.

The pole is Quartararo’s fifth in a row, the Monster Energy Yamaha rider ending up 0.037s faster than the Ducati Lenovo Team’s Miller at the Circuit de Barcelona-Catalunya.

Pramac Racing’s Johann Zarco made for two Ducatis on the front row, 0.196s off the pace with the lap he completed after the chequered flag at the end of Qualifying 2.

Quartararo always looked likely to put #20 into first on the grid, bowling out a 1:39.351s on his first flyer which was almost half a second up on the field.

Aleix Espargaro (Gresini Aprilia) was initially next-best before Franco Morbidelli (Petronas SRT Yamaha) took over the ascendancy with a 1:39.274s on his second flyer.

Quartararo, however, was on his was to a 1:38.853s to head Morbidelli at the end of the first runs, at which time Maverick Viñales (Monster Energy Yamaha) sat third on a 1:39.512s.

The other Yamaha rider in the field, Valentino Rossi, was on his way back to the pits on a scooter after crashing at Turn 4 in what is now a rare Q2 appearance for the seven-time premier class champion.

Miller was 11th, last of those to have gone out at the time, after missing direct passage to Q2 by 0.069s and then starting on a used rear tyre once he got there.

Miller then fired in a 1:38.890s and the Queenslander was on pole position pace on his following lap when he highsided at Turn 3.

Quartararo had not gone any faster than on his first run when he rolled out of a push lap just before the chequered flag came.

The Frenchman had, however, already done enough to secure pole and become the first man since Marc Marquez, in 2014, to bag five straight.

Oliveira still managed to slot into fourth with a 1:39.099s on his final lap, pushing Morbidelli to fifth and Viñales to sixth.

Aleix Espargaro ended up seventh, ahead of Binder, Francesco Bagnaia (Pramac Ducati), Mir, and Rossi, who finished the session on his second bike.

Pol Espargaro, who came through Q1, crashed just after Miller had done in Q2 and was ultimately 12th.

Earlier in Q1, Marc Marquez decided it was Miller who he would follow around the track, as he had done with Viñales a week earlier at Mugello.

Unlike Viñales, the Ducati man was unperturbed, and even enticed Marquez into an early error before committing one himself on his second flyer.

Miller regrouped to be top after the first runs on a 1:39.553s, a time which Takaaki Nakagami (Idemitsu LCR Honda) knocked off with a 1:39.347s in the final minute of the session.

With the chequered flag out, Marquez was once again tailing #43, but Pol Espargaro one-upped his team-mate by using the same tactics.

Marquez was therefore consigned to third for the session and 13th on the grid, ahead of Nakagami and Jorge Martin (Pramac Ducati).

Iker Lecuona (Tech3 KTM) had been second-fastest in Q2 when he went down at Turn 9 on his second run, and is set to start from 16th.

Race start is at the slightly earlier time of 21:00 AEST on Sunday.