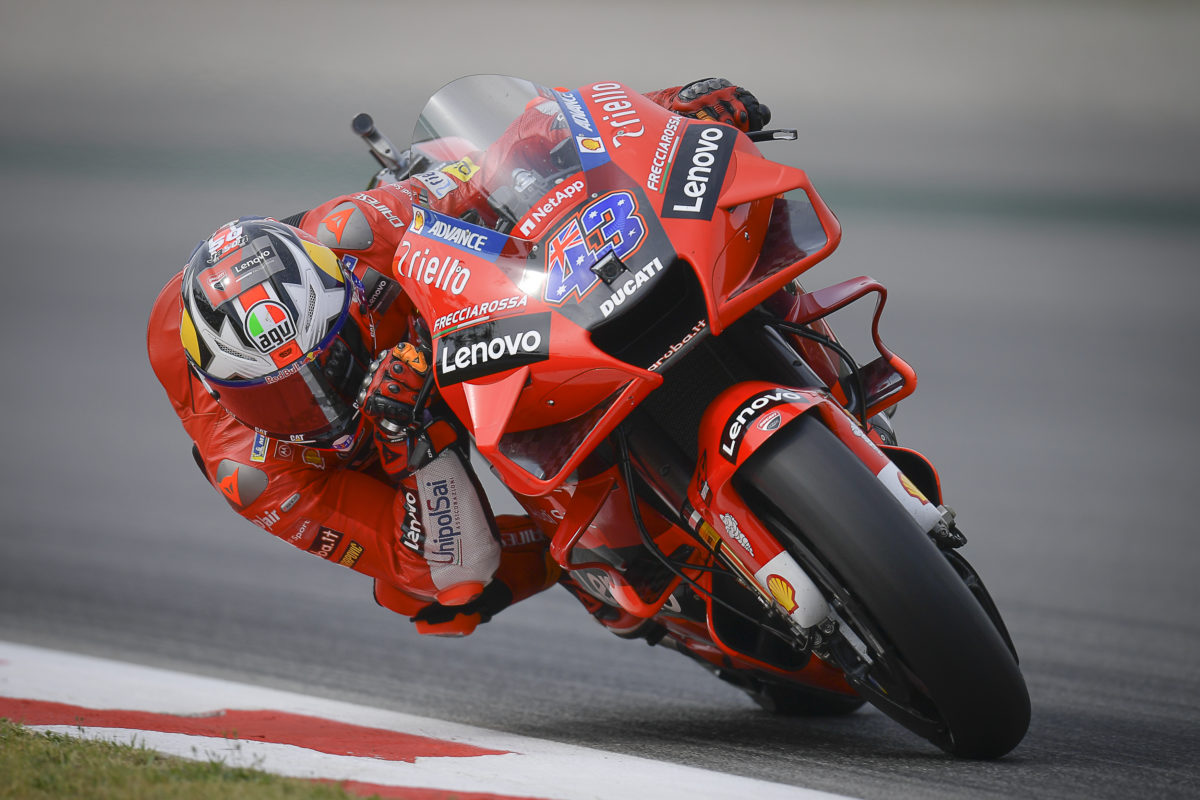 Jack Miller ended the opening day of practice at MotoGP’s Catalunya round with a top 10 time despite it coming on “probably the most messy lap of my career”.

The factory Ducati rider ended up seventh-fastest in Free Practice 2 and on the combined Friday practice timesheets, 0.679s behind the benchmark set by Pramac’s Johann Zarco on another Desmosedici.

Miller found the conditions at the Circuit de Barcelona-Catalunya to be quite challenging and revealed that his personal best 1:39.914s, at the end of the latter session of the day, was a somewhat ragged lap.

“The Ducati is working rather well here,” he said.

“The track is quite difficult – let’s say, tricky conditions – the grip level is quite low, but in a really weird way, because you lose the rear in some strange moments, especially on entry.

“I had one lap at the end and I was able to put it together but I think it was probably the most messy lap of my career.

“The bike was moving a lot, I had a moment at Turn 4 already on the entry, Turn 9, and then Turn 10; I lost the rear just on the entry and when this happens, you overload the front a little bit. Thankfully, the front stayed.”

For the most part, however, the man with two wins to his name thus far in 2021 was working on race pace.

“The rest of the day was simply focusing on race pace, trying to understand the soft and the medium tyre for race distance,” he added.

“I’m quite curious to try the hard for tomorrow [Saturday]; it just seems the carcass, the actual casing of the tyre, is moving quite a lot.

“It’ll be interesting to see how the hard goes because the carcass should be a little bit stiffer, and from what we see from the Yamahas that tried it today, it seemed to be working rather well.

“So, we have many more laps to do tomorrow, but I’m happy; we did a lot of laps today and a lot of them were fast.”

While Miller was able to achieve consistently good pace on the soft compound, his experience of the medium suggests that the hard tyre may be worth using in Sunday’s grand prix.

“My first soft, it took a long time to start working, probably four or five laps ‘til I really felt like normal,” he explained.

“Then when I had it, I was able to keep the pace in the 40s, which is good; I’m really happy with that. If I can continue that all weekend, or let’s say, for 24 laps on Sunday, I think I’ll be pretty happy.

“But I tried the medium, back to back, just to understand how it was working, and definitely the harder casing on the medium helped me to be even faster but also even more smooth and consistent; let’s say, less output as a rider.

“I think the H [hard compound], I’m quite interested to try that for that reason only, because it just seems, when you drive off the corner, you get a lot less pumping and the bike seems little bit more stable.”

Zarco likewise set his fastest lap of the day, a 1:39.235s, on his last lap, with Franco Morbidelli second-quickest on a 1:39.256s on his ‘A-spec’ Petronas SRT Yamaha, and factory Monster Energy Yamaha rider Fabio Quartararo third on a 1:39.401s.

Brad Binder put his Red Bull KTM entry fourth on the timesheet on a 1:39.662s while Miller’s Ducati Lenovo team-mate Francesco Bagnaia rounding out the top five courtesy of a 1:39.760s.

Practice continues this evening before qualifying begins at 22:10 AEST.