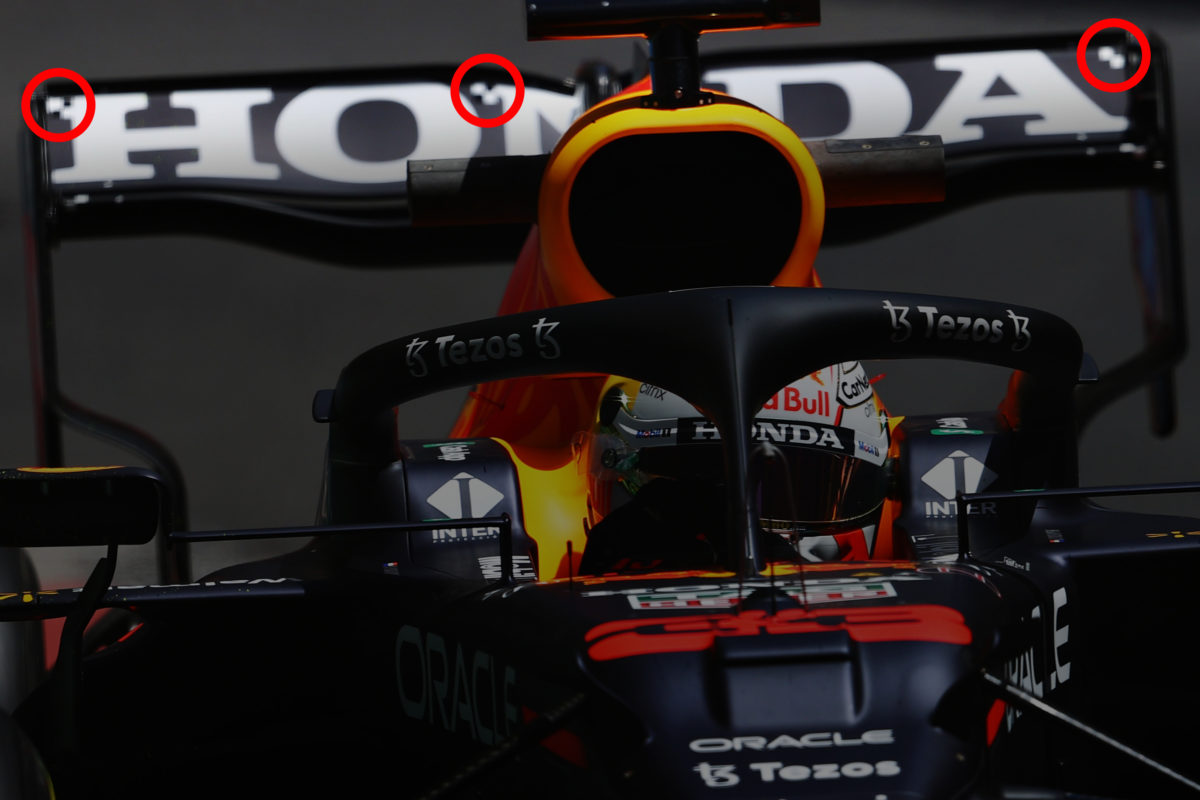 Teams at this weekend’s Formula 1 Azerbaijan will carry markings on their rear wings to help the FIA monitor deflection.

It comes as part of an updated Technical Directive from the governing body as debate over flexible aerodynamic parts continues.

Mercedes and Red Bull have been at loggerheads since the Spanish Grand Prix when it came to light that the latter had a rear wing that lays back at high speed.

It goes on to state that “any specific part of the car influencing aerodynamic performance must remain immobile in relation to the sprung part of the car.”

The regulations then outline the tests and allowances for what is considered legal movement in Article 3.9.

It is that point which Red Bull has argued it has met, and therefore its car complies with the regulations.

The Technical Directive issued to teams specifically addresses Article 3.9, with the loads outlined (1000N) set to be increased from the week prior to the French Grand Prix.

However, there is a grace period of one month during which teams will be given a degree of freedom before the rules are strictly enforced.

That point has angered Mercedes and McLaren, which claim the design used by Red Bull (among others) is illegal and should be immediately outlawed.

Looking to calm the waters this weekend, where Mercedes boss Toto Wolff suggested his team could protest Red Bull should its flexible rear wing be fitted, the FIA has further clarified the Technical Directive.

“It was good to see that there was an update on the Technical Directive to the teams last week,” explained Mclaren team principal Andreas Seidl.

“These stickers now got introduced already for this weekend, which gives FIA a better opportunity or possibility to measure what’s actually going on.

“If you look at the TD it’s also clear that, Nicholas made it clear, that if he sees excessive deflections that he doesn’t base route to say that it is not within Article 3.8.

“But what happens if that’s the case? We need to see.”

Television footage and analysis during the opening day of running in Azerbaijan suggested that Red Bull’s wing does not deflect in the same manner as it did in Spain.

Indeed, it appears now on par with that used by Mercedes, whose wing appears to flex more than it did previously.

Red Bull topped both practice sessions on Friday, while Mercedes was unable to break into the top 10 in Free Practice 2.

Track action in Azerbaijan continues with Free Practice 3 starting at 19:00 AEST this evening with qualifying to follow at 22:00.