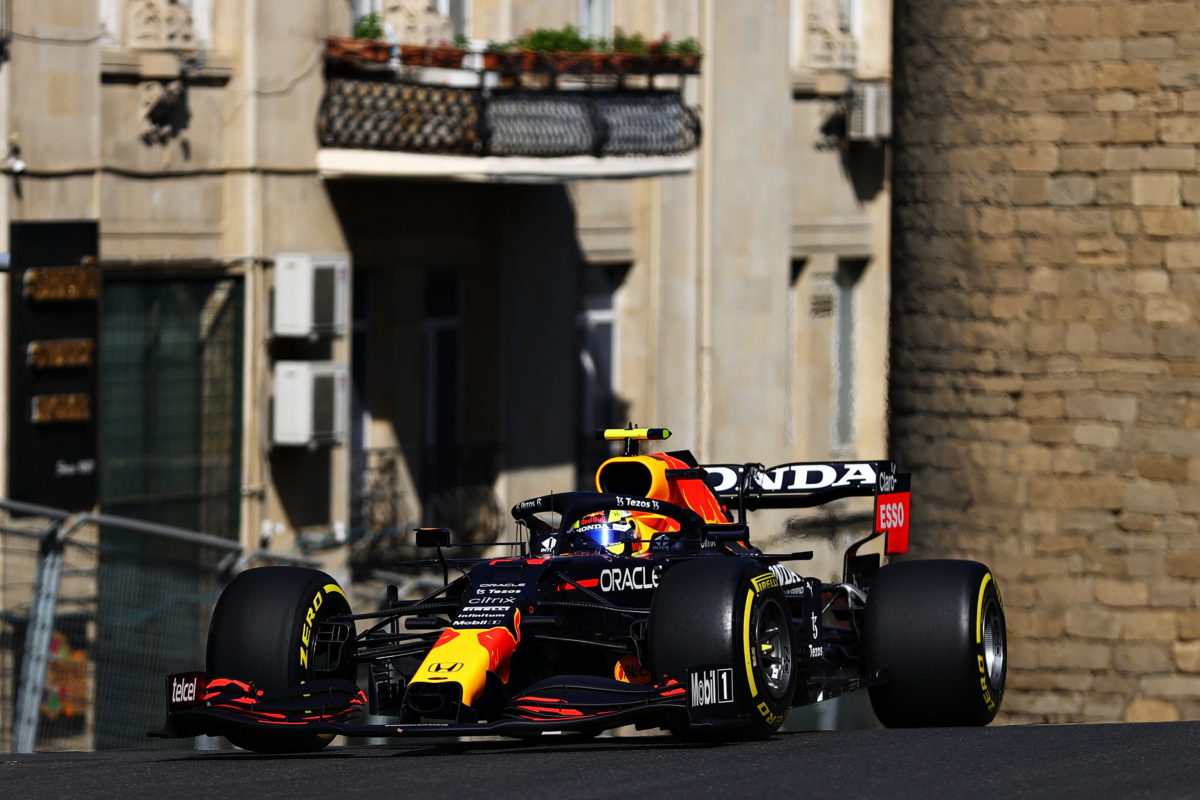 Sergio Perez has ended the opening day of running at the Formula 1 Azerbaijan Grand Prix fastest ahead of team-mate Max Verstappen.

The Red Bull duo headed the two Ferraris of Carlos Sainz and Charles Leclerc, while Lewis Hamilton languished outside the top 10.

It was a session that once again saw split priorities, with the first half focused on short runs before attentions switched to race pace in the final 30 minutes.

The early phase of the session was dominated by drivers running off the road; Valtteri Bottas, Sebastian Vettel, and Lando Norris all taking a trip up one of the various escape roads.

Also among them was Nicholas Latifi, though his issues appeared mechanical rather than driver error.

The Canadian took to the escape road at Turn 14, backing out before his Williams rolled to a halt just a few metres up the road to draw the red flag.

The session restarted with 41 minutes remaining, the clock having continued to count down throughout the stoppage.

Having just gone fastest of anyone to the first split, Leclerc nosed into the barrier at Turn 15.

The impact tore the front wing from the SF21 after he locked the front-right wheel and slid haplessly into the Tecpro barrier.

Despite having a new nose fitted quickly upon his return to the garage, Ferrari opted to push him back into the shed before he rejoined the session.

A disillusioned sounding Lewis Hamilton found himself struggling for pace halfway through the session, a 1:43.156s his best at a time Perez had improved to a 1:42.115s to go fastest.

His session did not improve and the seven-time champion ended the day a second off the pace, but still ahead of team-mate Bottas who was only 16th best and two seconds adrift.

Times slowed in the second half of the session as teams turn their attentions to race pace.

Perez therefore remained fastest from his Red Bull team-mate Verstappen, with the Ferrari pairing of Sainz and Leclerc third and fourth best.

It was an incident packed session, bookended by drivers struggling to keep their cars on the island in hot conditions.

The latter part of the session bore witness to a raft of drivers overstepping the mark and taking to the escape roads, primarily a result of long runs on the softest three compounds in Pirelli’s tyre range.

Lando Norris was eighth best for McLaren, while Ricciardo slipped to 13th following his strong showing in opening practice.

Fernando Alonso and Antonio Giovinazzi both found themselves inside the Top 10, as did Esteban Ocon in a promising performance for Alpine.

A final 60-minute practice session remains prior to qualifying, beginning at 19:00 AEST on Saturday.