Doohan eager to see how Remy Gardner fares in MotoGP

Doohan eager to see how Remy Gardner fares in MotoGP 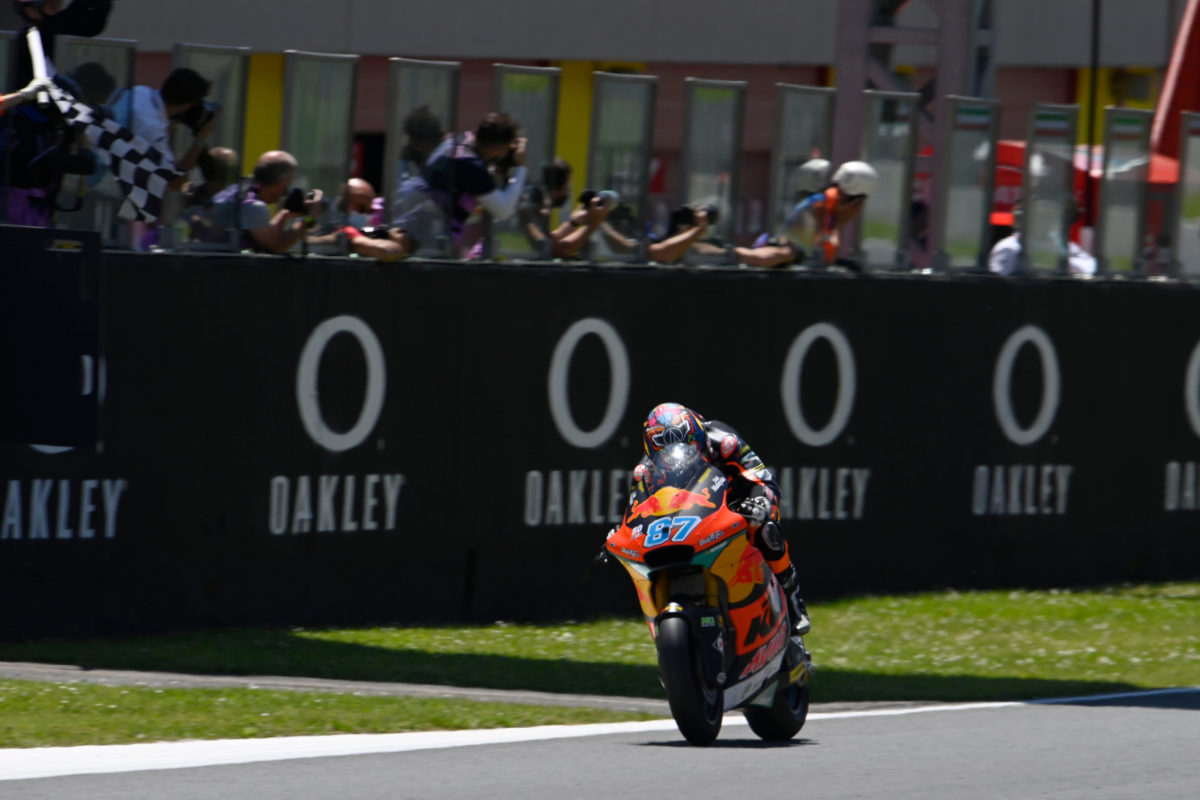 Mick Doohan is eager to see how Remy Gardner fares when he steps up to MotoGP next year.

KTM has now confirmed that Gardner will move from Moto2 into the premier class in 2022, placing him at Tech3.

The announcement came days after the second-generation rider scored his first win since joining the Austrian marque’s ranks, courtesy of a last-lap pass on Red Bull KTM Ajo team-mate Raul Fernandez at Mugello.

The victory represented Gardner’s fifth podium in six starts this year, the exception being a fourth at Jerez, and sixth in his last seven once his maiden grand prix win, at Portimao last year, is accounted for.

“Fantastic news with Remy moving up to MotoGP, it was inevitable,” Doohan told MotoGP’s official website.

“He’s the man of the moment really, he’s doing everything he needs to do – a fairly decisive pass last weekend at Mugello.

“I think he has major potential on a MotoGP bike and I can’t wait to see him on one.”

KTM took its first three MotoGP wins last year and appears to be righting the ship, thanks to a new frame and new fuel, after a slow start to 2021.

That, and KTM’s well-oiled conveyor belt of talent, was a point which has also not escaped Doohan.

“KTM also getting stronger and stronger, so it might be the right time to be joining them,” observed the five-time 500cc world champion.

“Herve Poncharal [team boss] and Tech3 have brought a lot of riders through so look, I’m excited; another Australian on the grid which is fantastic for us.

“I look forward to watching him progress rapidly because I think he’s a different rider these days: very comfortable, very cool and measured.

“So, I’m looking forward to seeing him perform at the highest level and I think he’ll do it quite well.”

Fellow premier class champion Wayne Gardner is the father of KTM’s newest recruit, and has therefore seen all of his formative years in the sport, including a Moto3 debut as a 16-year-old in 2014.

The 1987 500cc title winner claimed after Remy’s Portugal victory that the MotoGP paddock was finally becoming aware of his potential, but thinks the 23-year-old has more to come.

“He’s improved a lot over the last 12 months or more. He’s now with an amazing team with Aki [Ajo] and KTM and Red Bull, so I can understand why the results are so good.”

With Jack Miller having recently been renewed for another year at the Ducati Lenovo Team, Wayne Gardner thinks having two Australians on the grid will be big for MotoGP in the nation.

“Australia has a lot to rejoice for, and they’ll have two competitors to follow now,” he noted.

“I think it’s great for the sport generally and globally, and especially for Australia.

“It’s an honour and it’s my son out there too… As much as I’m scared to watch him, and nervous, I’m also very proud of him.

“Especially like last weekend winning at Mugello, it was a very smart race and calculated. I didn’t know if he could do it but he’s sometimes proved to me he can do miracles!

“He’s very clever at it. I think there’s a lot of talent there, there’s more to come out of Remy, and I’m very excited for him and proud of him, and I wish him all the best.

“I know he’s going to do a great job for himself, the team and Australia.”

Remy Gardner takes a six-point Moto2 championship lead to Catalunya this weekend for Round 7 of the season.