In his own words: McLaughlin recounts ‘mind-blowing’ 500 debut

In his own words: McLaughlin recounts ‘mind-blowing’ 500 debut

Scott McLaughlin opens up on his experience on Indianapolis 500 debut in his latest Hired Gun column for Speedcafe.com, presented by Grove Hire.

Well guys, I’ve sat staring at the laptop here in the bus – yep, still at Indy – and I’m not sure exactly what to tell you.

It was the greatest day yesterday – seriously, the most mind-blowing build up. The pomp and the ceremony. The anthem. The anticipation. And the Indianapolis crowd. Holy cow. I can’t wait to see the place when it’s full.

One of these days do try and get yourself here whenever it is we’re all allowed to travel next.

I did it as a fan five years ago and it blew my mind – and then to think I was back as a driver a few years later – racing for Roger Penske, I mean, really – pinch me.

There was a moment I’ll tell you about on the grid where I had to reach for the sunnies. I could just feel emotions coming when I realised my mum and dad and sister were back home – and they should have been beside me and Karly – and it hit me like a ton of bricks.

It was the greatest moment of my career – and for the two people who have done more for me than anyone, mum and dad should have been here – rather than a world away back in New Zealand.

So it was brilliant and awesome and so memorable for so many reasons – and to be honest with you, it also completely sucked.

And I’m sitting here completely and utterly pissed off – and it’s 24 hours later. And I’ll probably still be dirty for at least another few days – so I apologise to Karly for that in advance… 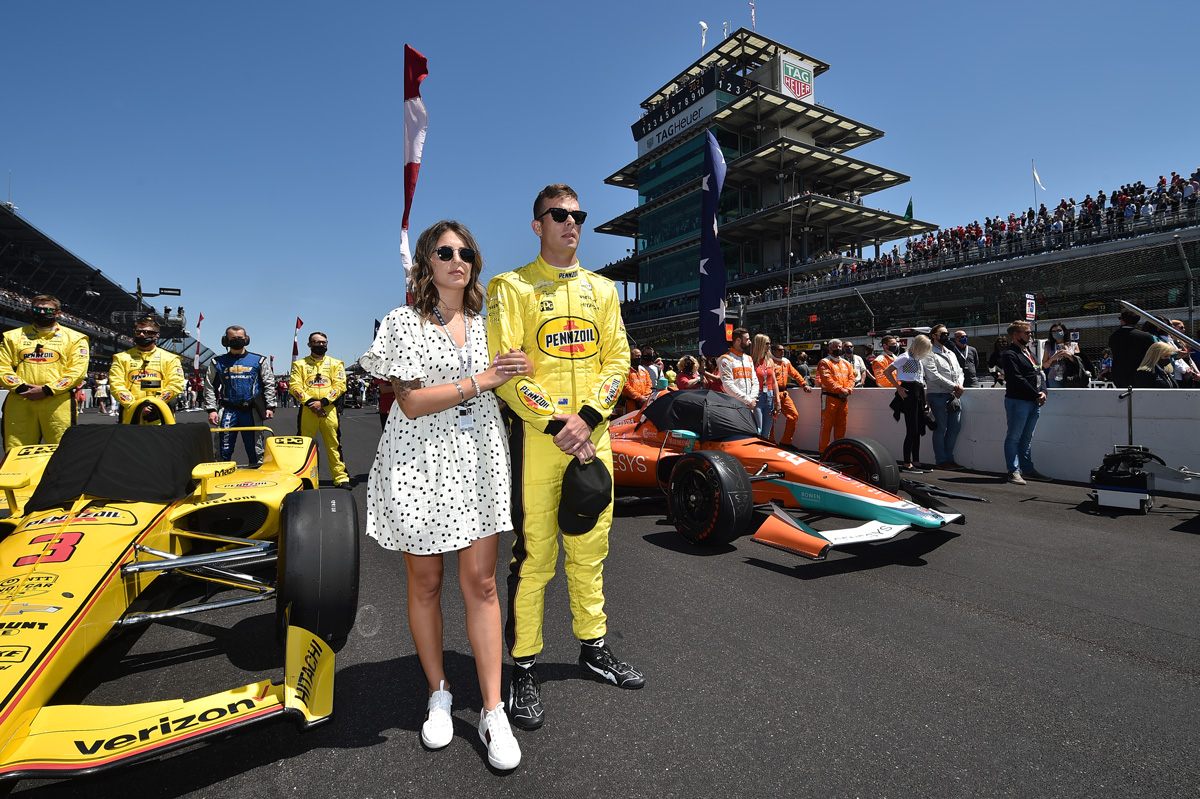 If you’re reading this, you know 20th is exactly not where I want to be finishing my debut Indy 500.

It was just one that got away from us – from me. It was my mistake. And I’ll kick myself for a while about it – but that’s who I am.

The race was going so well. Like, freakishly well.

I was comfortable. The car was great. The pace was awesome. We were making our way through the field. We were holding our own inside the top 10. We were saving the fuel we had to save.

We were ticking every box to make sure we were setting ourselves up for a run at the end.

And then I just couldn’t pull the Yellow Submarine up on pit entry and we rocketed through the pits at record speed.

I think I scared the hell out of a few of the IndyCar officials who would have seen my eyes WIDE open trying to catch the Chevy at speed!

It was just a simple mistake.

I didn’t pump my brake pedal up enough – and Indy bites you.

I felt until that moment I had not put a foot wrong through the entire month, and in one frantic moment an error put paid to a result.

So it cost us a drive-through penalty and from there we were chasing our tail just to get a result.

It was a rookie error and I’ll learn from it.

Plenty of others had similar tales of woe – Stefan, Will and Simona all had their own moments at the same spot. The Yellow Submarine in the pits

It doesn’t make me feel any better – but it does go to show how difficult it is to pull these cars up.

So we finished 20th – but still were able to secure the rookie honours – which was our goal.

It just goes to show at this place you have to be perfect.

And that’s why people keep coming back every year to try and nail it and win the thing.

And I already can’t wait to get back here – even though I haven’t left yet!

We shortly leave our bus where we’ve called home for the past month – which has been an awesome experience – and head for Wisconsin.

We have testing at Road America on Wednesday – which I think will be good for me to get back in the car and move on, and then we’re on the Detroit streets next weekend which will be a highlight.

It’s been a bucket list month for Karly and I and I’ve enjoyed it all and appreciate all of the messages from back home – it’s been completely overwhelming.

We’ll be better for it next May.