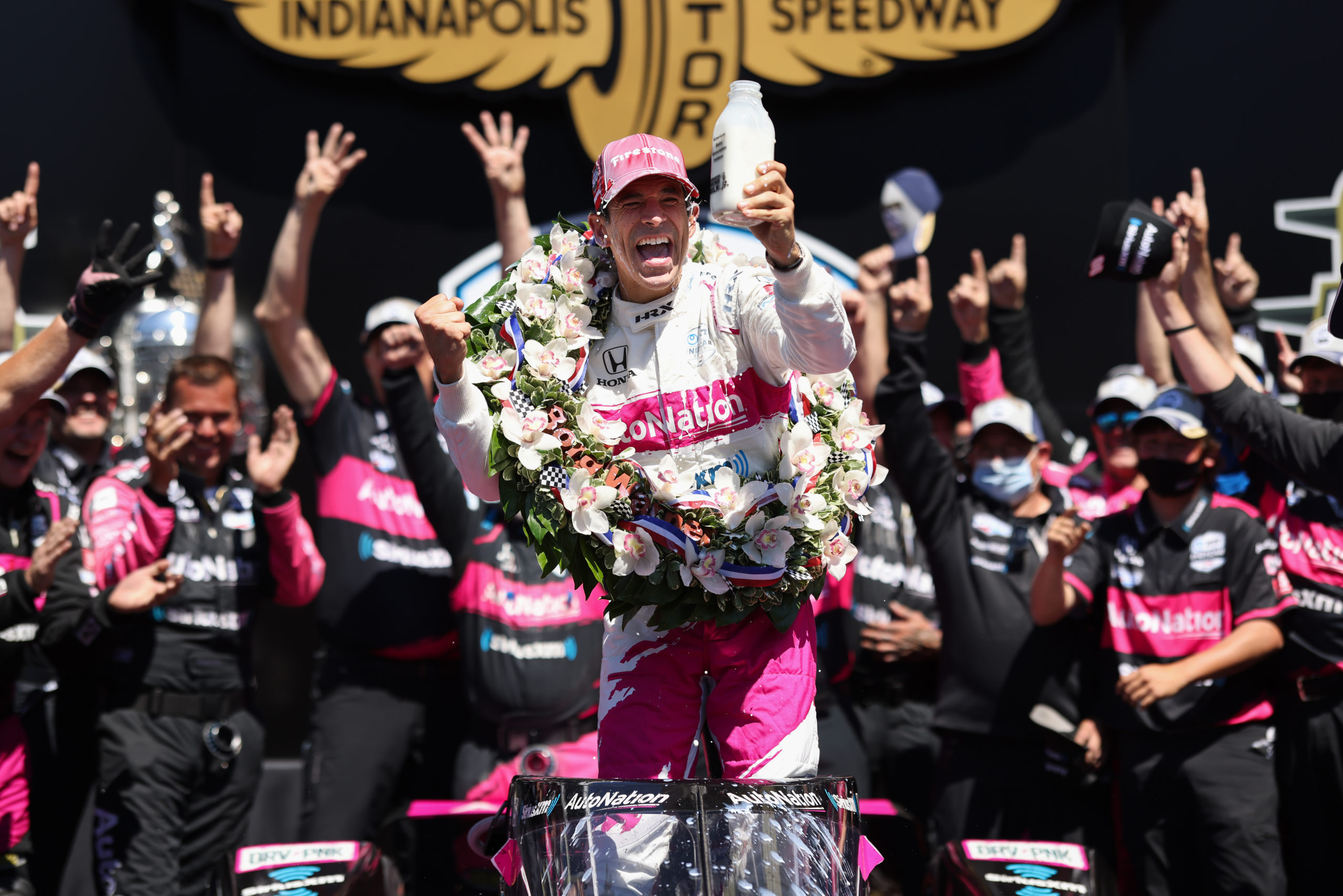 Helio Castroneves has become a four-time Indianapolis 500 winner in an incredible finish to the 105th running of the Greatest Spectacle in Racing.

In doing so, the Brazilian becomes the first non-American four-time winner of the famed 200-lapper at Indianapolis Motor Speedway.

It’s the first time Meyer Shank Racing has won the Indianapolis 500 in only their fifth attempt.

Palou and Castroneves would trade places lap after lap in the dying stages of the race, the latter taking the lead with two laps to go.

As the leaders came upon lapped traffic with one lap to go, Palou couldn’t find a way through, Castroneves crossing the line to win by a mere 0.4928s.

“This is absolutely incredible,” said Castroneves.

“From the beginning, we were so comfortable, happy. I tell you what, I’m just excited. The Firestone tyres were absolutely on rails.

“The car was, literally, it was incredible. I knew it was good. I knew I was going to fight. I put the elbows out.

“I tell you what man, what an incredible feeling. I couldn’t do this without my family. My mum and dad in Brazil, my sister, I love you guys. We did it.” 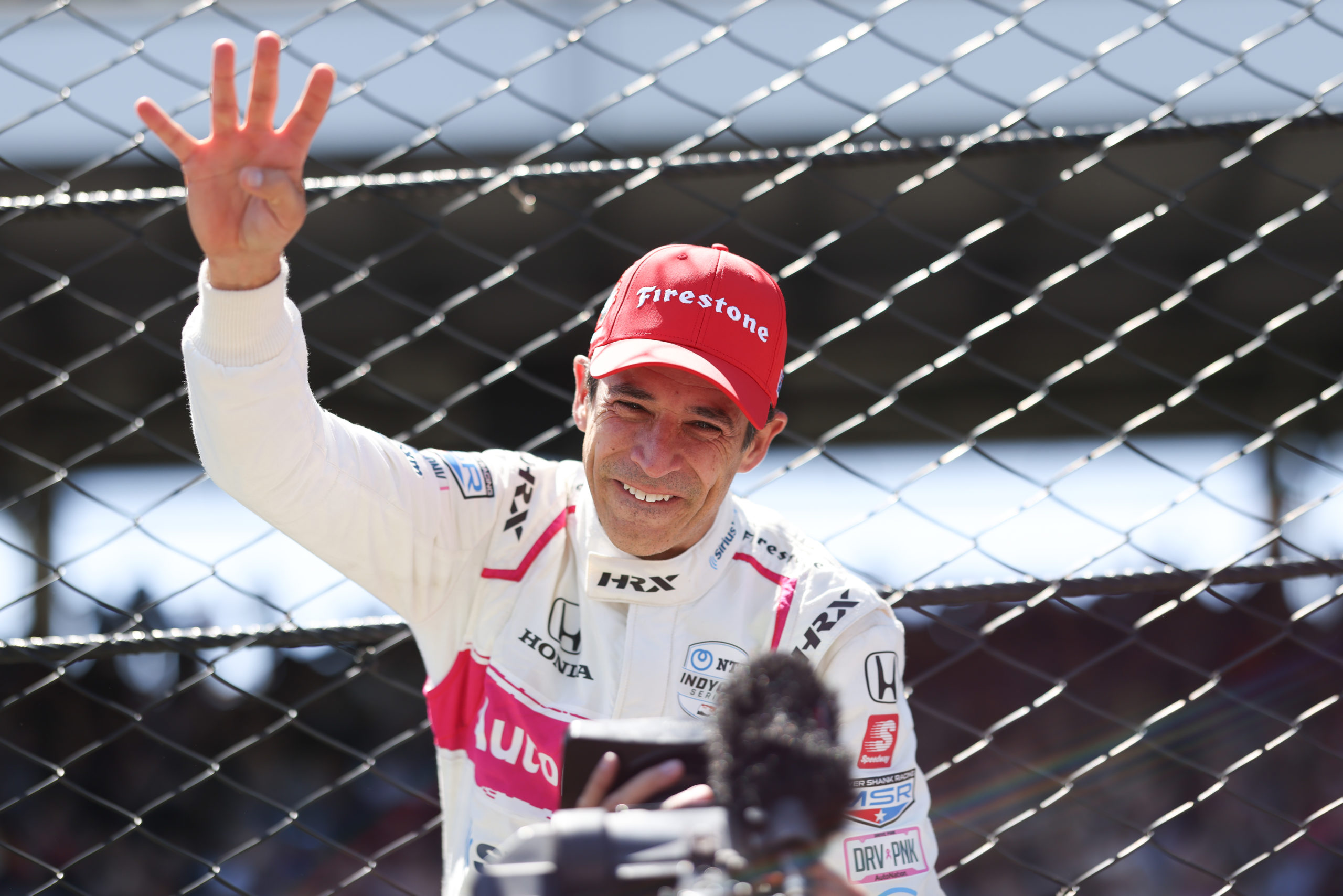 Read the full report below:

Initially, it was Scott Dixon (#( Chip Ganassi Racing) who got the holeshot from pole position to lead the field into Turn 1. However, his time at the front was short-lived as second place starter Colton Herta (#26 Andretti Autosport) swept through to take the top spot at Turn 3.

VeeKay wasted no time getting to the front, driving by Dixon on Lap 2 and surging into the lead with a pass on Herta on approach to Turn 1 a lap later.

There was very little in the way of movement inside the top 10 in the early phase of the race before pit stops began on Lap 32.

VeeKay was the first of those to come in, locking his front tyres as he grabbed the pit lane speed limiter.

Team-mate Carpenter came to the lane too but got his car stuck in fifth gear and stalled, losing a ton of time. 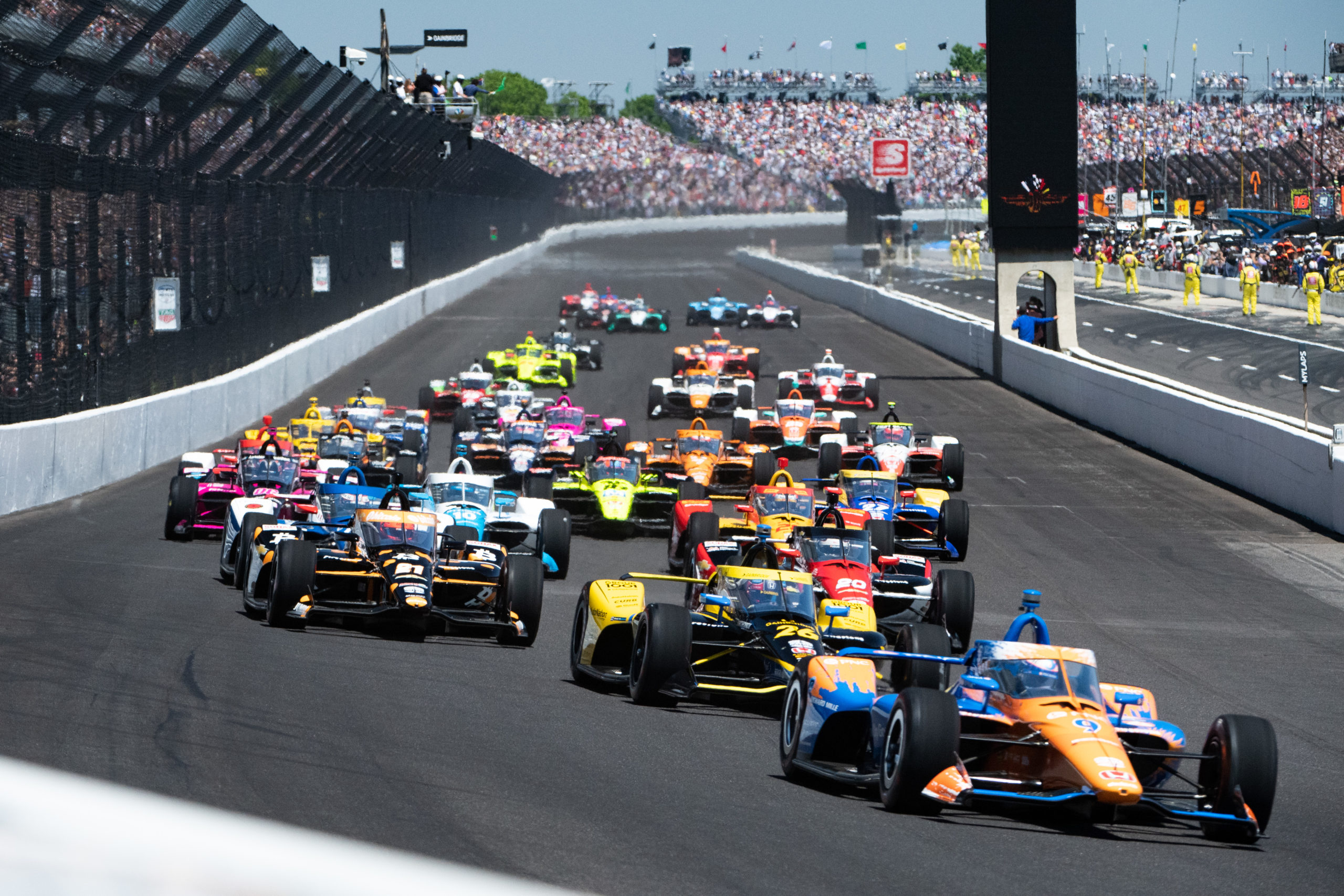 In the midst of the pit stop sequence, Stefan Wilson (#25 Andretti Autosport) lost control of his car as he tried to arrest his speed on approach to the pits.

Wilson slid into the pit wall, spinning in the pit lane and duly bringing out the first Full Course Caution on Lap 32.

With Wilson’s car stranded in the middle of the lane, the pits were closed, which compromised Dixon at the head of the field who was lean on fuel.

The crash would prove costly for Dixon, who made an emergency pit stop and coasted into his pit box with the life gone from his engine.

What was supposed to be a splash-and-dash turned into a lap long ordeal as the team struggled to get his car up and running again.

At the same time, Alexander Rossi (#27 Andretti Autosport) suffered an identical issue. In the end, both cars would go a lap down.

When the race restarted, Herta led VeeKay, who had been slowed in the pit stop sequence by the spinning Wilson.

The race restarted just shy of one quarter race distance. Castroneves was quick away, demoting Hunter-Reay and Daly to take third.

Daly would fight back though, eventually making his way to the lead on Lap 50 with team-mate VeeKay in tow.

The second round of pit stops began on Lap 68 when VeeKay came to the lane. Daly came in shortly thereafter on Lap 71.

The Honda-powered entries seemed to have better fuel mileage than the Chevrolet-powered cars, Herta going longer and pitting on Lap 77 with Castroneves in tow.

Once the pit stop sequence cycled through it was VeeKay who led Daly. Herta was third while Palou was a big benefactor, moving up to fourth. O’Ward was fifth, Hunter-Reay sixth, and Castroneves the big loser as he fell to seventh. Rahal, Sato, and Josef Newgarden (#2 Team Penske) rounded out the top 10.

Just outside the top 10, McLaughlin lay in 11th while Power climbed his way up to 13th.

After VeeKay got the undercut on Daly in the pit stop cycle, the American demoted the Dutchman to second on Lap 83.

O’Ward was quick too, passing Palou and then Herta to make his way up to third by Lap 84.

There was a close call for Power on Lap 96, who was passed by Sage Karam (#24 Dreyer & Reinbold Racing) and forced to check up. Ed Carpenter would fly by, dropping Power to 16th. 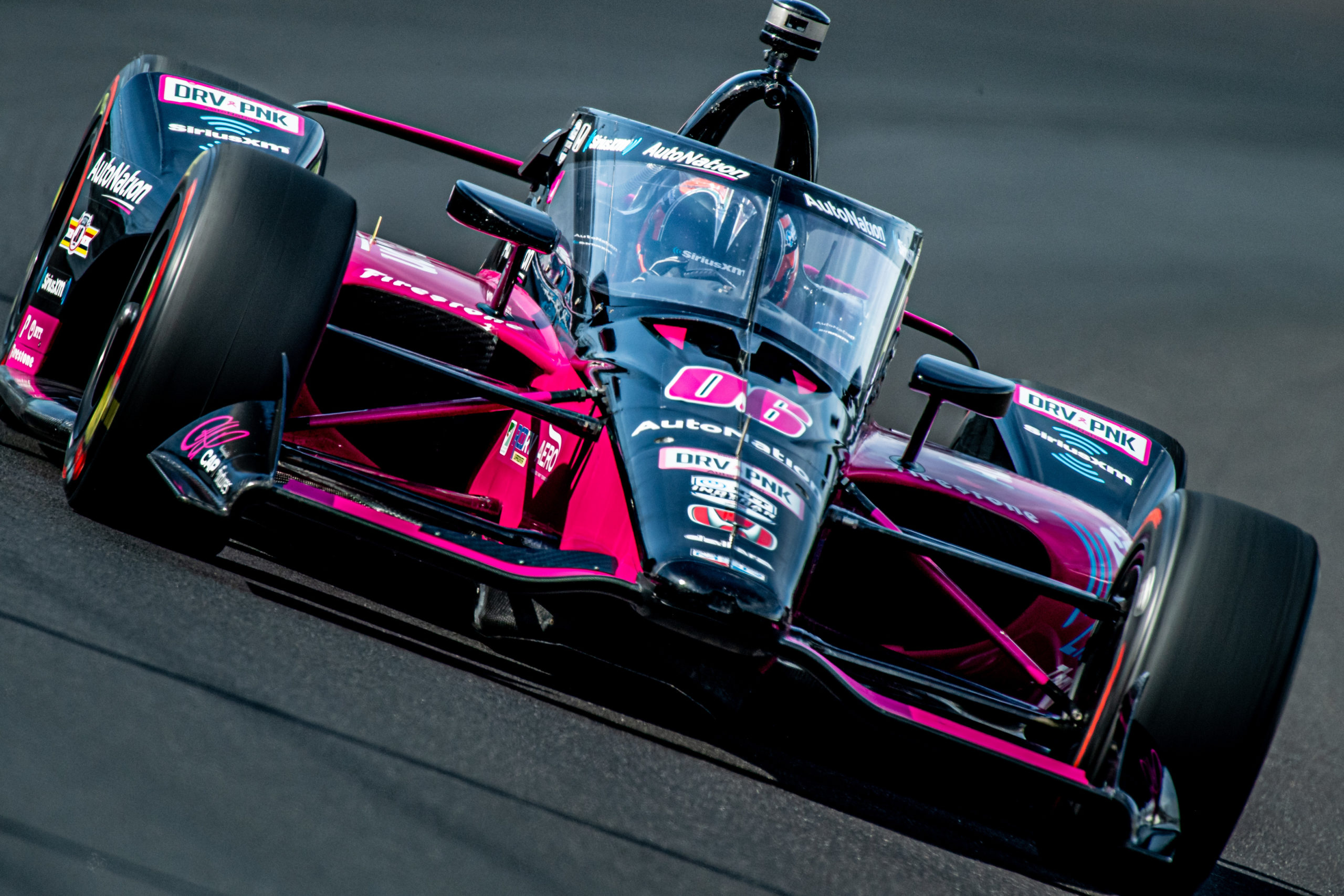 A slow stop for Daly would prove costly as he dropped towards the back end of the top 10 at the end of the next round of pit stops, briefly going down a lap.

O’Ward ran nearly 15 laps longer than Daly, pitting on Lap 114 with Castroneves and McLaughlin at his rear.

Hot on entry, McLaughlin locked up and nearly lost control of his car. The mistake stifled his hopes as he was handed a drive-through penalty for speeding, dropping him to the rear of the lead lap.

Rahal subsequently spun, slamming hard into the outside wall while Daly collected the errant tyre. Incredibly, Daly would continue without significant damage.

That brought out the second and final Full Course Caution.

The big benefactor of the Yellow was Dixon, who got himself onto the lead lap. McLaughlin, meanwhile, was still the last of those on the same page.

What followed was a duel to the final round of pit stops.

Palau, Castroneves, and O’Ward all took turns leading the race until Lap 148 when Palou pitted from top spot.

Shortly thereafter, Power’s hopes of a strong result were kiboshed when he spun entering the pit lane. He would park his car in Pagenaud’s pit before being pulled to his own stall.

Once the final round of pit stops were done, Palau led Castroneves, O’Ward, Hunter-Reay, and VeeKay.

With 31 laps to go, Castroneves surged to the lead. Moments later, drama struck for Simona De Silvestro (#16 Paretta Autosports) who spun as she pitted.

The final 25 laps of the race saw Palou and Castroneves swap spots for the effective lead of the race. Palau held sway with 21 laps to go, then Castroneves took it back with 18 remaining. 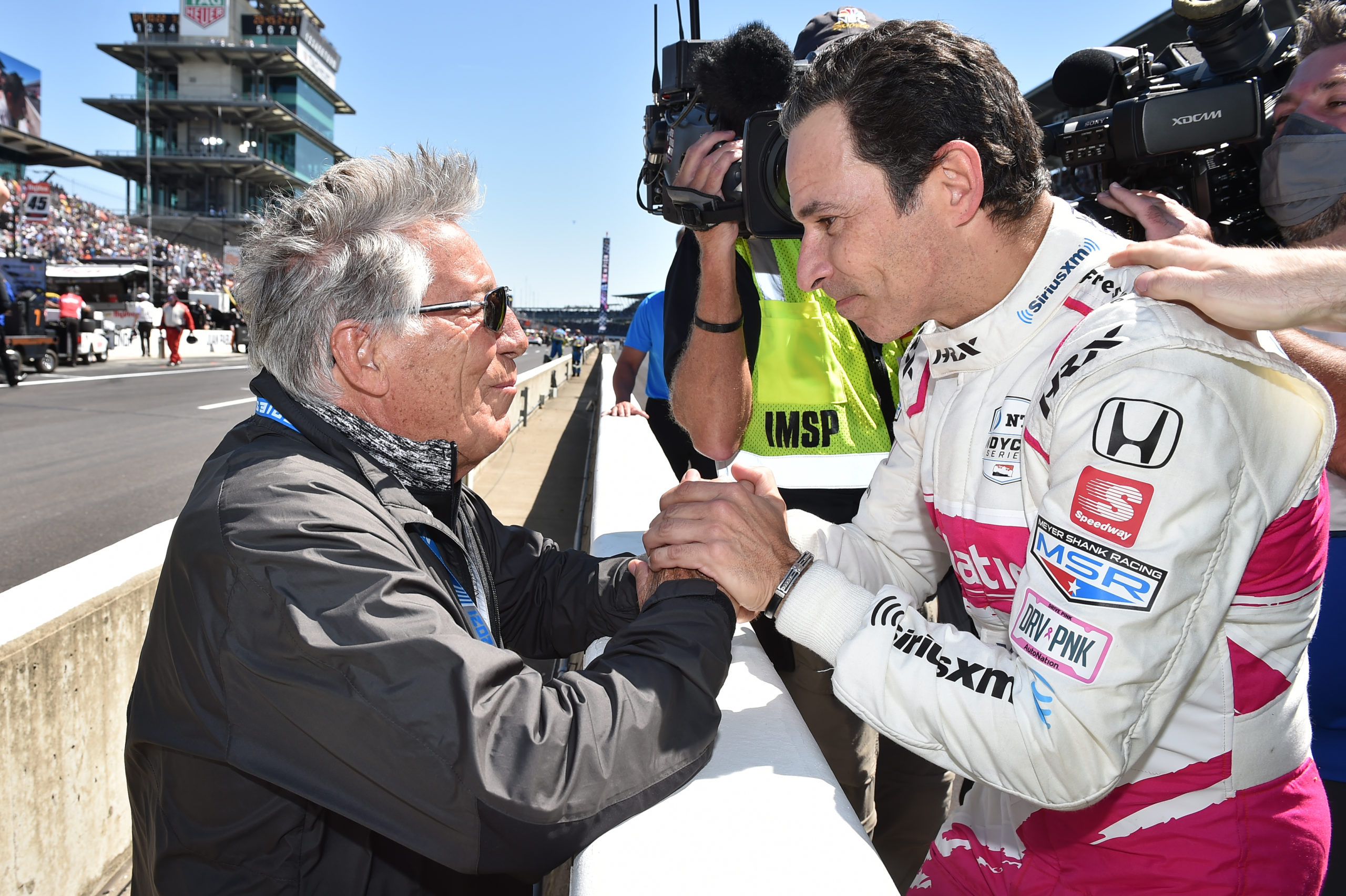 The pair traded places while O’Ward watched on. McLaughlin would pit with nine laps to go from fifth having just let his team-mate Pagenaud by.

Felix Rosenvqvist (#7 Arrow McLaren SP) sought to go off-strategy, but with seven laps to go was forced to pit from the lead.

Similarly, Sato came into the lane with five to go, giving Palou the lead, Castroneves second, and O’Ward third.

With three laps remaining Palou had the advantage over Castroneves. However, a run out of the final corner saw Castroneves surge into the lead with two laps to go.

As the leaders came upon lapped traffic with one lap remaining, Palou couldn’t find a way through. Ultimately, Castroneves crossed the line to win by just under half a second.

Former series leader Dixon eventually finished 17th while countryman McLaughlin was 20th and on the lead lap. Power would finish 30th and three laps down.

The IndyCar Series heads to the Belle Isle Street Circuit in Detroit for the Chevrolet Detroit Grand Prix on June 12-13.

The series is now led by Palou, who won the season-opener at Barber Motorsports Park.