Bagnaia: ‘Not correct’ to race after Dupasquier tragedy

Bagnaia: ‘Not correct’ to race after Dupasquier tragedy The minute’s silence before the MotoGP race

Francesco Bagnaia believes that it was “not correct” for the Mugello MotoGP race to proceed after the death of Jason Dupasquier from a crash on the afternoon prior.

The 19-year-old Swiss rider had succumbed to injuries sustained in a multi-rider incident in Moto3 qualifying, with the tragedy announced between Sunday’s Moto3 and Moto2 encounters.

Before that news filtered through, Dupasquier’s PruestelGP team had pulled out of the day’s lightweight class race, sidelining his team-mate Ryusel Yamanaka, and Thomas Luthi had given up on riding in the Moto2 race to be with the family in hospital.

A minute’s silence was held on the grid in the lead-up to the MotoGP race, 15 minutes before that contest got underway.

Bagnaia, who dropped his Ducati while leading on Lap 2, said it should not have gone ahead.

“I asked to not race today,” revealed the Italian.

“It was not correct for me. If it happened to a MotoGP rider, we wouldn’t race. I’m not happy about the decision of someone to let us race after news like this.

Adding to the anguish was the timing of the announcement from the hospital, during the afternoon’s racing.

“After the news I said to my team, to Davide [Tardozzi, Ducati Lenovo Team manager] that I was preferring to not race. [But] this is our work. We have to do it,” added Bagnaia.

“The hospital has to declare when someone passes away. It was a situation where it was very difficult.

“The thing I don’t accept is that we have raced today. Like I said before, if it happened to a MotoGP rider, we wouldn’t race today.” 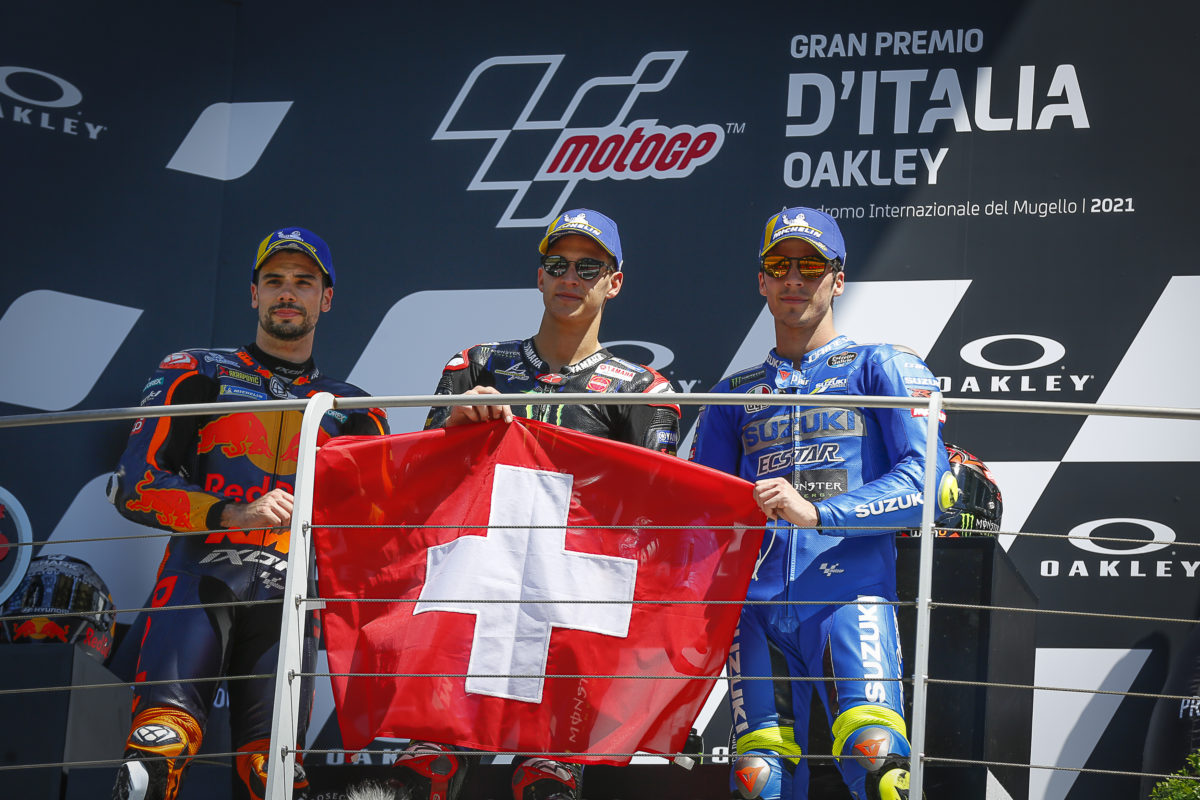 The Tech3 rider also criticised the decision to hold MotoGP Free Practice 4 and its qualifying sessions immediately after the Moto3 session in question, as is standard practice.

Petrucci drew attention to the fact that he and his peers went out on a race track where, only minutes earlier, Dupasquier had been laying before being airlifted to hospital.

“Today first of all was a really, really difficult race. But not for the sporting side. On the human side I don’t feel really, really clean,” said the two-time race winner.

“I just think that we are racing on the same track that almost 24 hours ago someone like us died.

“I mean, is it a different life because it’s a Moto3 rider, he’s more or less important? I don’t think so.

“So, knowing [that Dupasquier had died] or not, yesterday the helicopter left the track and three minutes later we put the leathers on and went out like nothing happened.

“Nobody asked to have a meeting with us today to say ‘One of us is not with us anymore; can we talk a bit if it’s correct for his family or his friends to continue to do this?’ Nobody asked us.

“The most difficult part was yesterday; that you see a body on the track, you’ve got the same leather suit, and after three minutes pit lane opens and you pass the point where a rider [may have] died.

“I mean, we talk a lot about safety, about everything but we pass [the same spot] after three minutes. There was even the flag with red and yellow stripes because maybe there were things they need to use to recover the body. We pass through them like always.

“I don’t know. At least make a meeting. Share opinions and comments would be better. I didn’t know him personally, but imagine being one of his friends; I think you’d get rid of the bike today.

“I don’t know if you just think about the bike or about racing, about MotoGP, Moto3, tyres, performance, like this… I feel quite dirty today.” “Today was very difficult because after what happened to Jason yesterday the question is, why [do] we race? Everything loses sense,” said Rossi, 42 years old and in his 26th season of grand prix racing.

“I think anyway it doesn’t make sense not to race, because unfortunately what we do today doesn’t change what happened to Jason yesterday.

“But it was very bad. Very tough. Unfortunately, I already knew yesterday night that the situation of Jason was desperate. Because the head took a big concussion.

“That is one story and another story is when you understand that [he’s died].

“It’s difficult for everybody also for the young riders. But what can you do?

“You have to try to concentrate at the maximum. When you are on the bike, if you are not concentrated it’s dangerous.

“So, you try to do the same things you always do and just think about the race, but sincerely it was very difficult.”

Morbidelli was philosophical about the tragedy, and continuing to race on the day Dupasquier’s death was confirmed.

“I can understand why some riders don’t want to race,” he remarked.

“It’s a feeling that every rider has for sure on the grid and it’s a feeling you have to fight against when you actually have to race. Because finally not racing doesn’t change anything.

“At least you can show the people at home the good as well as the bad parts of our wonderful sport.

“[But] it’s very difficult to start a race after such bad news. You never get used to this kind of news and it’s always a big [weight] on your mind and on the trust that you have to go on the bike again and do your job and your passion.