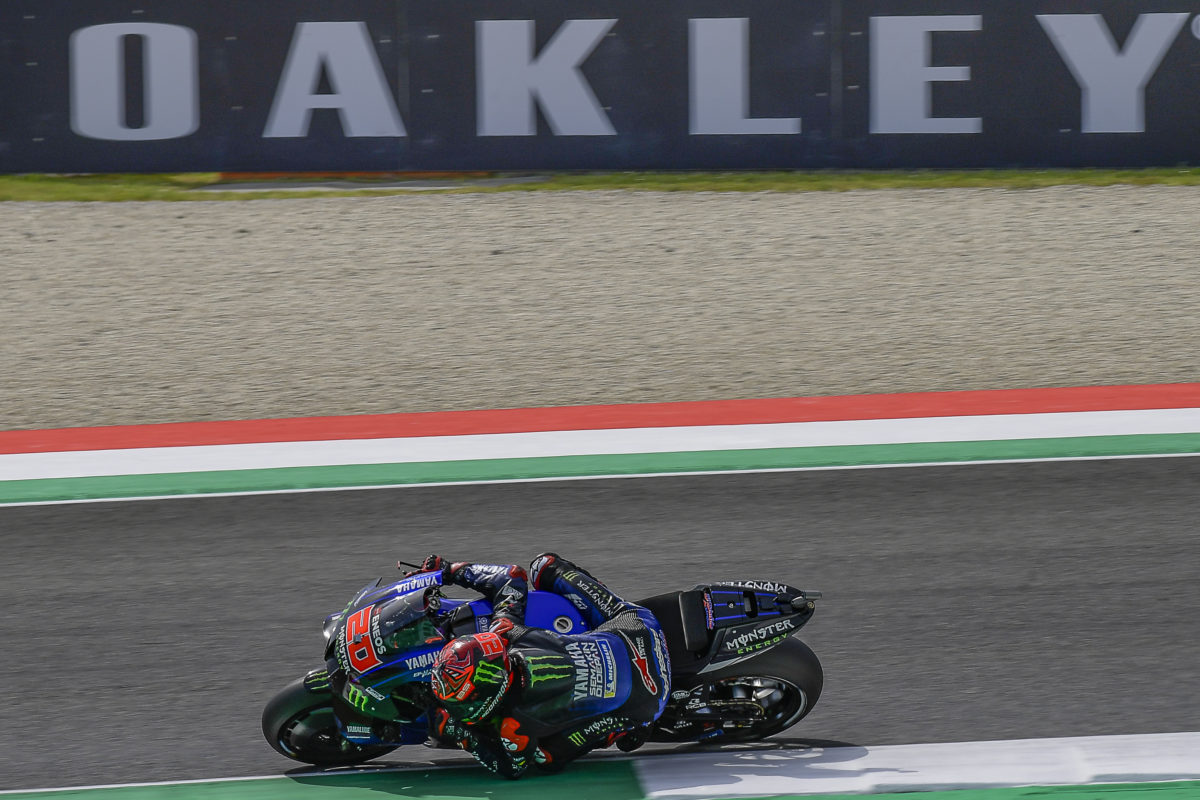 Fabio Quartararo has won the Italian MotoGP after Francesco Bagnaia crashed out of an early lead at Mugello.

Quartararo led the bulk of the 23-lap contest on his Monster Energy Yamaha to extend his championship lead, while Suzuki Ecstar’s Joan Mir inherited second position after the chequered flag.

Miguel Oliveira had crossed the finish line in second spot but was officially third after copping a position drop for exceeding track limits on the final lap, with Johann Zarco the lead Ducati rider in fourth on his Pramac entry.

Zarco is, however, the subject of a post-race investigation after a bizarre formation lap incident in which he was slammed into by Enea Bastianini as they rolled up to the starting grid.

Alex Rins was in the fight for the podium placings on the second factory Suzuki but went down inside the final five laps, while Marc Marquez (Repsol Honda) made an early exit.

At the start, Quartararo had used Yamaha’s new holeshot device to good effect but it still was no match for Ducati power.

Bagnaia pulled alongside on what is only a short uphill run from the grid to the braking zone at San Donato and took the lead on the inside line ahead of #20, with Oliveira slotting into third, from Zarco and Miller.

Zarco passed Oliveira at Correntaio (Turn 12) on Lap 1 while Binder quickly dropped from sixth towards the back of the top 10.

He was ninth when contact with Marc Marquez early on Lap 2 put the six-time premier class champion and his Honda onto the floor, and Franco Morbidelli (Petronas Yamaha SRT) was forced through the gravel in evasive action.

A more significant crash unfolded just up the road at Arrabbiata 2 when Bagnaia turned in from slightly too wide and lost the front of the #63 Ducati.

That left Quartararo in first position, but only until Zarco blazed by at the top of the hill at the start of Lap 3.

The championship leader reclaimed the ascendancy on their way back down the hill at Savelli (Turn 7), only for Zarco to crank open the throttle and move back into top spot as they arrived at San Donato again on Lap 4.

Quartararo responded even sooner after that pass, sneaking down the inside at Poggio Secco (Turn 3), then critically managed to stay ahead at the start of Lap 5.

He moved his advantage over Zarco past one second on Lap 6, and it was over 2.5s after 10 laps.

Oliveira continued to circulate in third spot but Miller had been coming under pressure from both of the factory Suzuki riders.

Rins’ passes of #43 at Bucine on consecutive laps were futile given how much grunt the Australian boasted for the climb up the main straight, but then the Spaniard fashioned a move at Materassi (Turn 4) on Lap 8 and that was that.

Mir stuck with his team-mate by jamming #36 down the inside of Miller six corners later, and Binder followed, relegating the winner of the last two grands prix to seventh.

Mir then got by Rins at San Donato on Lap 11, and set about reeling in Zarco and Oliveira.

It was a four-rider battle for second spot, rounded out by Rins, within laps, and Oliveira went down the inside of a struggling Zarco at Palagio (Turn 11) on Lap 16.

Mir did likewise a lap later, and then Rins was past the #5 Pramac Ducati at Savelli on Lap 18.

Zarco tried to reclaim fourth position at San Donato on Lap 19 but ran wide, meaning Rins should have been free to pursue his team-mate and Oliveira in the battle for the minor placings.

Instead, #42 threw it away again, this time losing the front wheel at Bucine at the end of that lap.

Quartararo’s lead peaked at a touch over four seconds before he seemingly managed the margin to the finish, while Oliveira held off Mir to take the chequered flag in second position, albeit illegally so.

UPDATE: Oliveira reinstated to second position (per above)

Pol Espargaro was lead Honda rider home in 12th after Takaaki Nakagami (Idemitsu LCR) crashed his RC213V, while Morbidelli finished one position outside the points.

Bastianini is another leaving Mugello emptyhanded after the remarkable collision before the race had even begin.

Replays showed the Avintia Esponsorama Ducati rider pulling a ‘stoppie’ as he made a futile attempt to avoid clattering into the rear of Zarco’s own Desmosedici on the starting grid, leaving the latter with minor damage on the rear end of his bike.

Round 7 is the Catalan Grand Prix at the Circuit de Barcelona-Catalunya, next weekend (June 4-6).