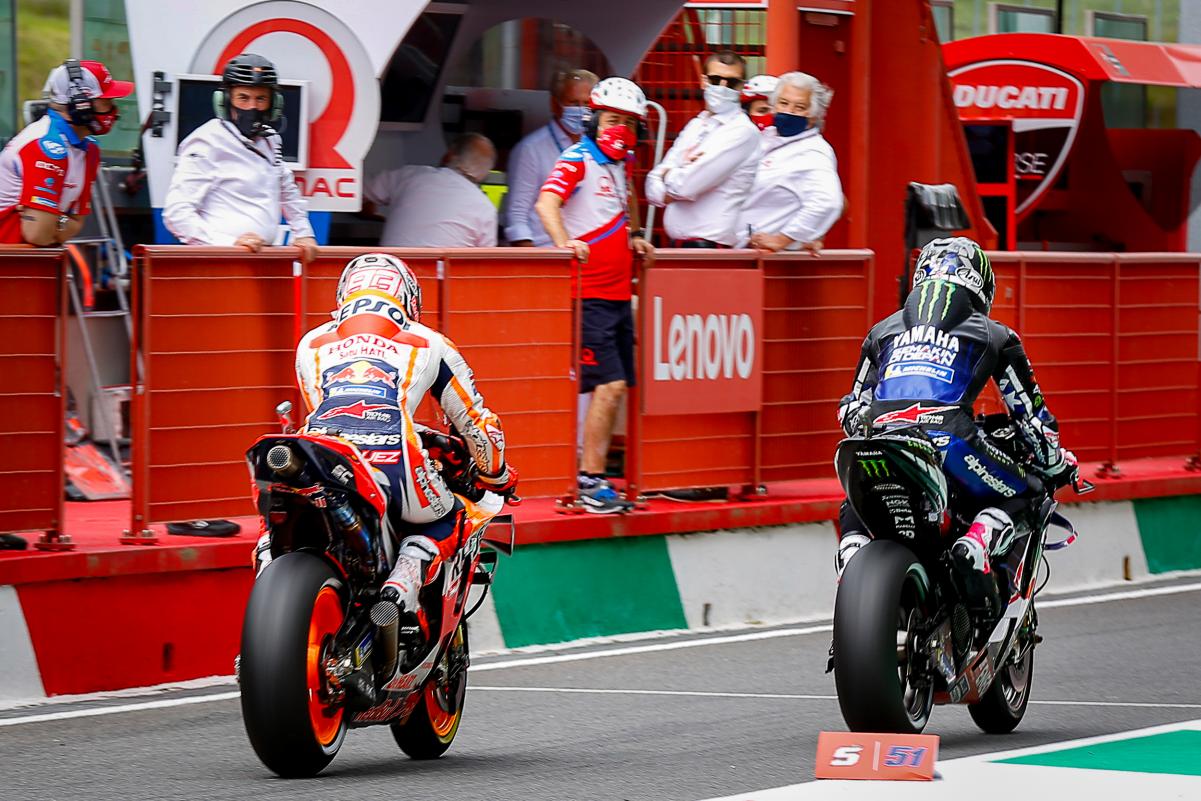 Marc Marquez admits that continually following Maverick Viñales in MotoGP qualifying at Mugello was “not completely fair” but says his physical condition left him little choice.

Marquez and Viñales were involved in sometimes comical scenes during Qualifying 1 for the Italian Grand Prix, from which the latter would not progress.

The #93 Repsol Honda was virtually glued to the exhaust of #12 for the bulk of the session, even when Viñales used the shortcut to enter pit lane early in his second run.

Monster Energy Yamaha’s team manager, Massimo Meregalli, declared the tactics “not fair” when speaking on the television world feed just after Q1, and expressed a hope that Race Direction would look into it.

Marquez had a somewhat similar view, although he reasoned that what he did was just inside the bounds of regulations.

The six-time premier class champion revealed that he nevertheless apologised to Viñales, but felt he had to follow someone given his physical condition remains poor after a long period out due to injury.

“Yeah, I met Maverick before entering the TVs,” recounted Marquez.

“First of all, I apologised because I know it was not completely fair and what I said is ‘You have reason to be angry’.

“But in another hand, today in the morning I felt not so bad, in the afternoon I felt really, really bad.

“I mean, for some reason about physical condition, the bike, everything, I felt not so good and I stopped in FP4 before the end and I said to the team ‘I don’t feel the bike, I don’t feel anything, we need to follow somebody’.

“We checked the list; the fastest guy was Viñales. If it was another one, we would have chosen another one.

“Then I followed him, it was the tactic because it was the only way to improve.

“I would like to be in another level and another position to push in front and have the others follow me like many times in the past.

“But I’m not like this. I know, because I had that feeling in the past, how Maverick is feeling and that’s why I apologised.

“What I did was to try to find the perfect situation to do my 100 percent and get the best result possible.”

Marquez got through to Qualifying 2 and ended up 11th on the grid for tonight’s 23-lapper, while Viñales is set to start 13th.

The Yamaha pilot was seen gesticulating at #93 during the session in question, but conceded that his early exit from Saturday proceedings was his own fault.

“I don’t have any comment on that, honestly,” said Viñales of Marquez’s antics.

“Just we were not fast enough. Honestly, after FP1 I never had again the feeling, we just go backwards instead of forwards. So, no excuses, we were slow and that’s it.

“I was concentrated enough. I make a good lap, just not enough.

“I just make a nice lap, but then [I was] not disturbed, I knew what was behind, but I also knew doing a good lap I was able to go to Q2. Just, I wasn’t fast enough.

“So, he didn’t disturb me. He played his cards really well and that’s it. Tomorrow is another day.”

Viñales most likely would have gone directly into Q2 had he not crashed at the end of Free Practice 3.

He still looked like progressing thanks to his final flyer in the opening stanza of qualifying but ended up wide of the line at the final corner.

The nine-time premier class grand prix winner claims, however, that the lap was in fact not good enough and he knew it.

“I just slowed down,” he stated.

“I was sure that I was slower than the previous lap, so basically I just went out [wide] to prepare another lap, but yeah [I ran out of time].”

Ironically, it was Quartararo who was particularly affected by traffic in Friday practice as several riders sought to follow a rival in scenes which Jack Miller branded “ridiculous”.

The sixth MotoGP race of the season is scheduled to start tonight at 22:00 AEST.