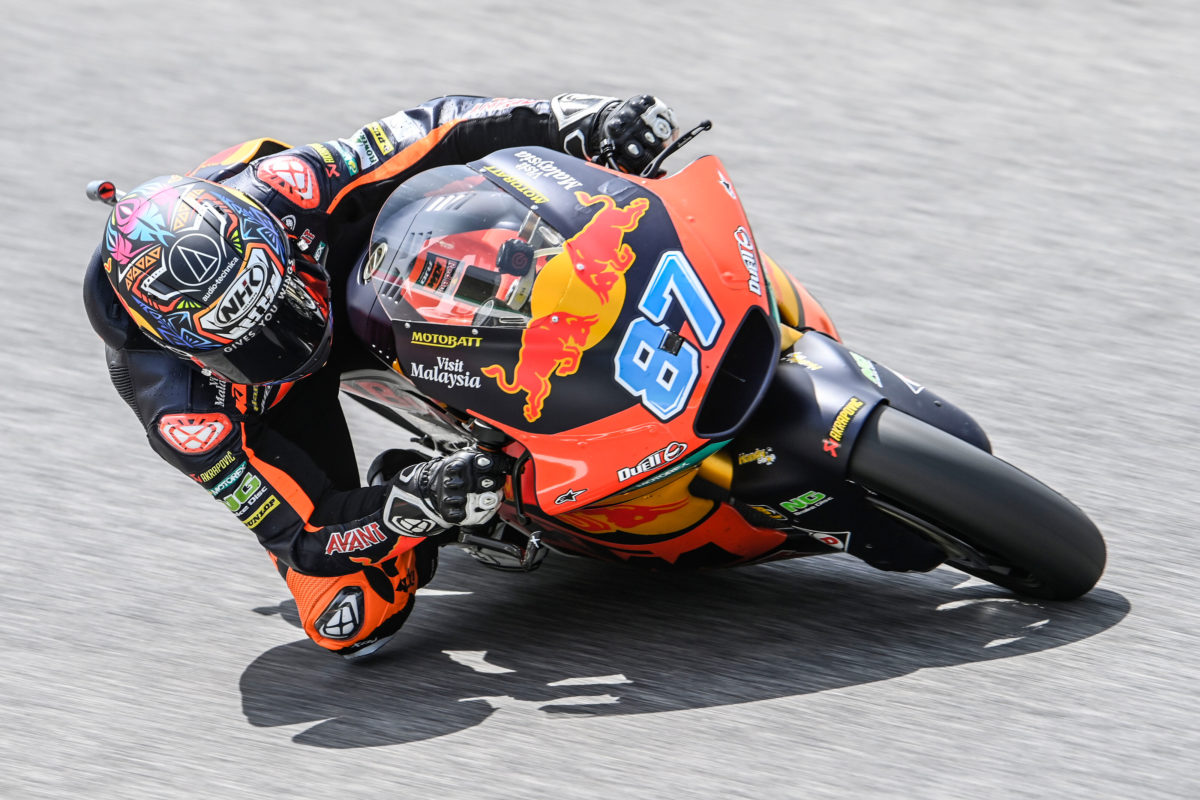 Remy Gardner has claimed a first win of the 2021 Moto2 season by passing Red Bull KTM Ajo team-mate Raul Fernandez on the final lap at Mugello.

Gardner ran in the podium positions throughout the 21-lap contest but did not look a threat for Fernandez, the long-time leader, until the final stages of the Italian Moto2 Grand Prix.

In a battle which also determined who leads the championship on the way to the Circuit de Barcelona-Catalunya next weekend, the Australian dived down the inside of the rookie Spaniard on the sixth-last corner of the race and then prevailed in the drag to the chequered flag.

Fellow title contender Sam Lowes (Elf Marc VDS) was running second when he crashed with about a quarter of the contest to go, and thus did not score points.

Fernandez had led the field away from pole position while Gardner took up second spot from fourth on the grid.

Jorge Navarro (MB Conveyors Speed Up) got his nose ahead of Gardner as he tried to go around the outside of the first corner, but he could not make the move stick and instead soon dropped a spot to Tony Arbolino (Liqui-Moly Intact GP).

Lowes ran in fifth on the opening tour before he went down the inside of Navarro into San Donato at the start of Lap 2, and Fabio Di Giannantonio (Federal Oil Gresini) would quickly follow him through.

Lowes pulled off a similar move on Arbolino on Lap 3, at which time Gardner was about 0.6s up the road, before Di Giannantonio also got by Arbolino at San Donato on Lap 4.

Fernandez had crept to more than half a second away from Gardner on Lap 5, and the margin continued to grow.

It was a touch over 1.3s at the start of Lap 10, when Lowes went for a pass on Gardner at San Donato, and almost two seconds once the Briton finally cleared the Australian into Materassi (Turn 4).

Lowes brought the gap back under a second on Lap 13, the same lap on which Di Giannantonio crashed from fourth spot at Bucine (Turn 15).

The margin was 0.9s when disaster struck for the Marc VDS rider on Lap 16 as he folded the front end on #22 and went down at Arrabbiatta 1.

That meant Gardner was back into second spot, 1.4s behind the other Ajo KTM entry of Fernandez, with Joe Roberts (Italtrans) third having not long passed Marco Bezzecchi (Sky Racing Team VR46).

Gardner was back to one second behind #25 with four laps to go, and on his tail on the third-last lap.

He got a better run of Arrabbiata 2 on Lap 21 and put #87 down the inside of the Spaniard’s machine, before taking the chequered flag just 0.014s ahead of Fernandez.

By then, Roberts and Bezzecchi had traded third spot multiple times more and while the former was ahead at the finish line, he was slapped with a position drop for exceeding track limits by the narrowest of margins on the final lap.

Bezzecchi therefore stands on the rostrum on home soil, with the American fourth and Marcel Schrotter (Liqui-Moly Intact GP) rounding out the top five.

Having challenge for second at the beginning, Navarro was among those to crash out, from eighth position on Lap 5.

Gardner’s championship lead is now six points with Round 7, the Catalan Grand Prix, coming up on June 4-6.