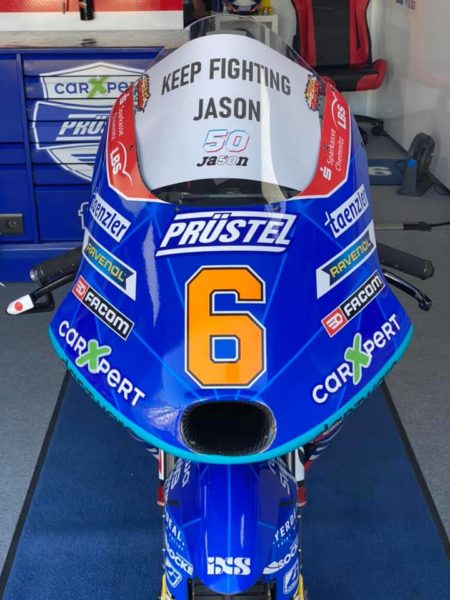 PruestelGP has pulled out of tonight’s Moto3 race completely as one of its riders, Jason Dupasquier, lays in hospital in a serious condition.

The 19-year-old crashed at the end of Qualifying 2 at Italy’s Mugello in an incident which also involved Ayumi Sasaki and Jeremy Alcoba.

Sasaki was able to walk from the scene despite a hard landing on the tarmac after striking Dupasquier’s bike, but Dupasquier himself continued to lay on the track surface until he was airlifted to a hospital in Florence.

Thus far, little is known about the Swiss rider’s injuries except that his condition was “very serious”, and the television replays that went to air were inconclusive as to exactly what transpired.

What has been confirmed is that Ryusel Yamanaka, who qualified 25th, will not take the start of the lightweight class race on the #6 PruestelGP entry.

“PruestelGP decided not to race today in the Italian GP,” read a brief statement from the German squad.

“The situation of [Jason Dupasquier] is still critical and all our thoughts are with him.

Moto2 has also been affected by the incident, with Thomas Luthi pulling out of his race also.

“[Thomas Luthi] decided not to race today in the Italian GP and heads to the hospital to be close to Jason Dupasquier’s family,” advised the SAG Racing Team on social media.

Alcoba was the third party in the crash, but his recount suggests he went down as a result of clamping on the brakes in response to what had already unfolded ahead.

@ThomasLUTHI decided not to race today in the #ItalianGP and heads to the hospital to be close to Jason Dupasquier’s family. pic.twitter.com/LIycnTJQUf