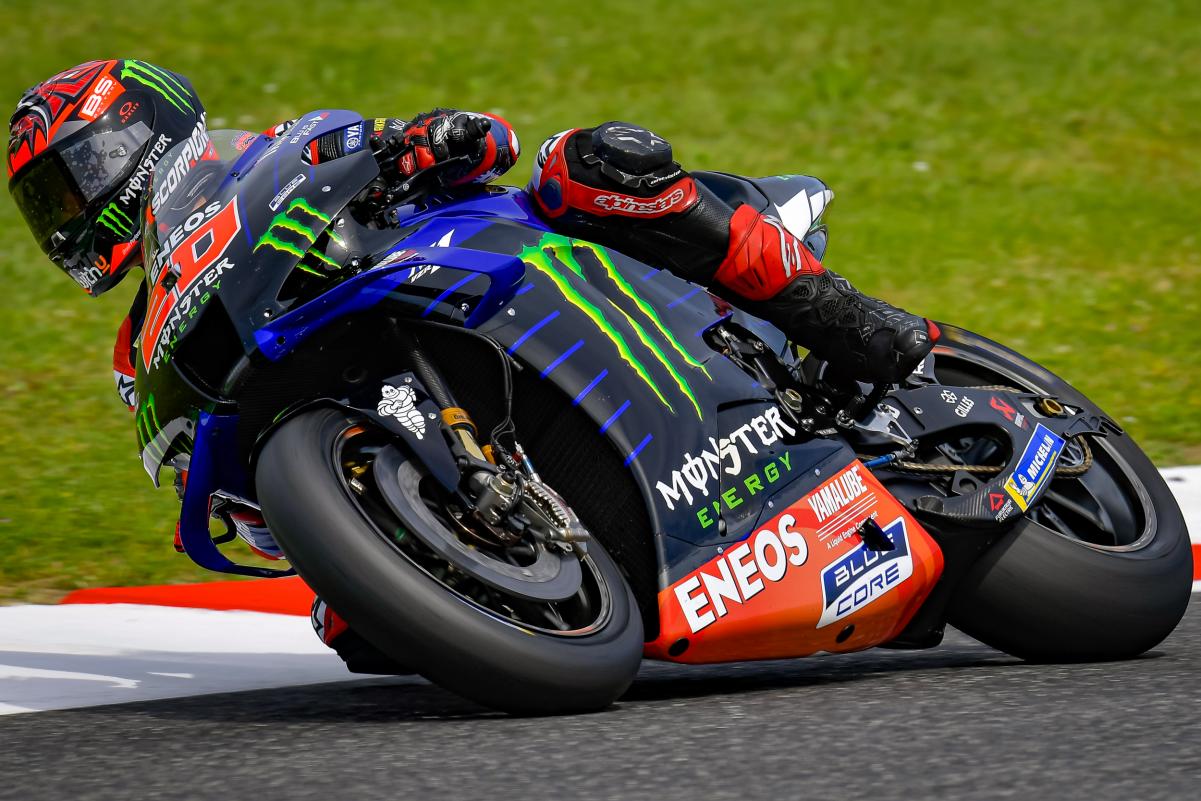 Fabio Quartararo has stormed to pole position for the Italian Grand Prix while Jack Miller ended up fifth in qualifying.

Quartararo, the championship leader, broke Mugello’s all time lap record with a 1:45.187s to claim his fourth pole in a row on his Monster Energy Yamaha.

Maverick Viñales (Monster Energy Yamaha) will start all the way back in 13th after costly errors in both Free Practice 3 and then Qualifying 1.

Miller was fastest through the first flyers in Qualifying 2 with a 1:45.796s before Q1 graduate Aleix Espargaro got a tow from Bagnaia (Ducati Lenovo Team) to move into top spot with a 1:45.651s.

Miller improved to a 1:45.789s to consolidate second position, but Quartararo subsequently laid down a 1:45.481s.

That put the Frenchman in first position at the end of the first runs, from Aleix Espargaro, Miller, Bagnaia, and Alex Rins (Suzuki Ecstar), as Marc Marquez (Repsol Honda) remained in the garage after topping Q1.

Miguel Oliveira (Red Bull KTM) jumped onto the provisional front row with a 1:45.745s at the start of his second run, while Quartararo tightened his grip on pole in the final two minutes with the 1:45.187s.

Binder moved up to third with a 1:45.743s just prior to the chequered flag, after which Miller was still a threat to pinch pole from #20.

However, the Queenslander lost around half a second in the third sector and as Bagnaia moved to second spot with a 1:45.417s, Miller could only go fourth with a 1:45.598s.

Even then, Zarco was following #43 and almost instantly usurped him with a 1:45.432s to put the #5 Pramac Racing entry onto the outside of the front row.

Marc Marquez took 11th, one position up on Repsol Honda team-mate Pol Espargaro in a session which ran in dry conditions despite the threatening skies.

Viñales’ woes can be traced back to the latter minutes of FP3, when he crashed at Correntaio and missed the cut for Q2 as a consequence.

He then ended up in a cat-and-mouse game with Marc Marquez all the way through Q1, and was relegated to third by Aleix Espargaro after the chequered flag had come out.

The Yamaha rider was, however, still on a hot lap and looked to be able to bump #41 back out of the top two when he went fastest to the third sector.

However, Viñales ran wide at the final corner and will thus start from 13th, next to Enea Bastianini (Avintia Esponsorama Ducati) and Takaaki Nakagami (Idemitsu LCR Honda).

Valentino Rossi (Petronas Yamaha SRT) could only improve his starting berth to 19th, late in the piece, with the rest of the grid being Iker Lecuona (Tech3 KTM), Lorenzo Savadori (Gresini Aprilia), and Alex Marquez (Castrol LCR Honda).

MotoGP qualifying had started late due to a nasty crash in the Moto3 qualifying session which preceded FP4 for the premier class.

Jason Dupasquier was airlifted from the scene of the incident to a hospital in Florence for further examination after a multi-bike crash at Arrabbiata 2 at the end of Q2.

The Swiss rider had lost control on exit and his errant bike was hit by Ayumi Sasaki, who was thrown over the front of his own machine as a consequence.

While Sasaki hit the track surface with a thud, he and Jeremy Alcoba, whose involvement in the incident was not clear on replays, were advised by the medical director as being OK.

Dupasquier, however, remained on the track where he had fallen until he was taken away in a helicopter.

MotoGP race start is scheduled for Sunday at 22:00 AEST, with 23 laps on the cards.