A pack of MotoGP bikes at Mugello

Jack Miller is among those calling for harsher penalties for slow riding after some of MotoGP’s stars were among those dawdling in search of a tow in practice at Mugello.

The long, uphill straight at the Italian Grand Prix venue means that slipstreaming could become a crucial tactic in qualifying tonight (AEST) and that was playing out in Friday’s two sessions.

Fabio Quartararo was among those affected, the Frenchman clearly incensed when he had to abandon a flying lap having come up on a traffic jam late in Free Practice 2.

Pit lane starts or long lap penalties are handed out for slow riding in Moto2 and Moto3, relatively frequently, something which Miller would like to see in the premier class.

The Australian identified Marc Marquez and Valentino Rossi as among those riding in a “ridiculous” fashion in practice at Mugello.

“We should be the ones to set the example, in MotoGP,” said Miller.

“I think there were at least eight guys sitting there waiting; the two factory Hondas [Marc Marquez, Pol Espargaro], a Petronas Yamaha with nine world championships [Rossi], and his brother [Luca Marini]. There were so many guys in one group.

“In the end I said ‘Come on boys, follow me’… There is no need for it. They are just looking for a tow and it’s ridiculous.

“If you cannot do the lap time, then don’t do it.

“I understand if there is one of two riders, but a group of eight? That shouldn’t be on, and I think we need to punish and set an example that even in MotoGP they are getting this [pit lane start] as well.

Quartararo, the championship leader, thinks the tactic is “pointless” in practice anyway.

“I [finally] made a lap but honestly I don’t know how, because there were many [slow] riders in Sector 1, Sector 3, Sector 4,” recalled the Monster Energy Yamaha rider.

“We are going so fast here, and it’s only FP2. For me it’s pointless to do it at that moment. In qualifying I can understand, but not right now.”

Quartararo reasoned that the same sanctions as applied in Moto2 and Moto3 should be used in MotoGP given it is more dangerous. 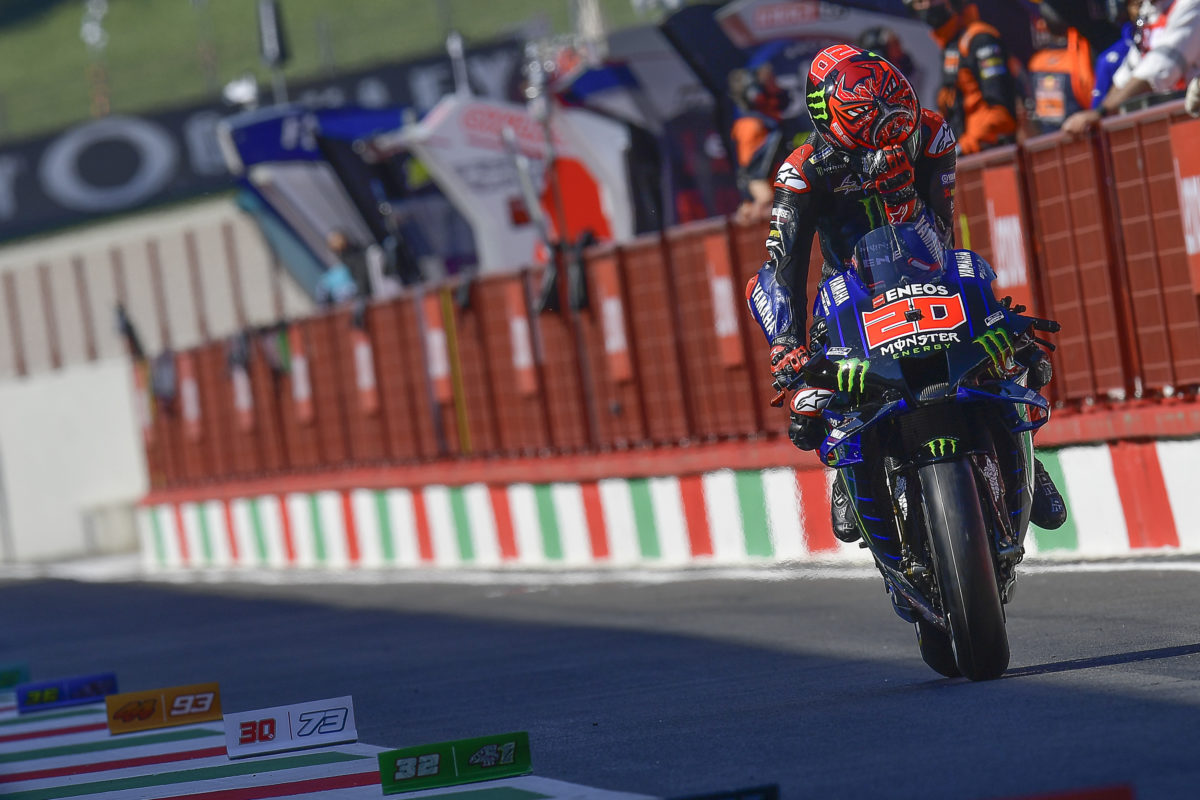 “For me, what the guys do in Moto3 and Moto2, to start from pit lane, why not in MotoGP?” he asked.

“We are all the same. We are all racing in the world championship.

“Yes, MotoGP’s a different category, but we are riding faster than them, it’s more dangerous, so for me it should be the same as Moto3 and Moto2.

“Every time I’m doing a lap, I’m not disturbing anyone. For me, OK, in qualifying it can happen, but not during FP2, being in the middle of the track on the last laps.

“The last laps is where you are really on the limit and you find everyone in the middle of the track, so I think it’s not fair and dangerous.”

“It’s a shame because I was improving in the first sector quite a lot and then in the second sector I found a lot of riders ‘stopped’ and had to stop also to avoid a dangerous situation,” said the Suzuki Ecstar rider.

“I think we have to take the same measures in all the categories.

“It’s not really nice to see a lot of bikes stopped [in the track].

“Maybe they won’t see you because they are a lot slower than you and it’s a dangerous situation for sure.”

According to Franco Morbidelli, who used a shortcut to by-pass the traffic, the slipstream is not the only benefit of following another rider.

“Today was tricky to have a clean lap and many people were waiting for some tows, but Mugello is a track that if you have a reference [ahead] you can make a lot of difference,” explained the Petronas SRT Yamaha pilot.

“It’s not just about the slipstream, it’s about reference and going through a line that you already saw.

“It can make a lot of difference so maybe for this reason there were many people sitting around the track today.”

Morbidelli and Quartararo ended up third and fourth on combined times after the first two practice sessions at Mugello.

Miller ended up 10th-fastest, 0.541s away from pace-setting Ducati Lenovo team-mate Francesco Bagnaia, but suggested he had not gone for a “real time attack” yet.