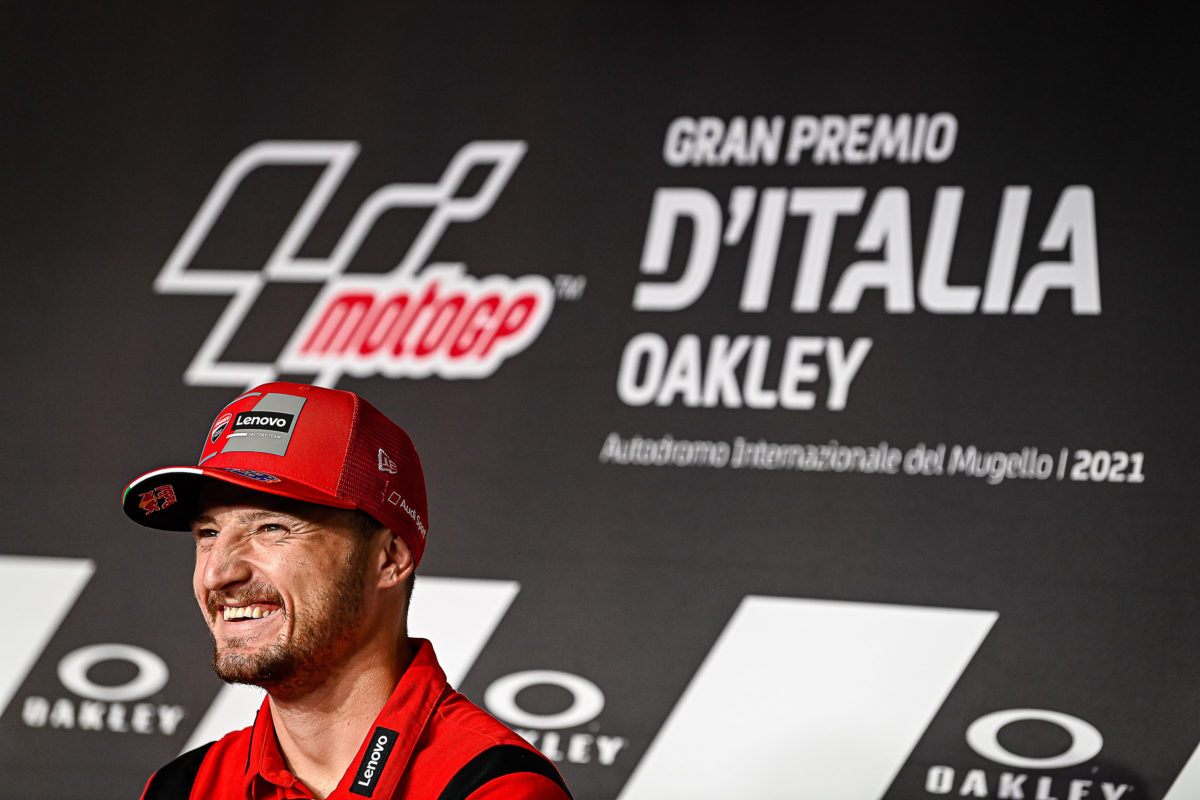 Jack Miller would prefer to not think about the opportunity to win a third MotoGP race in a row at this weekend’s Italian Grand Prix.

Miller took victory in the Spanish and French Grands Prix, and has now arrived at a Mugello circuit which heavily favours his Ducati due to its long, uphill main straight.

The Queenslander succeeded Casey Stoner as Australia’s latest MotoGP race winner in 2016, and it had been more than nine years since the latter last went back-to-back, at Jerez and Estoril.

Stoner also won three straight on four occasions in his career, in 2007 and 2008 on a factory Ducati, and twice in 2011 on a factory Honda.

Miller, however, would prefer to focus on just the task ahead of him at Mugello rather than the idea of emulating his champion compatriot in even rarer circumstances.

“That was basically the time when I started watching racing,” said the 26-year-old in reference to the early stages of Stoner’s MotoGP career, which yielded a title with Ducati in 2007.

“I started racing the following year but we all started really watching in 2007; of course, with an Aussie doing well.

“I unfortunately missed most of Mick’s [Doohan] era. Seeing an Aussie do well is what turned me on to the sport.

“I mean, I prefer to not even think about the whole three on the trot or anything like that; I’m just happy to be here and be in one piece and try to do a decent weekend.

“No, I haven’t spoken to Casey recently. To be honest, I’ve been flat out trying to get back to as many people as possible but I’m not really good on my telephone, as most people know. I’m trying my best though.”

Miller’s purple patch was rewarded by way of Ducati exercising its option to retain #43 for the 2022 season, a decision which was confirmed earlier this week.

He says that will free him to enjoy his racing.

“If you’re unhappy in my situation I mean, you’ve got something going wrong,” declared Miller.

“I’ve had a pretty phenomenal couple of weeks and it feels unreal to get the contract signed up and not have to worry about that for another eight months or so and just focus on what I enjoy the most, which is riding my motorcycle.”

The works Ducati squad has won the last three Italian Grands Prix, with Andrea Dovizioso in 2017, Jorge Lorenzo in 2018, and Danilo Petrucci in 2019.

Mugello is, however, hardly a happy hunting ground for Miller himself.

It is, in fact, statistically his worst track on the calendar with a return of just a single point from five MotoGP races at the Tuscan circuit.

His other four results there are DNFs, including a crash while in a five-rider battle for the lead in the most recent Italian Grand Prix, in 2019.

“Mugello demons? I mean it’s a place I love, as I think everyone else does,” remarked the Ducati Lenovo Team rider.

“Just arriving here in the beautiful landscape of this place, we definitely missed it last year.

“My report card of Mugello is not the most pleasant one, I’ve always been pretty quick here but just haven’t been able to see too many chequered flags.

“I’ll try to put that right this weekend but we’ll see what happens.”

Miller is currently fourth in the championship, 16 points behind leader Fabio Quartararo, with practice beginning tonight (AEST) at Mugello.