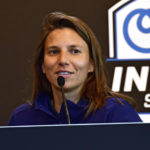 Simona De Silvestro opens up on how a Swiss kid came to fall in love with the Indianapolis 500, in her second Brick by Brick with Simona column, presented by Chevrolet.

My first memories of IndyCar were probably not what you would think for someone about to race in their sixth Indianapolis 500!

As a kid from Switzerland, a race 12 hours away by plane didn’t really have much importance for me to be honest.

What got me started was actually a computer game.

I remember being pretty small when my dad bought it for me – I think it was Laguna Seca or something.

He taught me to drive the tracks and I loved it. That was sort of the beginning I think.

I went to America in 2006 for Formula BMW and then Formula Atlantic.

I got to be part of the race only two years after that. I was 22, just wow. It’s funny, the older you get the more you kind of realise the importance of the race and how special it actually is compared to a lot of other races that you have been involved in.

So it doesn’t give you pressure but you appreciate it so much more when you get to come back and race here.

I’m so happy Beth called me in October, it was such a cool opportunity to come back to the Speedway here.

And IndyCar, that was always the place that made me as a driver, I would say.

It put me on the map and I have to be so grateful with what the series did for me.

It’s so good for Roger and everyone at Indy that we can have fans back this year even if it’s not as many people as usual.

Having more than 100,000 people going nuts on race day will give me and all the drivers a lift and it’s super special that IndyCar has been able to pull this together in times like this with COVID.

As you may already know, I will be starting the race (morning of May 31, AEST) in 33rd and last but we’re happy we made the field. It would have been so disappointing for everyone who worked so hard to get us here if we couldn’t qualify.

I really believe we can have a better run over the 200 laps and hopefully give my fans in Australia and everywhere else something to cheer about.

Thanks so much to everyone for all your support, we will try to do you proud!