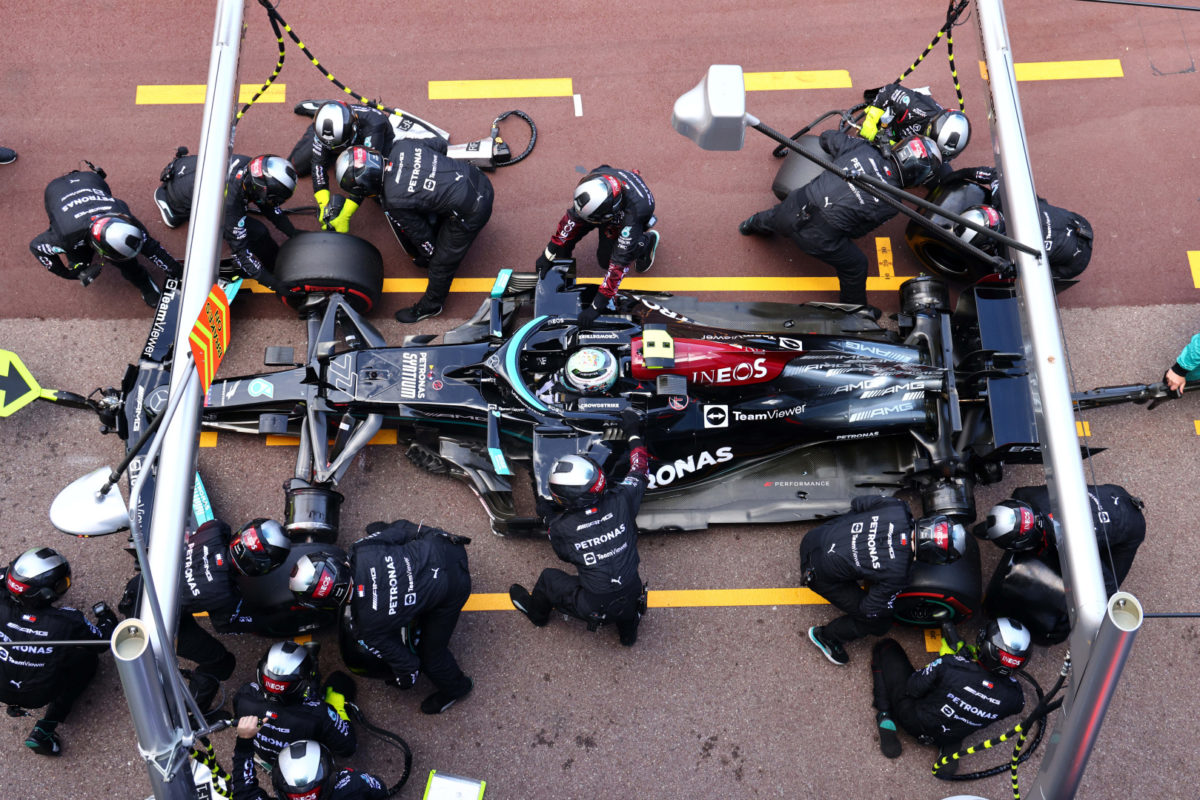 Of his two drivers, only Lewis Hamilton saw the flag and even he could do no better than seventh.

Valtteri Bottas had run second in the early stages before a problem in the pits forced him into retirement.

With Red Bull’s Max Verstappen taking victory, Mercedes now trails in the constructors’ title fight, while the Dutchman has taken over at the head of the drivers’ championship for the first time in his career.

“Seeing Charles [Leclerc], that was a disaster day for him and it wasn’t any better for us either,” Wolff said, referencing the pole-sitter’s failure to start the race.

“We lacked the pace all weekend, it’s as simple as that.

“The pitstop failure that we had is something that we need to understand because we completely machined a wheel nut.”

Prior to his stop, Bottas had begun dropped back from Verstappen as he began struggling with degradation.

The Finn pitted on Lap 30, only for his front-right wheel to remain firmly fastened to the car, ending his day.

“Sitting in the car at the pit stop, I knew it was a slow one and I was calculating [Carlos] Sainz getting past, then [Lando] Norris, and when it got to 30 seconds, I couldn’t believe it,” Bottas said.

“It’s obviously hugely disappointing and we need to learn so it never happens again.

“Between lap 15 and 20, it was a good margin between Max and I but when Max started to lift his pace, I noticed my front left started to give up more than his and I lost some ground.

“There was a gap when I stopped and perhaps it would have been difficult to fight for the win, even though we would have fought hard, but second place should have been possible today.”

Qualifying only seventh, which became an effective sixth on the grid courtesy of Leclerc’s misfortune, Hamilton’s race also unravelled during the pit sequence.

Unable to find a way by Pierre Gasly in the opening exchanges, Mercedes boxed the seven-time champion in the hope of undercutting the Frenchman.

Warm-up issues on his next tyre set, prompt reactions from AlphaTauri, and a solid Gasly in-lap ensured that wasn’t possible.

Further frustrating Hamilton was the fact Sebastian Vettel was able to overcut both he and Gasly to steal fifth, Red Bull pulling the same trick with Sergio Perez to demote the trio another spot.

“This has definitely been a poor weekend overall in terms of our performance, but this team has shown time and time again, how we come back fighting,” Hamilton said.

“There’s no reason why we should be performing like this on any weekend with all the experience we have together as a team.

“We’ll have some good discussions internally, it’s painful to learn these lessons but we’ve done it many times before.”

Wolff explained Hamilton’s misfortunes as a simple lack of speed when it mattered.

“With Lewis, we just didn’t have the pace in the car – it’s as simple as that,” he said.

“The undercut looked like the only feasible way of clearing Gasly and there wasn’t any mistake, the outlap was good, the pit stop was okay but it just wasn’t enough.”

A second stop late in the race saw Hamilton have a set of soft compound tyres bolted on, claiming fastest lap, and the bonus point, as a consequence.

It means he trails Verstappen by just four points instead of five in the world championship, while Mercedes now trails Red Bull by a single point.

The Azerbaijan Grand Prix is next, Round 6 of the F1 season taking place on June 4-6.