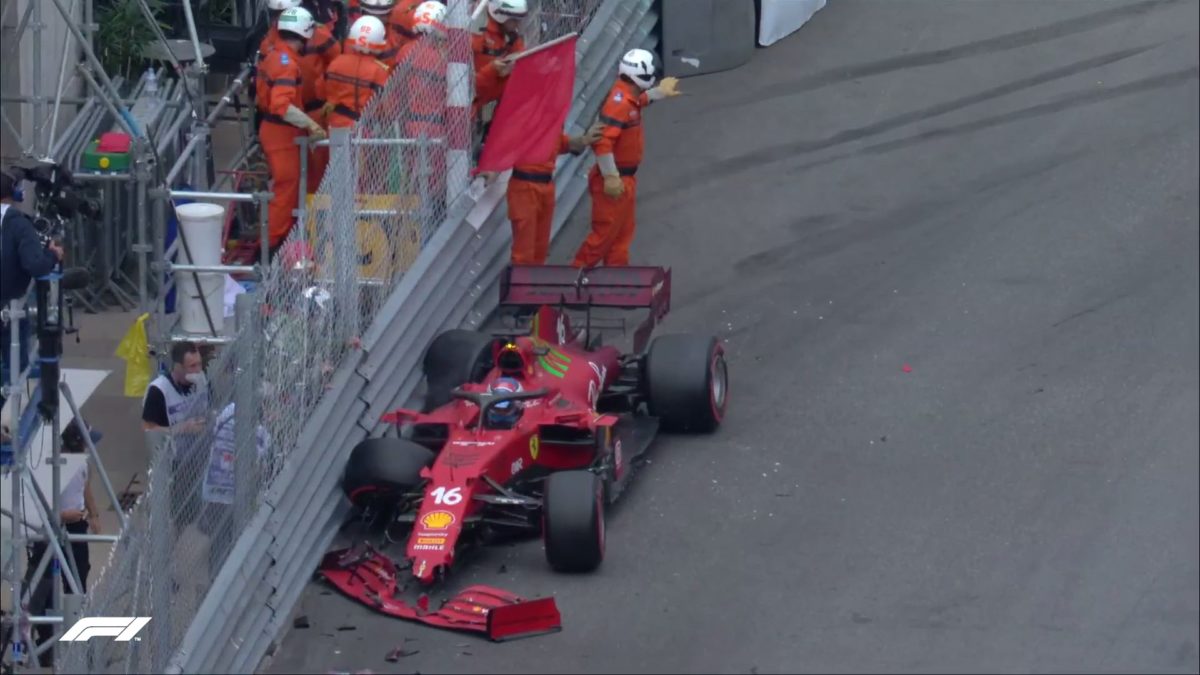 Charles Leclerc is concerned the damage his Ferrari suffered during qualifying for the Formula 1 Monaco Grand Prix may see him relegated from pole position.

Fastest as the session approached its finale, Leclerc nudged the barrier exiting the Swimming Pool, breaking the front right steering and sending him careering into the barrier.

The incident saw officials throw the red flag with just 18 seconds left on the clock. Without enough time to restart the session, it confirmed Leclerc on pole.

However, the 23-year-old now faces a nervous wait as his team assess the damage to his car.

Should it require significant work, most notably a new gearbox, the Monegasque driver could lose pole position for his home race.

“I have mixed feelings a little bit because, with the crash, I don’t know where I’m starting tomorrow yet,” he admitted.

“I really hope that the car is not damaged enough that we won’t be starting from the back, but if it’s not the case, then of course, I’m incredibly happy with whatever happened before the crash.”

Leclerc’s qualifying performance highlighted a strong recovery after a gearbox issue on Thursday saw him miss the bulk of Free Practice 1.

He and team-mate Carlos Sainz have demonstrated strong pace throughout the weekend, with the Spaniard to line up fourth for Sunday’s race.

Heading into the weekend, McLaren’s Andreas Seidl tipped the Scuderia to perform well, noting its pace in the final sector in Barcelona.

The tight final complex at the Spanish venue is regarded as something of a form guide for Monaco, with Ferrari showing strong pace there two weeks ago.

“It is quite a big surprise,” Leclerc said of his pole position.

“Surely we were very competitive in sector three in Barcelona, but again, it’s quite different, they’re very different tracks.

“We were maybe expecting Red Bull and Mercedes to have something more for here, but apparently they didn’t and we were just very competitive from the start [of the weekend].

“It was good, but until quali we didn’t believe we could fight for pole, so it’s a surprise.”

The Dutchman had started his final flying lap as the Ferrari crashed out, and revealed he was on a better lap than the 1:10.576s he’d recorded earlier as the red flag was shown.

“I was 0.15s up before going into the tunnel, and I knew on the previous lap I made a mistake in Turn 11, where I lost more than a tenth,” Verstappen said.

“I knew pole position was on, especially on the second timed lap [because] I had a lot more grip on the tyre.

“So even the last sector normally would have been an improvement, but would have; could have; should have; and I don’t really care about that.

“The fact is that there was a red flag.”

Valtteri Bottas, who will start third, was in a similar position; showing an improved time on his final effort before the session was halted.

Should Leclerc hold on to pole position his hopes are high of maintaining top spot throughout tomorrow’s race.

“If I get my pole position, I will probably not be very happy to finish second,” the Ferrari driver said.

“In Monaco, we actually have quite a lot of chances [of converting pole into victory],” he added.

“If we have a reasonable pace as we’ve had all weekend, then I’m pretty sure it’s possible.”

The Monaco Grand Prix gets underway at 23:00 AEST this evening.