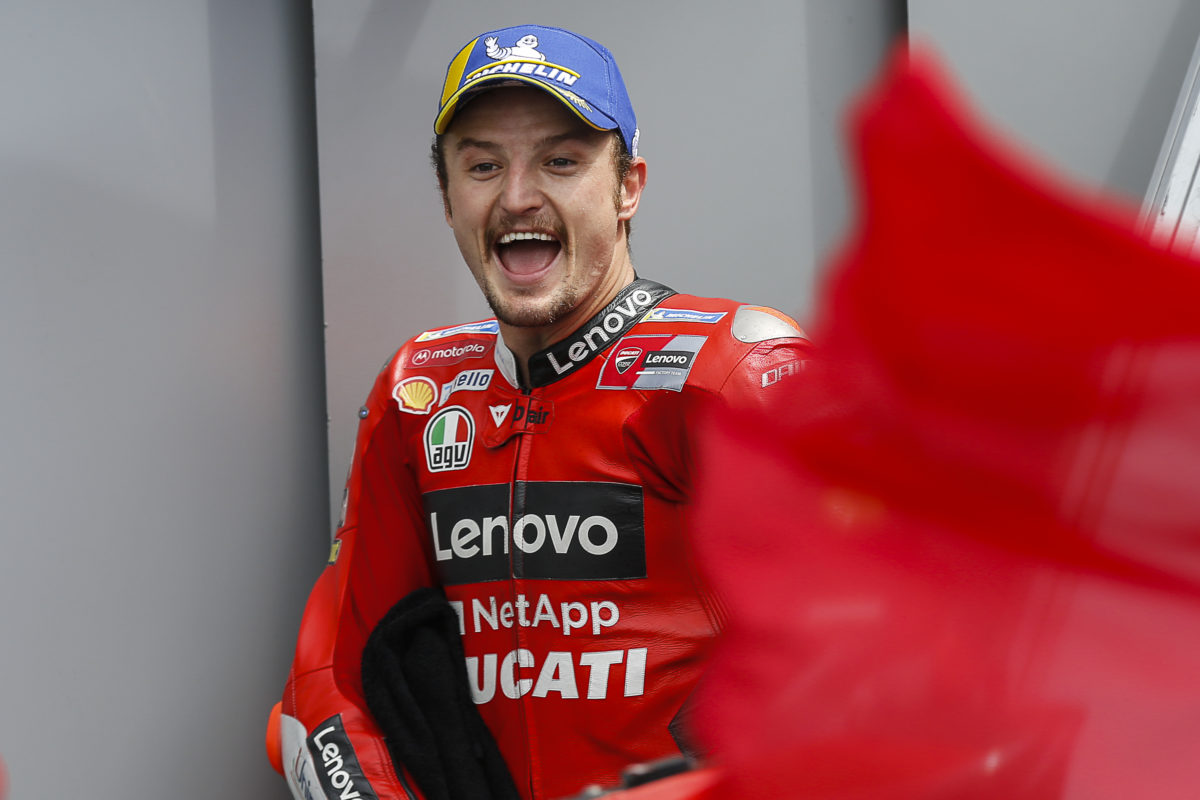 Jorge Lorenzo believes that Jack Miller must be riding a wave of confidence after consecutive MotoGP victories.

Miller took out the 2016 Dutch TT but had to wait almost five years to double his tally, in the Spanish Grand Prix, and backed that up with another win, at the French Grand Prix.

The results represent a major turnaround compared to the ninth, ninth, and DNF with which he started his tenure at the Ducati Lenovo Team and left him fighting “in the trenches”.

According Lorenzo, Miller would have been able to perform even better at Le Mans given his win a fortnight earlier at Jerez.

“It was five years since Miller had achieved a victory in Jerez and as soon as he achieved that, he goes and gets another consecutively at Le Mans,” observed the three-time premier class champion in his 99 Seconds show.

“The confidence and security that a victory gives to any rider is incredible; it makes you believe in yourself a bit more, ride with confidence, and perform better in general.

“That’s what happened with Jack.”

Lorenzo declared that the Queenslander’s Jerez win was “good … but not great” given he was handed the lead when Fabio Quartararo suffered arm pump while seemingly on his way to a comfortable victory.

Le Mans was far from straightforward for anyone, however.

Miller was thrice compromised as a result of changing weather and the consequent flag-to-flag declaration, first when he ran through the gravel on his in-lap and then with the two long lap penalties he had to serve for speeding in pit lane.

He once again passed Quartararo for first position, four laps after Marc Marquez dropped his Honda while heading the field.

Lorenzo declared Miller a ‘specialist’ in such conditions.

“He returned to the front row again, he came out first [led initially], he was overtaken by Viñales but he was there when an opportunity presented itself,” said the Spaniard.

“This time it wasn’t Quartararo’s forearm problem, but the so-called flag-to-flag where he is a specialist and moves in his element, because Jack was there to take advantage of it.

“When Jack went off the track, [he] was in third position with Marc in front of him.

“Marc, who is one of the specialists in those conditions, made a mistake and fell down, [and] he left the next specialist free, which is Jack, to ride calmly.

“And little by little, he recovered ground from Quartararo that, in the wet asphalt due to the characteristics of the Yamaha, is not a strong and dangerous as in dry conditions.

“For Jack, it was relatively simple to have patience, overcome him and achieve a higher pace.

“It has been a long time, almost 10 years, since an Australian has achieved a double victory consecutively – since Casey Stoner – and that has an important merit.

“So, congratulations Jack, enjoy the victory as I saw you do with your celebrations. It’s your moment now.”

Miller is now fourth in the championship, 16 points off the pace set by Quartararo, ahead of Round 6 at Mugello on May 28-30.