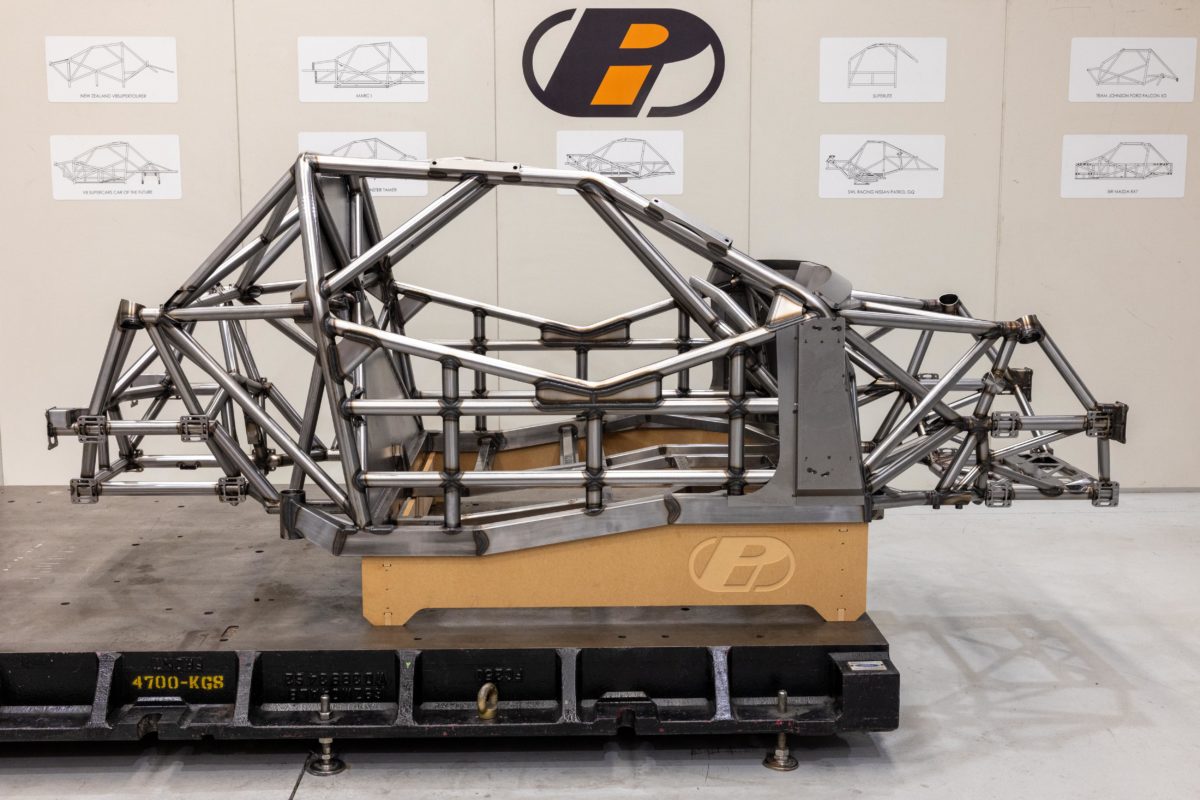 Images of the second prototype Gen3 Supercar chassis, built by PACE Innovations, have been released.

The unveiling follows that of the Triple Eight Race Engineering-constructed chassis, which broke cover just over a month ago.

PACE, which designed the Car of the Future chassis and supplies a number of teams, unveiled the Gen3 chassis today at its Yatala workshop.

While it is not yet painted, the imagery distributed to media shows the front and rear sections.

Supercars CEO Sean Seamer has advised that the chassis will soon be dispatched to Ford homologation team Dick Johnson Racing, which is based near PACE, for further development.

“We’re very pleased that the second chassis is now completed and ready to begin the next phase of development with the Ford homologation team,” said Seamer.

“I’d like to thank the crew who have put in thousands of hours to reach this point, particularly the staff at PACE who have a history of international success.” An alternate angle of the chassis

Supercars Head of Motorsport Adrian Burgess drew attention to the enhanced repairability of the Gen3 chassis relative to its COTF predecessor.

“We’re proud of the work that has gone into the design and styling of the Gen3 cars; they look fantastic,” said Burgess.

“We’re also very satisfied with the developments we have made in regard to safety and repairability, which was a key objective of the programme.”

According to Supercars’ release, “PACE will supply completed chassis to the bulk of the field”.

“PACE Innovations has been the chassis supplier to the Shell V-Power Racing Team since 2012 and together we have won three drivers’ and three teams’ championships since that time,” noted Story.

“They are an excellent partner with enormous experience and expertise; a perfect fit as we reach this important milestone being the completion of the prototype Gen3 Supercar chassis for the Ford Mustang GT.”

The release of images of the PACE chassis comes just over a week after Supercars convened a crisis meeting with all 11 team owners regarding Gen3.

While the ruleset is due to take effect next year, the project appears to be significantly behind schedule.

There is still no confirmed date as to when prototypes will hit a race track, despite Seamer advising selected media, including Speedcafe.com, in February that such an activity would occur “in the middle of the year”.

Supercars released a brief statement on the afternoon of Tuesday, May 11, the day of the aforementioned meeting, which did not strictly rule out the possibility of a mid-year Gen3 introduction, or even a delay to 2023.

“The outcome of the session was to continue working towards a 2022 implementation and we will continue regular reviews in the coming months,” read the second and final line of that communication.

The 2021 season continues in just over a weeks’ time with the Winton SuperSprint, for which track activity commences on Friday before practice for the Supercars Championship field takes place on the Saturday morning.