Speedcafe.com has partnered with the Australian Institute of Motorsport Safety (AIMSS) in an attempt to find the next big breakthrough in motorsport safety.

Taking place virtually on June 1, the AIMSS Motorsport Safety Summit will feature the Speedcafe.com Pitch My Project concept among a number of other segments.

Pitch My Project is a major component of the summit, providing a platform for safety concepts and projects to get off the ground.

Those pitching their ideas will do so to a panel of global experts, while the summit will also feature addresses from Mark Webber, Fernando Alonso and Romain Grosjean.

Applications are now open for Pitch My Project before entries close on May 28 and will be narrowed down to four individuals or groups to present to the panel.

Participants will receive constructive feedback on their idea and a winning project will be awarded the Speedcafe.com Pitch My Project trophy.

The winner also stands the chance of having their idea developed and supported by AIMSS.

AIMSS chairman and Formula 1 steward Garry Connelly encouraged anyone with an idea to enter.

“A lot of motorsport’s current safety initiatives came about because someone had a bright idea and we know there’s lots of brilliant people in and around the world of motorsport,” Connelly told Speedcafe.com.

“What we are looking for is as many people as possible to put forward ideas that might lead to us doing some research or product development work on a motorsport safety initiative that could either save money or assist in the process of saving lives.

“It’s for people that have an idea to improve motorsport safety and giving them a forum to present it to a judging panel of four people that will pick the winning project.

“Then we will see if we can offer some ongoing support and help and maybe even find some sponsorship for that particular project.” 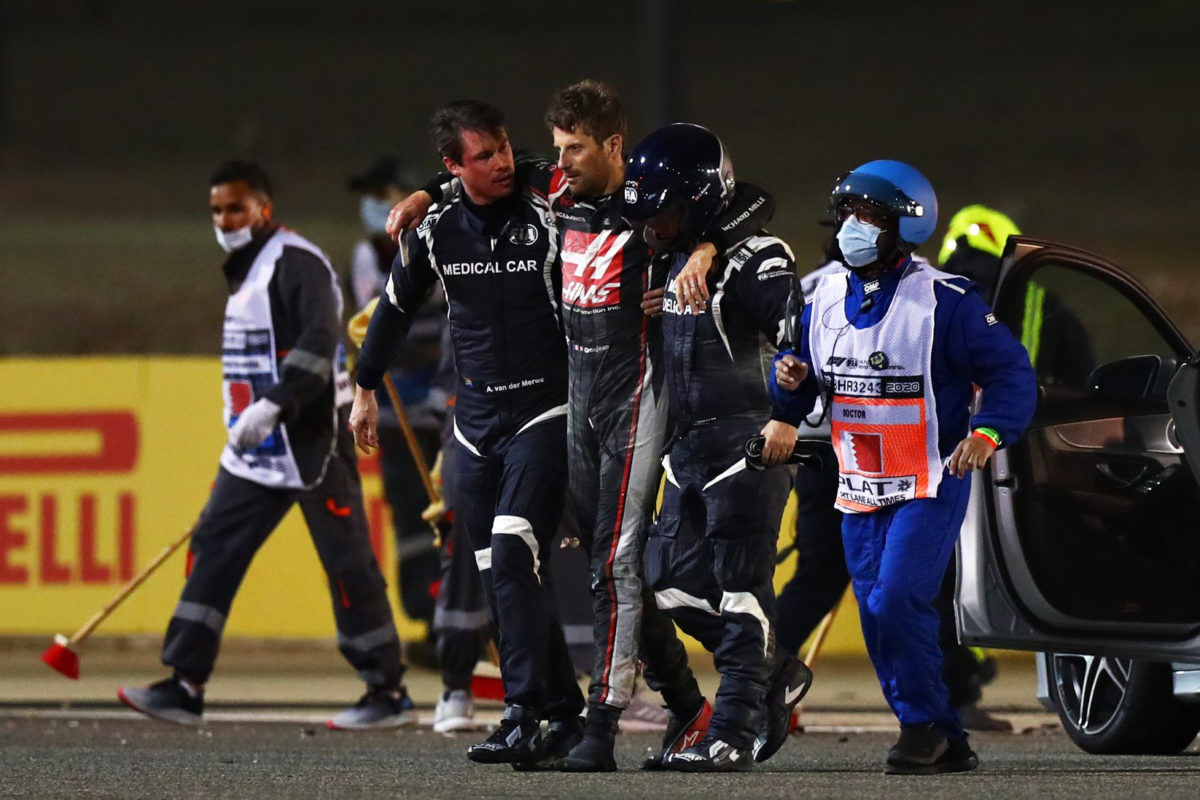 Romain Grosjean is helped by F1 medical crews in Bahrain

Connelly gave examples of current priority areas in motorsport safety and a general scope for projects.

“If you narrow it down there really are only three areas of safety involved in motorsport,” he added.

“One is the safety of the competition course; so if it’s a race circuit event then it’s going to be the track, so track safety items.

“Everything from track limits to debris fencing, things like the Tecpro barriers instead of tyre barriers, maybe there’s another alternative to that, a cheaper version.

“If it’s a rally event, for example, we’re desperately trying to find a solution to the end barriers or armco fencing when you’re running a stage rally in the opposite direction to what the traffic is intended to go.

“The ends of the armco fencing are traditionally left unprotected by the authorities that put the fences there; if someone could come up with a simple solution for that, there’s a good project. That’s one area.

“The second area is the safety of the vehicles, so that’s everything from fuel tanks, roll cages, steering columns, safety nets, harnesses and so on.

“Is there some technology for the car that would warn competitors of an impending danger in a rally?

“Then you get down to the personal apparel of the driver; are there new standards required for gloves? Things like racing boots or other driver protection items.”

In the lead up to the summit Speedcafe.com will highlight some key moments in motorsport safety over the years.

CLICK HERE to submit an application for Speedcafe.com Pitch My Project.