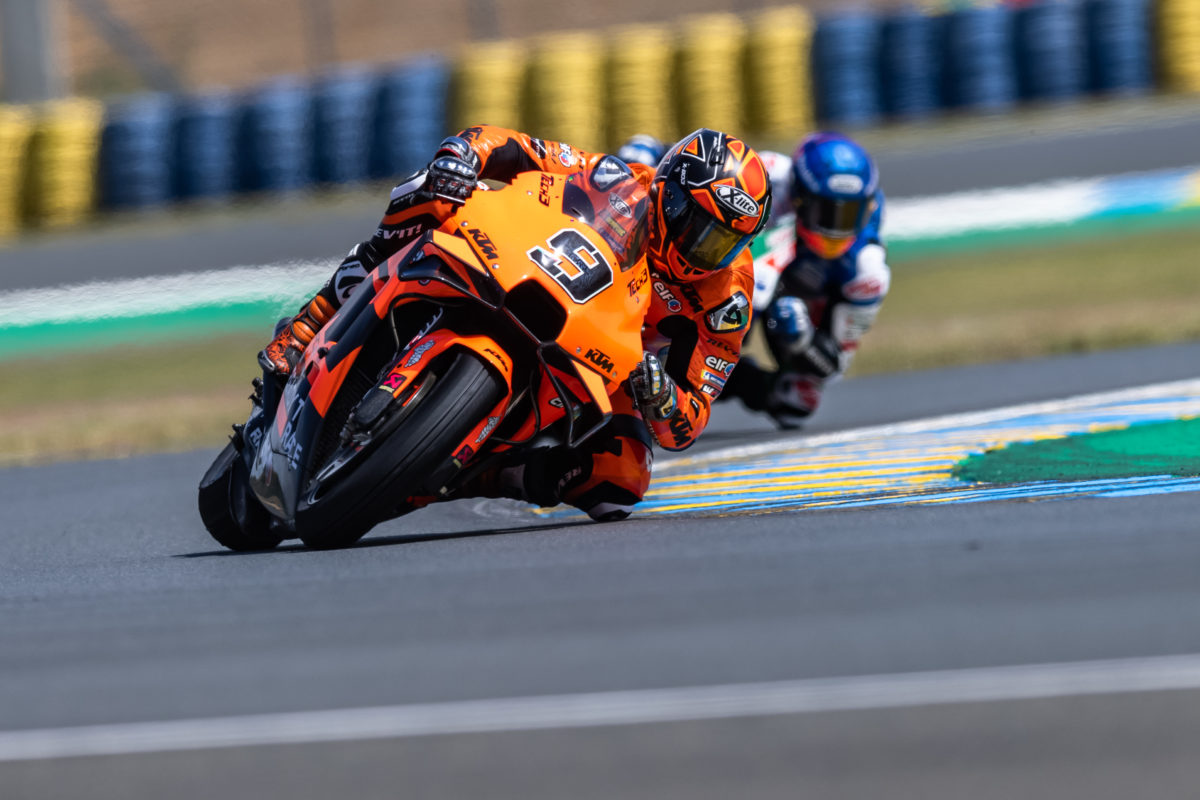 Danilo Petrucci was happy to reward KTM and his Tech3 squad with his best MotoGP result of the season to date, at Le Mans.

Petrucci, who moved from the Ducati Team in the last off-season, finished fifth in the French Grand Prix, equalling KTM’s best result of 2021 so far.

The Italian is one of the bigger riders in MotoGP and the RC16 is not yet to his liking, while the Austrian marque is adjusting to life as a non-concession manufacturer after grabbing three wins last year.

With wet-dry conditions nullifying some of the issues which Petrucci is currently facing, he was pleased to deliver an encouraging result on Tech3’s home soil.

“I really wanted to make a good result here because it’s one of my favourite places and it’s also my team’s home race,” said the 30-year-old.

“I can see that I could [have] be[en] on the podium but I’m very happy for the team.

“We are working hard, we are for sure in a difficult situation technically, but all the team is working very, very hard to solve this problem.

“The next race is Mugello; I won the last time we went there [2019 Italian Grand Prix]. It will be very difficult this year [because of] the [long main] straight but I think I have good memories and good skills in Mugello.”

Petrucci went from last on combined Friday practice times at Le Mans to the top of the timesheet in the Warm Up.

He had climbed from 17th on the grid to sixth on his way into the pits when the whole field swapped bikes at the end of Lap 5, as rain began to pour.

An error soon dropped the two-time MotoGP race winner back to 12th but he hauled his way back to fifth by the end of Lap 20.

Petrucci felt that a podium was in sight had the rain kept falling until the end of the 27-lap contest.

“I think I am one of the only riders that really likes to ride here under the rain,” he suggested.

“In the warm up, to be the fastest rider has been good.

“The race was very, very difficult; very easy to make mistakes. I did just a mistake when I took the bike with the wet tyres, I went wide a bit because I lost the front and it was like riding on ice.

“Then, at the end, I managed to do a good race. Unfortunately, the track got dry so quickly, so for a moment I thought [I would] finish on the podium for the fourth year in a row here in Le Mans.

“But, on the other hand, I’m really happy about this result; to be the best KTM, for us, is a good result.”

Petrucci sits 16th in the championship ahead of the Italian Grand Prix, on May 28-30.