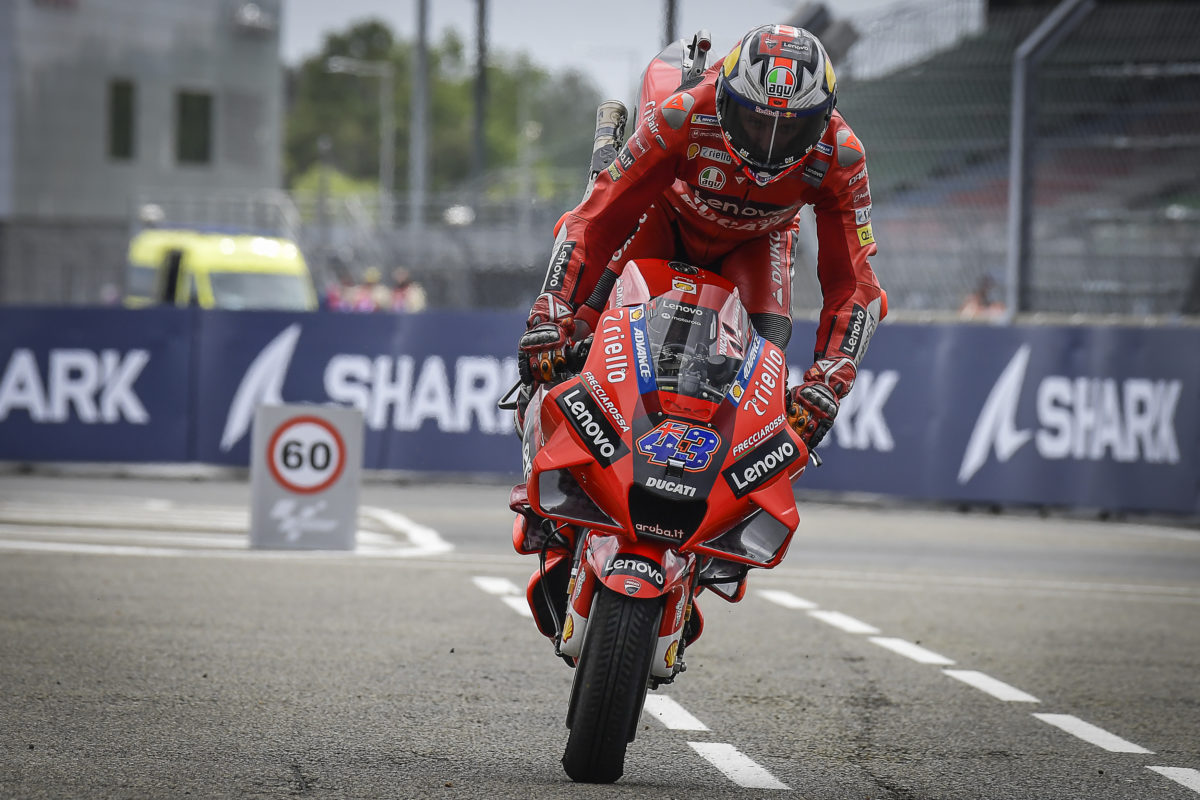 Jack Miller celebrates with a ‘stoppie’ at Le Mans

Jack Miller has suddenly become the form man in MotoGP and, with that, we ask if you think he will win the 2021 championship, in this week’s Pirtek Poll.

Miller has gone from being “in the trenches” after a shocking start to the season, namely a pair of ninths and a DNF, to consecutive victories, at Jerez and Le Mans.

In doing so he has jumped from a low of 12th in the championship two rounds ago to fourth, 16 points (the equivalent of one, third place finish) behind leader Fabio Quartararo.

It was Quartararo who the Ducati Lenovo Team rider overhauled in challenging conditions despite having to take two long laps during the French Grand Prix, after surviving an off on his in lap before changing bikes.

A fortnight earlier, Miller passed the same rider for the lead when Quartararo suffered arm pump midway through the Spanish Grand Prix.

It is true that the Queenslander should not have been able to beat the #20 Yamaha if its pilot was fully fit for the duration of that race, as a typically frank Jorge Lorenzo observed.

However, it is also true that Miller managed to give up only 1.5s to Quartararo and his M1 by the halfway mark, when the arm pump issue manifested itself, around a Jerez circuit which should not suit a Desmosedici.

Clearly, ‘Jackass’ rode well, Ducati has made its bike turn better, or some combination of both was at play.

Miller was also the fastest in wet conditions at Le Mans, although not without his errors, namely the off-track excursion and the pit lane speeding which drew the long lap penalties.

Lorenzo, in the above mentioned critique, opined that the 26-year-old is still not clinical enough and/or not consistent enough, although whether the mishaps in France are serious concerns is up for debate, given the circumstances.

What is apparent is that the Ducati is one of the better bikes on the grid, perhaps the very best.

Ducati stablemates Francesco Bagnaia and Johann Zarco have led the championship during the first five rounds despite neither having yet won a race in the premier class, suggesting Miller might have the machinery he needs to claim the title.

By the same logic, however, that also makes Bagnaia, in particular, and Zarco, who is domiciled at Pramac Racing but enjoys current-spec bikes, genuine threats.

Quartararo obviously cannot be discounted, although whether Monster Energy Yamaha can be strong enough over a whole campaign is questionable in light of recent history.

Beyond the aforementioned top four in the standings, Suzuki’s Joan Mir, the 2020 champion, should not be overlooked either, given how he snuck up on the title last year.

The Spaniard sits sixth at 31 points back from Quartararo but there are still 14 rounds to come based on the calendar as it stands.

Honda’s Marc Marquez is 17th, 64 points off the pace, and while he led during the French Grand Prix, the six-time premier class champion is still far from his best.

Will Miller be too good for all of them and win the 2021 MotoGP championship? Cast your vote in this week’s Pirtek Poll.