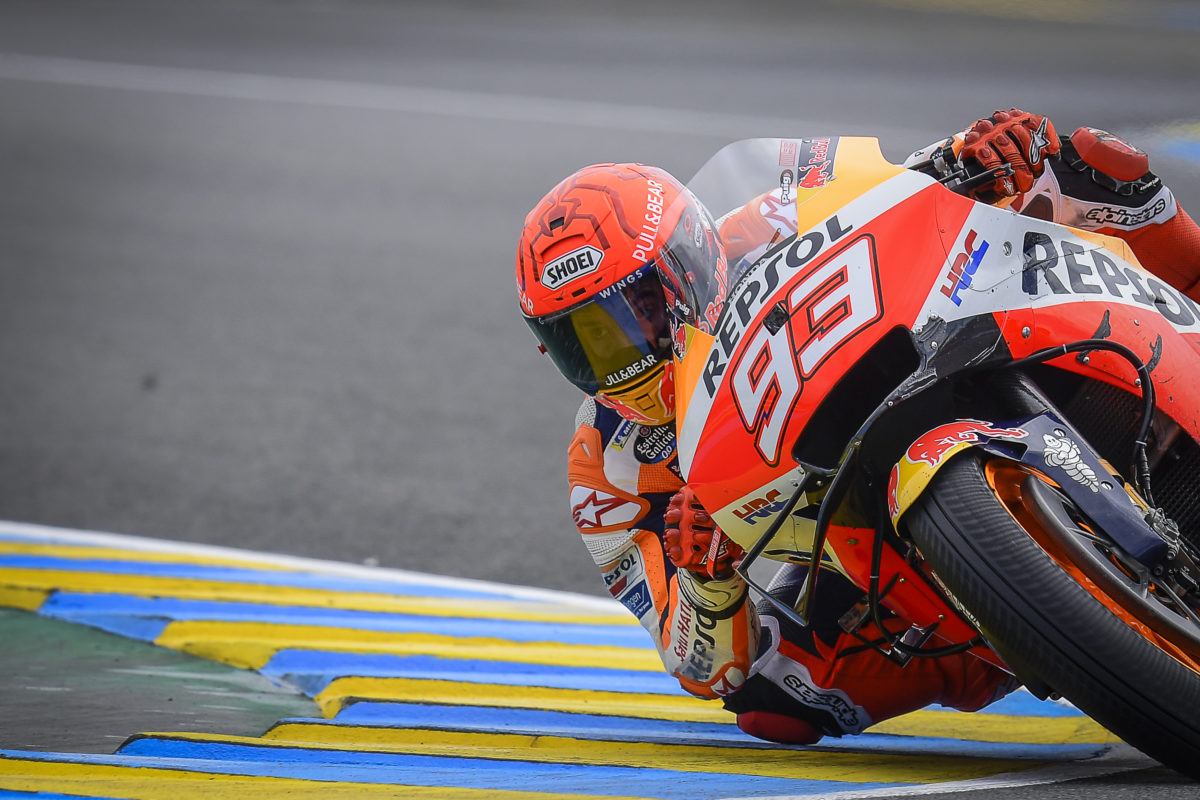 Marc Marquez is disappointed at a missed opportunity after crashing while leading the French Grand Prix, just three races into his comeback.

The six-time premier class champion led a MotoGP race for the first time since last year’s fateful Spanish Grand Prix when he was first out of the pits to commence Lap 6 as rain fell at Le Mans.

Marquez got out to two seconds clear of Fabio Quartararo before he crashed at Raccordement on Lap 8.

He remounted his Repsol Honda and had climbed to 11th before another spill, at La Chappelle, on Lap 18 saw him finally retire from the contest.

It was the latter crash that particularly upset the 28-year-old given he felt it ‘unnecessary’.

“Obviously today we didn’t take the opportunity that the weather gave to us and I’m disappointed about this,” said Marquez.

“I knew if I was patient in the first three to four laps, then it would be a good race for me.

“But anyway, I crashed when I didn’t expect, obviously. I was not pushing a lot but anyway it was like this.

“It was quite difficult to get temperature in the rear tyre, especially on entry to the corners, off the gas and brakes, just I missed the rear where I didn’t expect. This first crash can happen and many riders crashed today.

“The good thing was that I got back on the bike and I was the fastest guy on the track, but I’m angry with myself because the second crash was not necessary.

“This was my fault and I was not able to control myself. I was not full concentrated, I was riding fast, maybe too fast. I didn’t know that the front riders were riding slower than me after the first crash.

“Just I was thinking about the arm and about other things, because on that lap I just informed my team that I was going into the box to change to slicks because the track was ready, I believe.

“Anyway, for that reason I’m disappointed with the second crash.”

Marquez is still building back to full fitness after almost nine months off a motorcycle due to the broken arm, and was mostly encouraged by his latest performance.

“The good thing is that this weekend we showed, in damp conditions, when I don’t have the limitation of the physical condition, the speed is there,” he explained.

“It’s true that I did a mistake but it’s part of the comeback. Today I felt the opportunity, I tried to be there but maybe I pushed too much and I was too fast.

“Checking now the pace of all the riders, riding much slower the race was there.

“But we didn’t use the opportunity that the weather brought me.

“Now it’s time to go home, analyse this weekend, try to continue with the recovery and let’s wait for the next races to feel better.”

Marquez is now 17th in the championship, 64 points behind leader Quartararo, ahead of Round 6 at Mugello on May 28-30.