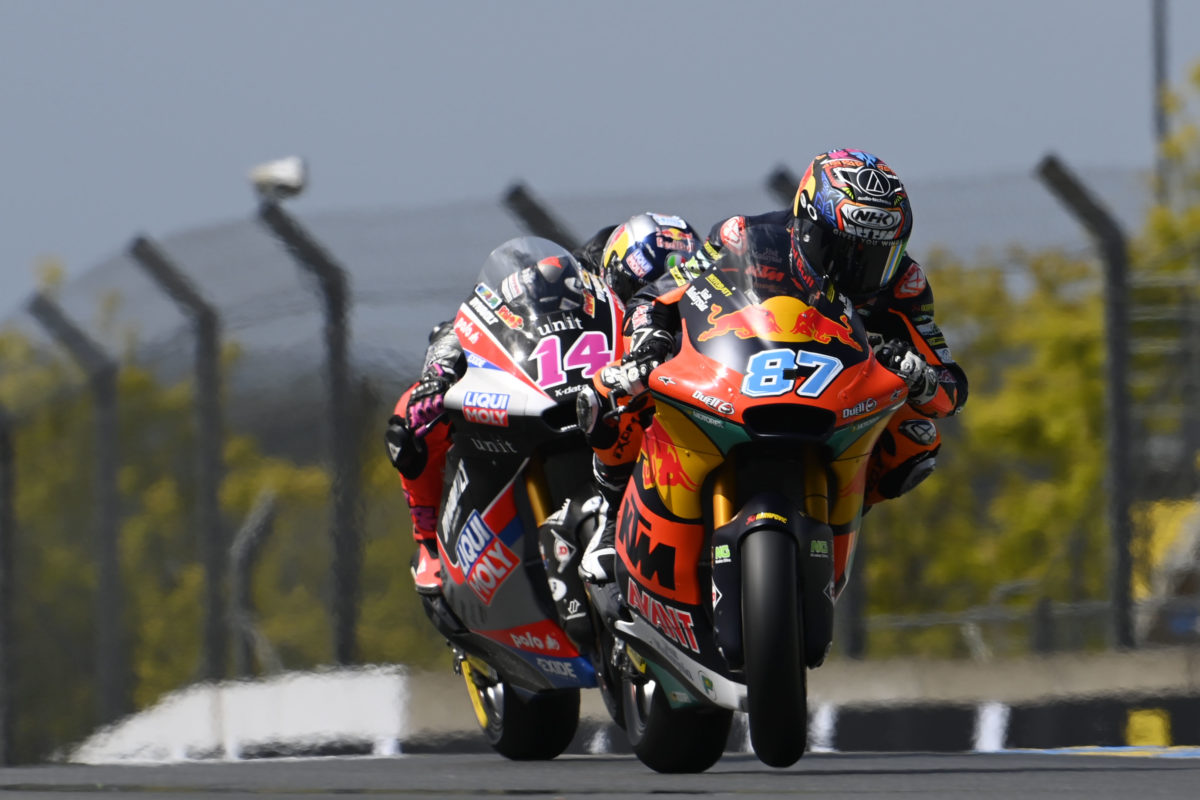 Gardner qualified seventh at Le Mans and dropped spots as he was involved in contact on Lap 1 but the runner-up finish means he still leads Fernandez in the championship, by a single point.

Fernandez put Bike #25 on pole but it was Marco Bezzecchi (Sky Racing Team VR46) who led the field away on a track declared dry.

Aron Canet (Inde Aspar Team) crashed out of third at Chemin aux Boeufs, giving that spot back to Joe Roberts (Italtrans), while Gardner was ninth at the end of the standing lap after a touch with Xavi Vierge (Petronas Sprinta) through the opening corners.

Roberts got by Fernandez on Lap 4 of 25 but he too went down at Chemin aux Boeufs, a lap later, which contributed to Gardner’s rapid progress.

The Sydney native had just gained three spots when early-season championship leader Sam Lowes folded the front of his Elf Marc VDS entry and wiped out Vierge at Garage Vert as Lorenzo Baldassarri (MV August Forward) simultaneously ran wide on his own.

He was fifth when Hector Garzo (Flexbox HP40) ran wide at the start of Lap 5, and fourth once Roberts had that spill. Fernandez, however, also got past Bezzecchi on Lap 5, at Garage Bleu, to take the lead.

The rookie’s advantage was one second at the end of Lap 8 as Gardner tailed third placed Bo Bendsneyder (Pertamina Mandalika SAG).

The man on #87 passed Bendsneyder into Garage Bleu on Lap 16, at which point Bezzecchi was a second up the road.

Gardner was closing the gap when he received a gift in the form of the Italian running wide at Garage Vert on Lap 19.

The 23-year-old rider pulled four tenths out of Fernandez’s near two-second margin on Lap 20 but the rookie responded and ultimately took his second Moto2 win by 1.490s.

“I am very happy with the race we had,” said Gardner.

“Our position on the grid reduced our chances of being able to fight for the victory. Even so, I am satisfied with the work we did, since at the end of the contest we were able to get closer to Raul.

“This is important for me, as we also took a good amount of points. I’m already looking forward to the next round, and to continue working together with the team. Finally, I want to congratulate my team-mate on his win.”

Behind the Red Bull KTM Ajo duo at the chequered flag was Bezzecchi, from Tony Arbolino (Liqui-Moly Intact) and Bendsneyder. In Moto3, GasGas got its first ever win after Sergio Garcia prevailed following a battle with Filip Salac for much of the race.

Red Bull KTM Ajo’s Pedro Acosta still leads the lightweight class championship despite crashing on his way to a finish of eighth.