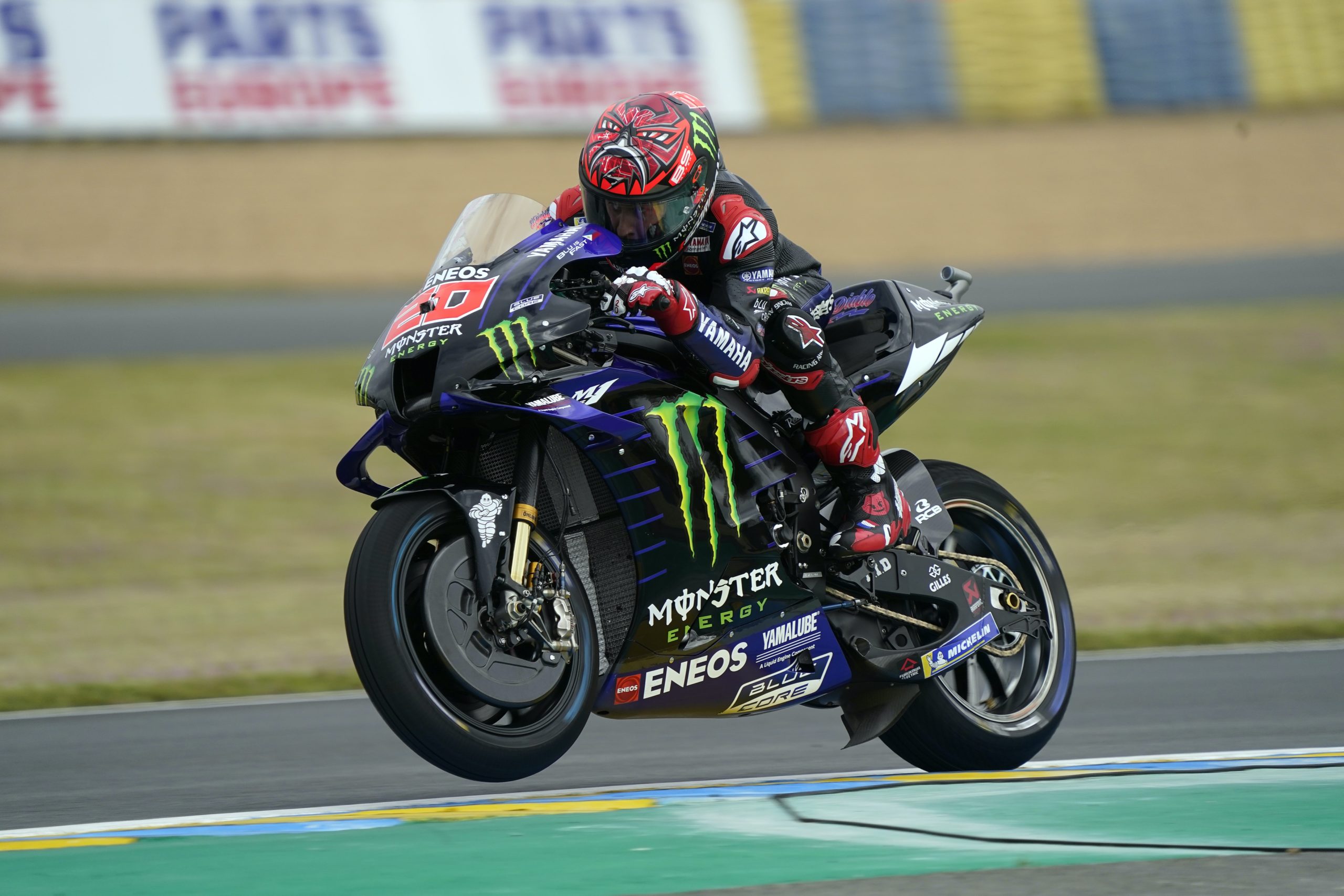 A frenetic end to qualifying saw the Frenchman end hopes of an all-Honda front row, which had been locked out by Marc Marquez, Takaaki Nakagami, and Pol Espargaro.

A 1:32.600s on the Bugatti Circuit was enough for the Yamaha rider to edge out team-mate Maverick Viñales by a mere 0.081s.

The opening leg of qualifying saw a handful of big-name riders fighting to find their way out of Q1 and into Q2.

Among those was factory Ducati rider Francesco Bagnaia as well as Suzuki duo Joan Mir and Alex Rins.

Riders were greeted by wet conditions, though the Bugatti Circuit dried in parts as the session wore on.

As the chequered flag flew, Espargaro and Lorenzo Savadori made it an Aprillia one-two, though it was short-lived.

Mir snuck into the top two, but only seconds later Savadori and Luca Marini (Sky VR46 Esponsorama) blitzed across the line on a 1:42.550s and 1:43.352s respectively to go through to Q2.

The Suzukis of Mirs and Rins locked themselves into 14th and 15th on the grid while Bagnaiana was 16th.

Yamaha SRT rider Valentino sought to make an inspired choice by going onto slick tyres at the start Q2, but nearly suffered a high side while 1.2s to the good.

Rossi rode through the gravel trap, while Miller on wet tyres set a blistering 1:35.472, three seconds clear of his nearest rival.

Franco Morbidelli (Yamaha SRT) shot to second place, albeit half a second off, as rain threatened once more.

Third was Pol Espargaro (Honda) while Quartararo and Savadori rounded out the top five.

Miller soon extended his advantage by a second, setting a 1:34.374s, though he was bested by satellite Ducati rider Johann Zarco on a 1:34.211s with five minutes to go.

With little more than a minute to go, it looked unlikely that the Honda riders would be demoted as those around them failed to improve and rain fell at Turn 1.

No sooner had the rain arrived and the sun was out. As the bikes crossed the line for one more lap, Viñales, Zarco, Quartararo, and Miller all improved.

Viñales shot to the top on a 1:32.681s, but that was bettered by team-mate Quartararo with a 1:32.600s while Miller slotted into third just a tenth adrift.

Morbidelli was fourth while Zarco and Marquez were fourth and fifth respectively, setting up the second row.

The French Grand Prix gets underway tonight at 22:00 AEST.