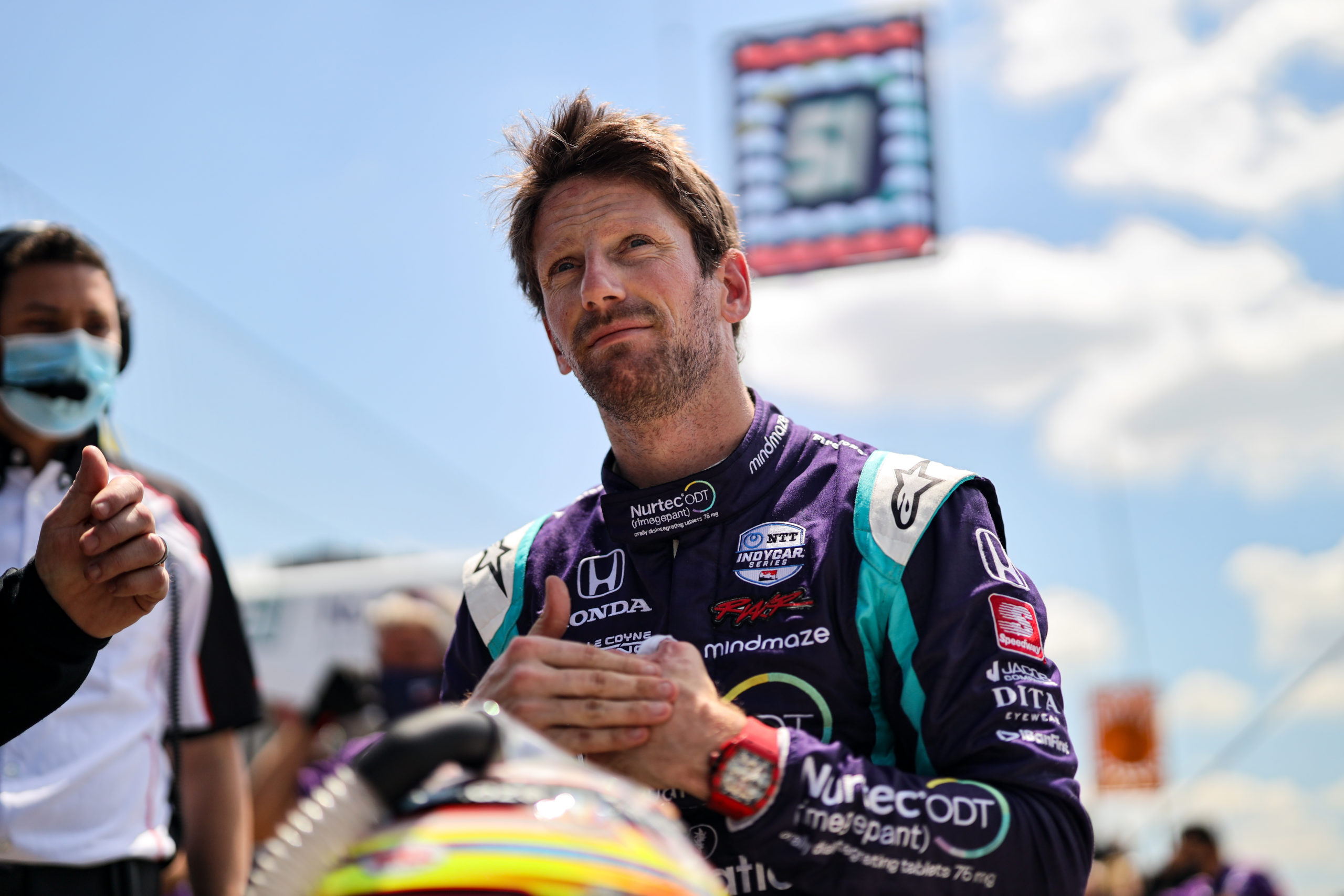 It marked the first time in 10 years that the Frenchman started a race from pole, his last coming in the GP2 Series in 2011 (now FIA Formula 2 Championship).

The 35-year-old was dominant early on in the 85-lap affair, stretching his advantage out over Jack Harvey in the early proceedings.

Seventh place starter, and eventual winner, Rinus VeeKay was on a tear of his own as he charged through from seventh to second shortly before the midway point.

Prior to the second round of pit stops, VeeKay sat some 10 seconds in arrears of Grosjean.

While VeeKay pitted early and got onto the soft compound tyres, Grosjean sought to scythe his way through traffic.

However, the race leader would face stiff opposition from the likes of Juan Pablo Montoya and Takuma Sato, describing the defence from traffic, particularly Sato, as “a bit on the limit”.

Ultimately, VeeKay was able to bring that 10-second deficit down to nearly nil by the time Grosjean pitted.

Shod with hard compound tyres, Grosjean couldn’t hold off VeeKay, who breezed by at Turn 12 never to be challenged again.

Speaking after the race, Grosjean noted the absence of Blue Flags between IndyCar and Formula 1.

“Well, I think every series is different, and you’ve got blue flags issued everywhere,” Grosjean explained.

“In Formula 1 I was shown the blue flags quite a bit over the last few years and it was terrible for us. The leader complained that it wasn’t good enough.

“Here, today, obviously I wish it was on more often because I was the guy that was chasing them, but it’s the rule that IndyCar uses.

“Is there room for improvement? Probably. Is there a perfect solution? No. But definitely I think traffic cost us the win today.”

Asked what made the difference between winning and losing the race, Grosjean replied: “Blue flags. Honestly, that’s the only thing we could have done differently today.

“We can gain a couple of seconds on pit stops and so on, I still feel like we can improve a bit there, but today we were leading the pack by a good margin, meaning I was going to be the first one to hit traffic, and we hit it quite hard.

“Really having that was the only thing that I would have changed today, putting away cars that were lapped cars out of my way.”

Grosjean’s next outing in the IndyCar Series won’t be until the Detroit Grand Prix at the Belle Isle Street Circuit across June 12-13.

This year Grosjean is contesting a part-time campaign, missing oval races. The #51 will be piloted by Pietro Fittipaldi in this year’s Indianapolis 500.