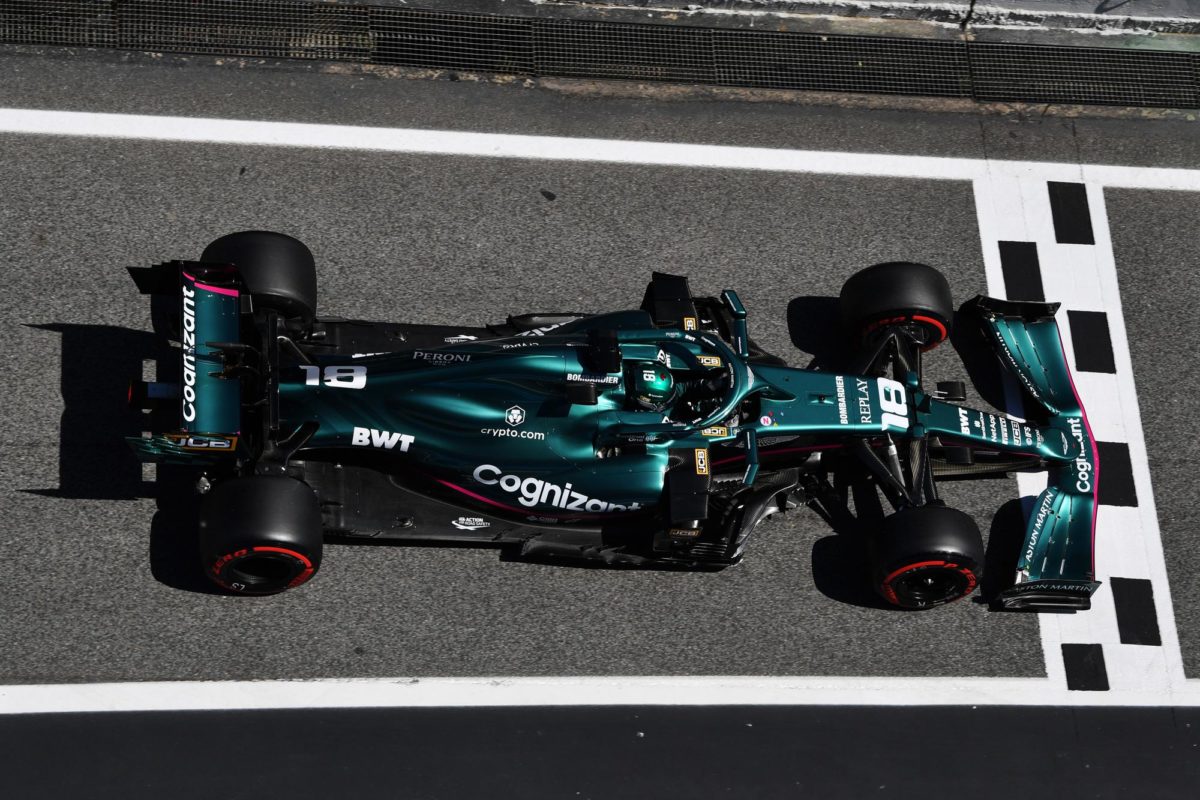 Aston Martin has a low-rake design

While the debate surrounding the way new aerodynamic rules were introduced into Formula 1 this season may have abated, Aston Martin remains frustrated.

The squad formerly known as Racing Point created something of a stir earlier in the season with suggestions it could take the FIA to court over the way the new rules were introduced.

That saw a triangular shape cut away in front of the rear wheels, changes to the strakes in the diffuser, and some changes around the bargeboard area.

It was all done with the intent of slowing cars down, ostensibly to protect Pirelli’s tyres.

When the change was made it was thought that last year’s tyres wouldn’t be carried into this season.

Since development in F1 doesn’t stand still, concerns were raised that the forces exerted on the tyres would simply be too great.

Further to that, there were concerns that the cars had got too fast for some circuits.

In short, the changes were made to slow the cars down.

But while Aston Martin accepts the cars needed to be slowed down, team boss Otmar Szafnauer has questioned the process which has seen these specific changes made to the rules.

His ruminations centres on the fact cars which a high rake design approach appear to be less impacted by the loss of downforce.

Aston Martin operates a low rake philosophy, as the 2019 championship winning Mercedes upon which it is based did.

“We developed a high rake car for many, many years, since the high rake concept started with the blown floor and we were one of the only ones, actually the only one, to change from a high rake philosophy to a low rake,” Szafnauer responded when asked how he knew his team had been disadvantaged.

“So we’ve got the ability internally, through both CFD and doing tunnel runs, as well as having the experience of both, to have a look at the changes and to be able to determine if it is more detrimental to one philosophy than the other, which is exactly what we brought up in August of last year and we were, I think, proven correct.

“If you just look at the [Portuguese] race, without the pit stops for Mercedes, for example, I think Lewis was 34 seconds ahead of Max at last year’s Portimão and had they not had the pit stops at the end to try to get the fastest lap I think this year it was four seconds in it.

“So they lost 30 seconds in one race to a Red Bull.

“If you look at our times, where we finished, we too were about 30 seconds behind from where we were last year,” he added.

“Just look at the first three races; look at both qualifying as well as race results.”

The primary concern raised by Szafnauer with the FIA was that the rule change was pushed through on safety grounds, given the concern regarding the tyres, only given Pirelli developed new tyres for 2021 the underlying reasons no longer existed.

As such, he called for the rule to be overturned – an incredibly unlikely outcome mid-season.

Szafnauer explained that his team raised concerns when the changes were first put forward, and suggested alternative ways to get the same result with a more uniform impact on teams, though they fell on deaf ears.

“We proposed to not have the second changes made, because the changes came in succession, and we thought the first change that was applied was enough to slow the cars, so we suggested to just keep it there,” he explained.

“But there were other suggestions that were proposed, and not by us, but early on and I’ll give you the example of reducing the rear wing size and that would have affected everybody equally, but that wasn’t chosen.”

Discussions between Aston Martin and the FIA have not yet concluded, though the prospect of the argument ending up in court has abated – partly because it is believed a clause in the Concorde Agreement which binds teams commercially to the sport prevents them from doing so.

“We had good discussions with the FIA to understand the process and how we got to where we got to,” Szafnauer began.

“The discussions have almost come to an end. I think we made good process to have a better understanding of what transpired.”

He then elaborated on the matter, conceding that his team would have to make up the ground it seemingly lost due to the rule changes.

It triggered a fascinating exchange with Franz Tost and Guenther Steiner in front of the world’s media over the Spanish Grand Prix weekend.

“What we have to do now is, like I said before, we have to work hard to make up the deficit that was introduced over the winter,” Szafnauer said.

“We have a new package here on both cars that was introduced in Portimao – but Portimao, the nature of the circuit is a lot of low-speed corners, so we’ll be able to evaluate what we’ve done here and we have to work hard to bring even further upgrades later on in the year to get us back to the performance levels that we had last year.”

Asked for his thoughts on the situation, Tost did not mince his words.

“We all know the process when a new regulation is coming in and this new floor regulation was fixed last year and was agreed by all the teams.

“It was sanctioned by the Formula 1 Commission and the World Motor Sport Council and therefore I don’t see any chance that this regulation can be in the short term changed.

“Then it is up to the teams to interpret the regulations the best possible way and get the most out of it.”

Haas’ Guenther Steiner then added, “The regulations they were changed, it was voted.

“I don’t know the detail of what was requested for and it wouldn’t make a lot of difference to us anyway.”

It was at that point that Szafnauer interjected.

“Just for the record, it wasn’t voted, it was done on safety grounds and it was unilateral.”

Tost attempted to argue the point, but was steamrolled by the Aston Martin boss.

“The Technical Working Group doesn’t have a right to vote anyway.

“It was just an indication, but then it was done on safety grounds anyway. That’s just for the record.”