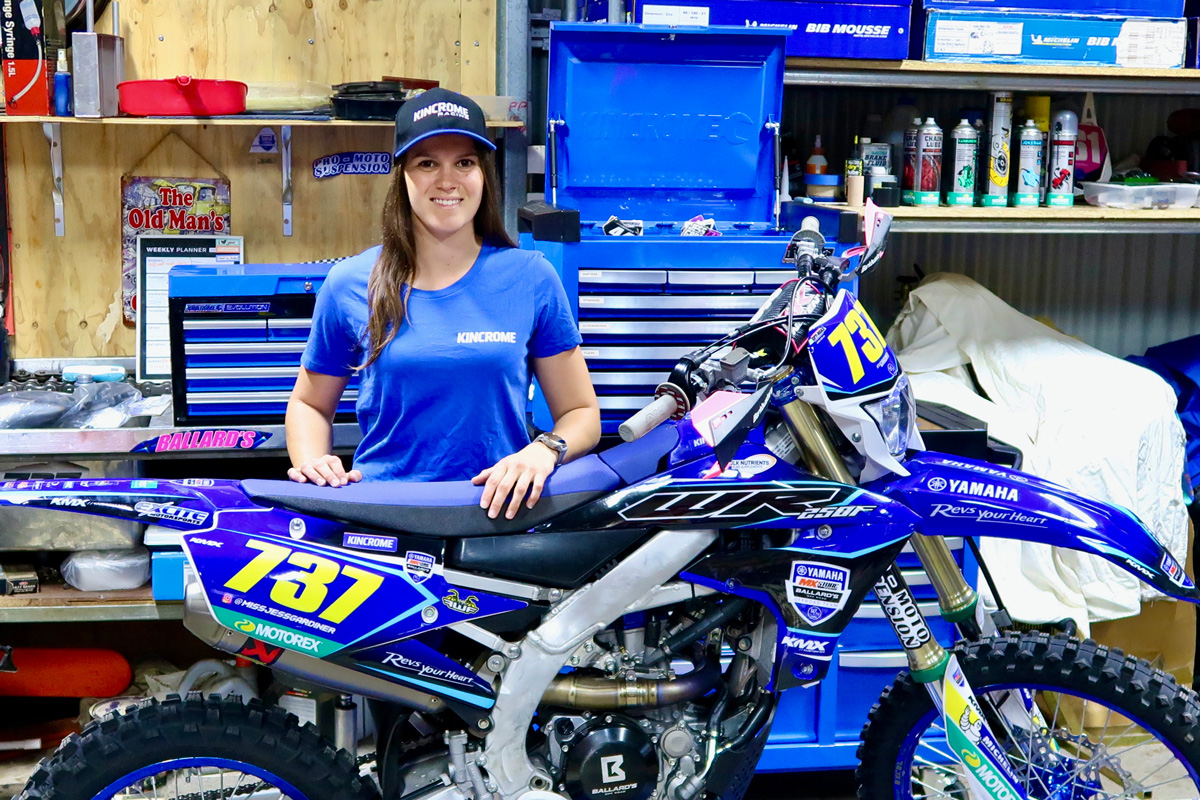 Australia’s own international motorcycle enduro champion Jess Gardiner has received some positive news after a few tough weeks on the sidelines.

Gardiner broke her scapula during the second round of the national titles after crashing hard in a rough whooped sand section, but finished the race to clinch valuable championship points.

She will be back on the bike by the end of the month preparing for the King of MX finals in June and the Hattah desert race in July.

In 2013, at just 20 years of age, Gardiner became the first Australian to win the women’s class of the International Six Day Enduro – a feat she repeated the following year.

She has been a member of the Australian team for nine years with the women having won the International Six Day Enduro event six consecutive times.

Team Kincrome is an innovative collective of all the stakeholders in the Kincrome business and brand and has been extended to include some of Australia’s leading motorsport competitors and entities.

The captain of Team Kincrome is Supercars driver Lee Holdsworth who is a brand ambassador for the company.

Another major membership group of Team Kincrome is the 55,000 Blue Blood members, who are loyal to the Kincrome brand and products.

Gardiner is also a six-time Australian Off Road women’s champion and a five-time winner of the Australian Four Day Enduro.

Now 28, Gardiner is determined to defend her Australian crown this year, but first has to recover from the broken scapula.

“I have enjoyed a relationship with Kincrome for some time and to be officially included as part of the new Team Kincrome format is terrific,” said Gardiner.

“Kincrome is a great Australian brand which has a great range of products which we are using every day when we are prepping, training or racing.

“The broken scapula is a bit of a hiccup, but we are doing what we can in the meantime to be fit and ready for when I can get back on the bike.”

In 2017 Gardiner won both the European and French Endurance titles.

Gardiner juggles her training and racing with full-time employment as a heavy equipment operator with JK Williams Contracting in Penrith, NSW.

Her day job sees her in control of some of the biggest mining and earth moving equipment on the planet.

Kincrome CEO, Nick Pritchard, said he was proud to welcome Gardiner to the Team Kincrome “family”.

“Jess (Gardiner) is one of Australia’s true motorsport talents and we are proud to have her as part of Team Kincrome,” said Pritchard.

“She has an incredible work ethic on and off the track and represents the true core values of what our business and brand is all about.

“Team Kincrome is an evolving entity that will develop as Kincrome continually moves forward with our business and motorsport and community partnerships.”

Despite all her commitments, Gardiner finds time to coach and mentor younger riders under her Off-road Riding Institute programme and manages her own race team (Yamaha MXstore Ballard’s Off-road Team).

A valuable member of Team Kincrome, Gardiner, who lives in the Blue Mountains, West of Sydney, is also sponsored by multiple companies under the Yamaha MXstore Ballards Offroad Team banner.