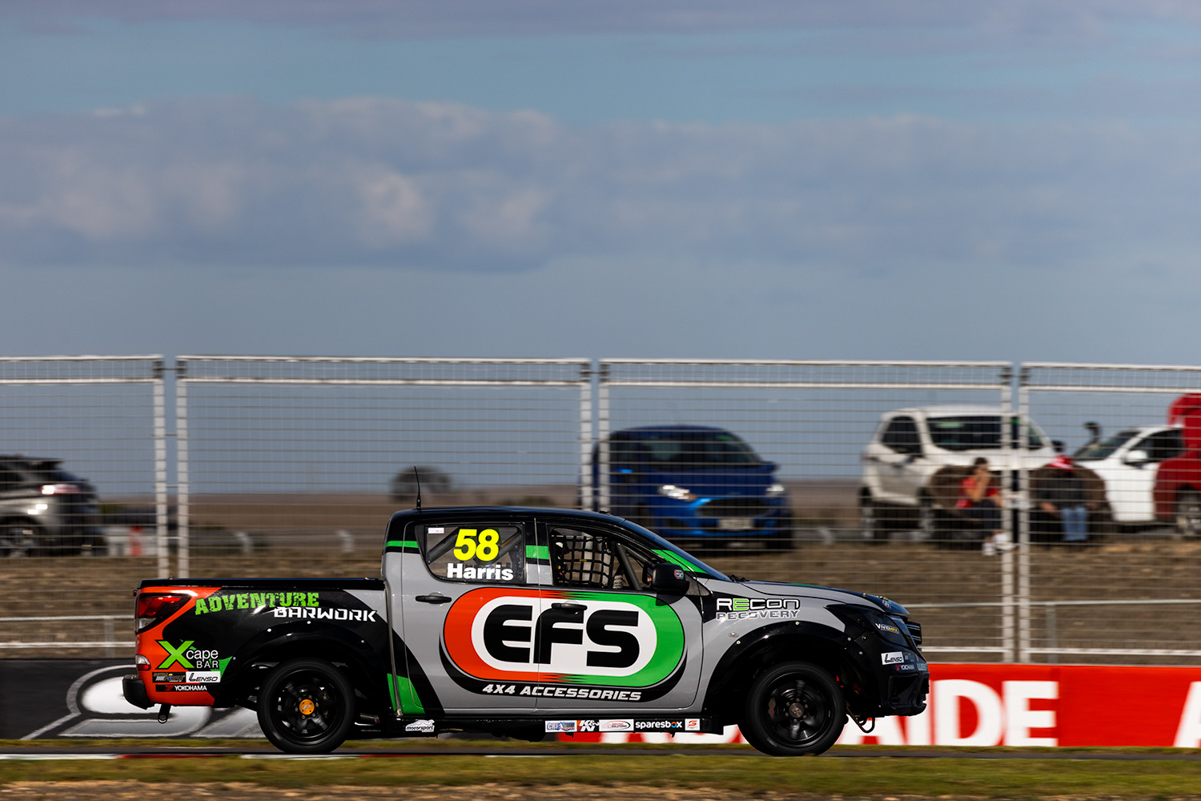 SuperUtes front-runner Ryal Harris believes that the series has become a genuine Supercars feeder category now that it is V8-powered.

Harris won this year’s first round of what is now the Haltech V8 SuperUte Series at The Bend, taking victories in the first two races and a second placing in the latter.

The category returned with every vehicle in the field now fitted with a Chevrolet LS3 engine after two years as turbo diesels and a break in 2020, originally for reasons of development of the new specifications.

Harris won the 2018 series and took third in the 2019 season, the two which comprise the diesel era, in addition to the three titles he scooped during a long period in the V8 Utes of old.

The Queenslander also has a smattering of Super2 experience, and says that a V8 SuperUte is very much reflective of a Supercar.

“It’s probably not highlighted to everybody just how similar they are,” Harris told Speedcafe.com.

“They’re like a watered-down Supercar, apart from obviously the top-heavy aspect of it.

“But they move around heaps, they’re hard to drive; Cameron Crick and those other guys at the front on the weekend, they were making heaps of mistakes. They’re definitely hard to drive on the edge.”

Harris was already mostly positive about the SuperUtes, despite a stated a view midway through the inaugural diesel season that they needed more power to win fans over.

He considered them more of a race car than the Commodore and Falcon V8 Utes, which were much closer to roadgoing specification, including due to the brakes.

Dealing with data and the Haltech engine management system is also said to be good training for those with an eye to a Supercars career.

“It plugs a gap,” declared Harris.

“Obviously, state level, there’s Excel series, and then when they want to make that jump and they don’t have the budget to go Super2…

“It’s a big jump to go from Excels to Super2 anyway; kids do it, but you’ve got to have bulk money and bulk test days, so I think it’ll plug that gap.

“Being on the Supercars calendar, you’re in front of all the teams, you’ve got good TV, and the series is run well, so I think it’s definitely going to be a feeder category again, and more so than the old V8 Utes because they’ve got more in common with a Supercar.

“They’ve got Supercar brakes, MoTeC data, all that sort of stuff… The old V8 Utes were completely opposite because they had a booster still in them – you had to have real sensitive brake pressure – but in the SuperUtes, you’ve got to stand on the brakes pretty hard.

“There’s a control pad up on the rollcage, above your head. It’s got the launch control, thermo fans, fuel pump, wipers… It’s a really good system.

“My team said that the Haltech guys were awesome to deal with, and even learning all that stuff, they’re way more similar to a Supercar now than people think.”

Harris also had strong praise for the squad, having been able to win the first two races at The Bend in relatively comfortable fashion.

“Most of the cars in the field, they’ve been testing for a few months, and we only decided to do it probably four weeks ago,” he noted.

“Two-and-a-half weeks ago, my car was sitting in a car park in Coomera out at The Boat Works, so the team’s done an awesome job to get it up to scratch.”

Online opinion was split, with some fans pleased to see V8s return while others questioned the relevance of watching Mazdas, Mitsubishis, Toyotas, Fords, and also a Holden, get around with Chevrolet engines under the bonnet.

Harris is firmly in the former camp, and rated the new package highly despite some teething problems around suspension which reared their heads at The Bend.

“I’ve always been ‘It’s all about entertainment,’” he stated.

“I don’t give a hoot about market relevance. People just forget that it’s all about racing.

“On the whole, [I] definitely enjoyed driving them; they’re a big improvement.”

Round 2 supports the Winton SuperSprint, on May 29-30.