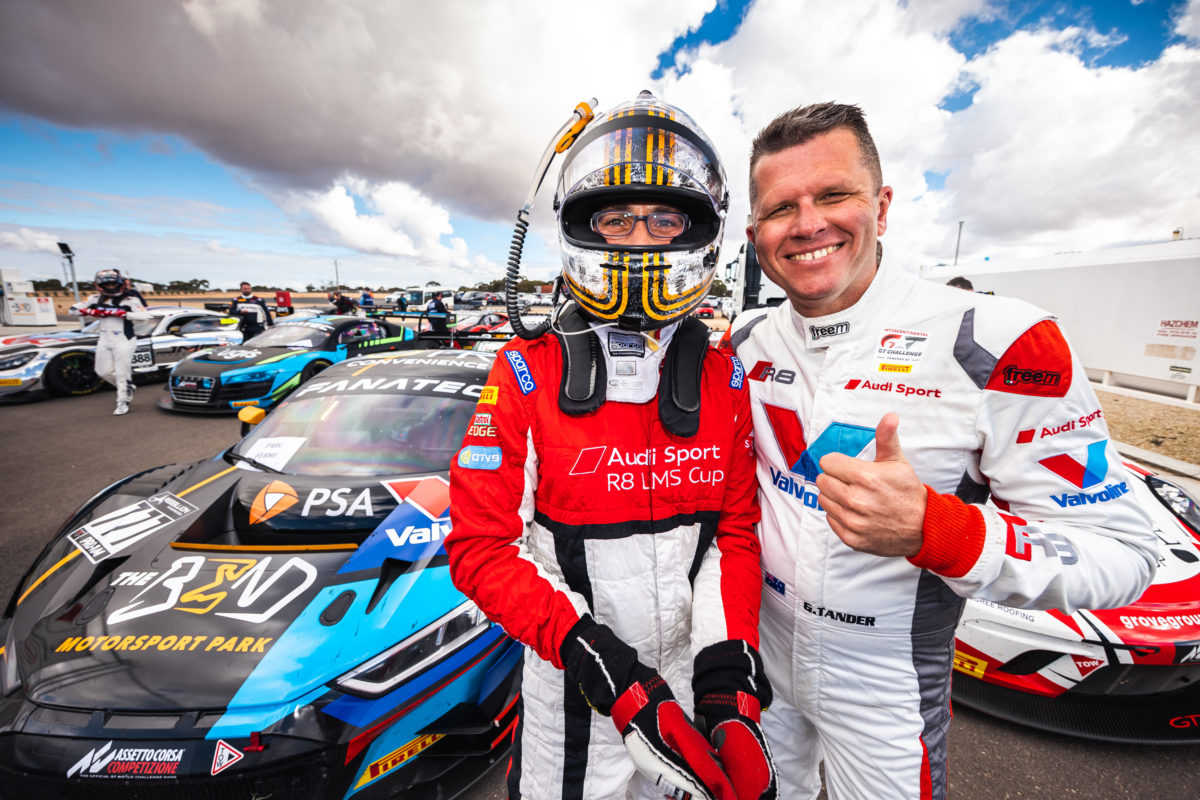 Garth Tander and Yasser Shahin have been confirmed as winners of Race 2 of Round 3 of Fanatec GT World Challenge Australia Powered by AWS despite incurring a penalty.

The #777 The Bend Audi was the subject of a post-race investigation at Shahin’s home circuit after it was released into the fast lane in the path of the sister #24 Bostik Audi during the mandatory pit stop cycle.

Officials saw fit to issue a five-second penalty for the unsafe release, which caused contact, but Shahin had taken the chequered flag just over 10 seconds ahead of the #4 Grove Group Porsche which was next on the road.

As such, Tander and Shahin, who lead the Pro-Am class championship, hold on to their victory in the weekend finale at The Bend Motorsport Park.

Tander had taken the lead off Brenton Grove during the opening stint before Shahin had to overcome the impact of the full 15-second pit stop handicap which they were hit with having also won their class in Race 1.

Both admitted that they had in fact struggled this weekend, despite now going five from six in Pro-Am in 2021.

“It’s a tough race,” said Tander, who exited the first corner in second spot, behind Grove, after both started from Row 2.

“They’re never easy but I got a good start, but I didn’t realise Brenton had got such a good start on the other side of me so it was really hard for me to get past him.

“But I managed to use some lapped traffic and got by which opened a small gap.

“I knew we needed a bigger gap before the pit stop because of our pit stop times from yesterday’s race. Then Yasser jumped in and did what he does! Just mowed them down and did a really good job.

“We’ve been struggling with the car this weekend being not quite right. It still wasn’t right in the race but we got a lot better, and Yasser did an awesome job.

“Yeah, there was a little bit of contact in pit lane between teammates but hey, that’s racing.”

Shahin added, “[Tander] did an amazing job, the way he got off the line.

“I just didn’t expect him to hold P2 let alone take P1 from those guys.

“The Porsche is just such a great car and they’re doing a great job with it but every second of the lead he gave me the car was one less second I had to catch up.

“Garth is right, though; we’ve been struggling with the car all weekend but his car knowledge and my track knowledge here really paid dividends.

“I drove the wheels off it for the first half and then it was just managing it because it was getting quite greasy out there.”

The final sprint round of the season takes place at Sandown, on the Shannons Motorsport Australia Championships programme, on September 17-19.