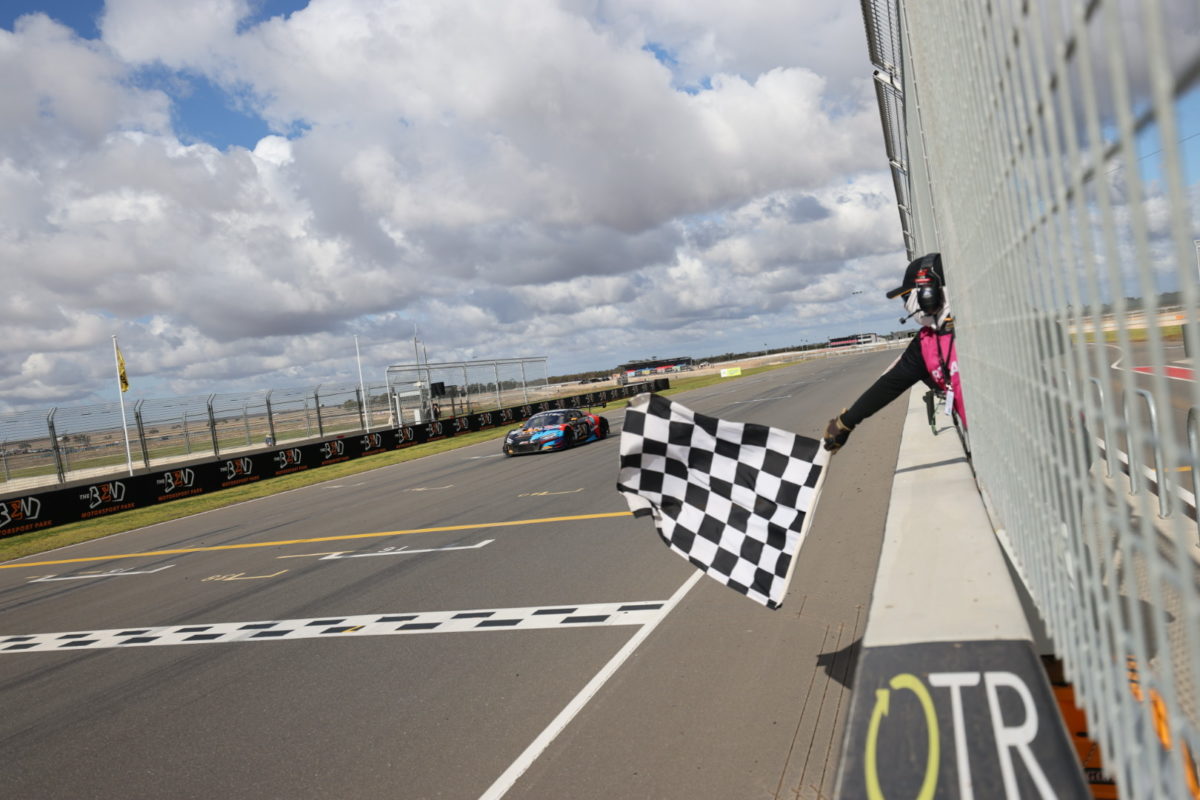 Shahin drove the #777 The Bend Audi R8 LMS Evo to the chequered flag with a margin of 10.5019s over the rest of the field after 30 laps of racing in the Round 3 finale.

However, the entry faces a post-race investigation into an alleged unsafe release, ironically into the path of the sister #24 Bostik Audi R8 LMS Evo of Dylan O’Keeffe and Tony Bates.

Should a sufficiently large penalty be issued, Brenton Grove and Stephen Grove would inherit victory after the latter finished a provisional second place in the #4 Grove Group/Dasher + Fisher Gin Porsche 911 GT3 R.

Third for now, outright and in the Pro-Am class, is Triple Eight Race Engineering’s #888 Mercedes-AMG GT3, which was piloted by Broc Feeney and Prince Jefri Ibrahim.

With sunny skies over Tailem Bend, everyone started on slicks, unlike the mix-up of the day prior.

Feeney shared the front row with O’Keeffe but the four Pro-Am entries were quickly as many cars wide as they got up to speed on the long pit straight.

Brenton Grove started fourth but swept into the lead from the very outside of that quartet at Turn 1, heading Tander, Feeney, and O’Keeffe through the opening corners.

O’Keeffe dropped a spot, to Paul Stokell (#124 KFC Audi, Trophy class), when he ran wide at the Turn 6 hairpin, while the top three skipped 1.7s clear of the rest on Lap 1.

However, that was where the tide started to turn.

While all of the top three had been turning up the pace, Tander caught up to the #4 Porsche and then made a bold move down the inside at Turn 3 on Lap 12.

That forced Brenton Grove to play defensive to Feeney at the Turn 6 hairpin and while he managed to at least hold second position, Tander was already skipping away.

The top five all pitted at the end of Lap 16, their last chance before the compulsory pit stop window closed, at which time the deficit to leader Tander was around 1.5s for Brenton Grove, around 2.3s for Feeney, and around 8.6s for O’Keeffe.

However, the #777 Audi copped the full 15-second pit stop handicap due to its class win in Race 1, whereas, at the other end of the scale, the #4 Porsche had no extra time to serve.

Stephen Grove, in the 911, was therefore sent on his way with an eight-second lead over Ibrahim in the #888 Mercedes-AMG, while Shahin was more than five seconds further back in third, behind the wheel of his #777 Audi.

There was also contact between the Audi Sport Customer Racing Australia entries given Shahin was released into the fast lane having not fully cleared Tony Bates in the #24 R8.

While Car #24 was issued a drive-through, counterintuitively, it would later be clarified that the penalty was for undercutting the minimum pit stop time, and that the contact is going to a post-race investigation.

As that was coming out in the wash, Shahin lunged past Ibrahim on Lap 19 at Turn 14, at which time Stephen Grove was over 10 seconds to the good.

Meanwhile, save for the ebb and flow of traffic, Shahin was seriously eating into Stephen Grove’s lead.

He went down the inside of the #4 Porsche at the start of Lap 26 and, by the time he was back to the control line, the margin was 2.0s.

Shahin continued to run away from Stephen Grove although he and Tander, the Pro-Am championship leaders, now face a nervous wait to see if they keep the win.

Ibrahim got home just over 10 seconds behind Grove, Schumacher was fourth to the chequers but first in the Trophy class, and Bates got back to fifth outright.

The outright winner of Race 1, Brett Hobson, was an early retirement due to gear selection failure in the #96 Hobson Motorsport Nissan Nismo GT-R.

The fourth and final sprint round of the season takes place with the Shannons Motorsport Australia Championships at Sandown on September 17-19.

Championship points: GT Am (AM)