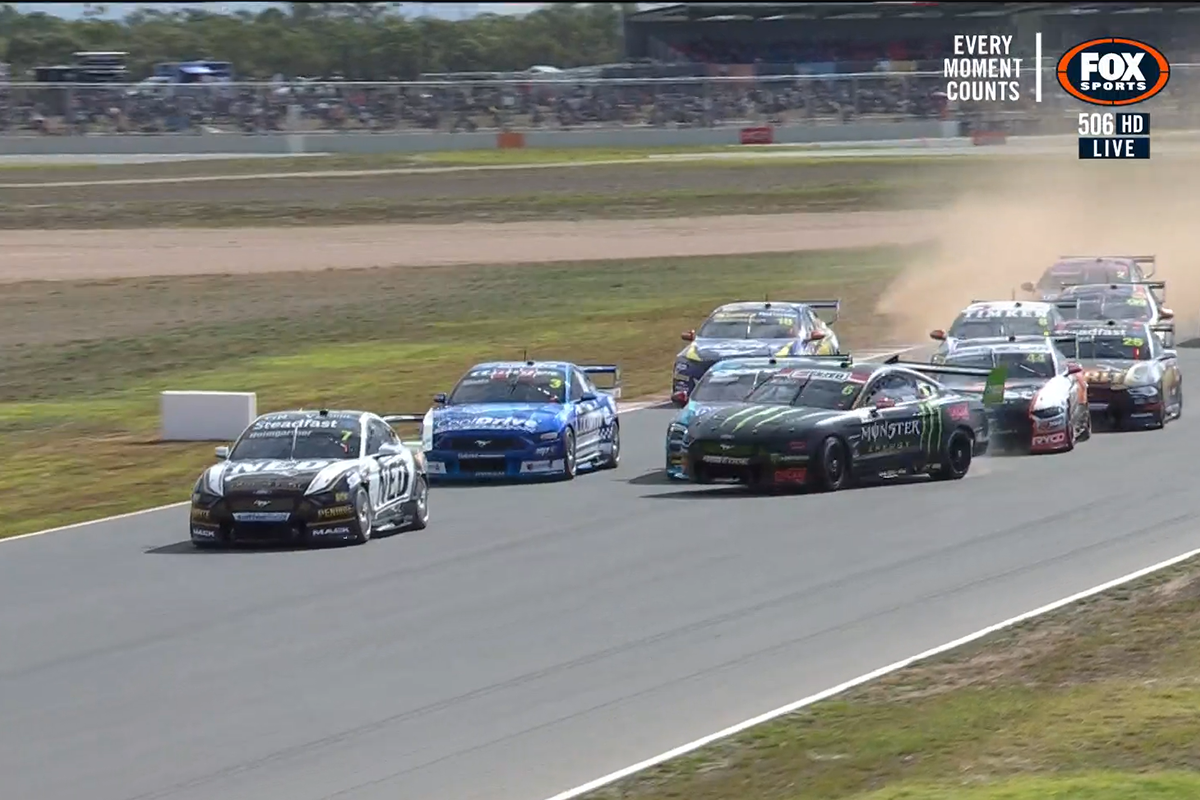 Chaz Mostert was left bemused by a first lap tangle that took him and several more out of contention in the second Supercars race of the OTR SuperSprint.

Slade, who got hung out on the grass, swung back onto the racing line. In avoidance, the Mobil 1 Appliances Online Racing entry of Mostert hooked left.

Unsighted, Mostert drove into the path of Cameron Waters in the Monster Energy Racing car and the pair made contact.

That plucked the right rear wheel out of the #6 Ford Mustang, which spun into the path of Slade in the #3 who spun in the dirty run-off.

Mostert and Waters would return to the pit lane and ultimately retire while Slade would recover to finish 15th.

Speaking after the incident, Mostert said there was very little care taken on the first lap.

“Yeah, I didn’t really know I was at the carnival, to be honest,” Mostert said.

“I thought we were racing Supercars, not dodgem cars. It was chaos.

“Everyone really didn’t care about tearing up gear, they just wanted to push cars off and try and wrestle for positions in the early spot I suppose.

“That’s our racing at the moment. Yeah, I mean I was behind Sladey and obviously Andre jammed it up the inside of him and pushed him off.

“So I had a car on my right, watching him come back on at an angle thinking he was going to shunt into me. As I went left to miss him I found Cam somewhere up the inside as well.

“To be honest, I have no idea what’s going on. There’s cars left, right, and centre. Probably just paid to be on the far inside which I was on the wrong side of the track.”

Walkinshaw Andretti United would repair Mostert’s car and return to the track, albeit only for one lap, which proved to be the fastest lap of the race.

Asked if the car was okay, Monster remarked, “It felt terrible.”

Waters, meanwhile, was less terse in his assessment of the incident.

“I got beside Chaz and I kind of cleared him. I thought I was all good. Obviously Sladey was coming on and Chaz probably over reacted a little bit and tagged me. It’s a little frustrating, it’s always Chaz and I.

“The boys will fix her up and make sure that we’ve got a straight, fast car for the next one and hopefully we can bag some points because this will hurt our points haul a bit.”