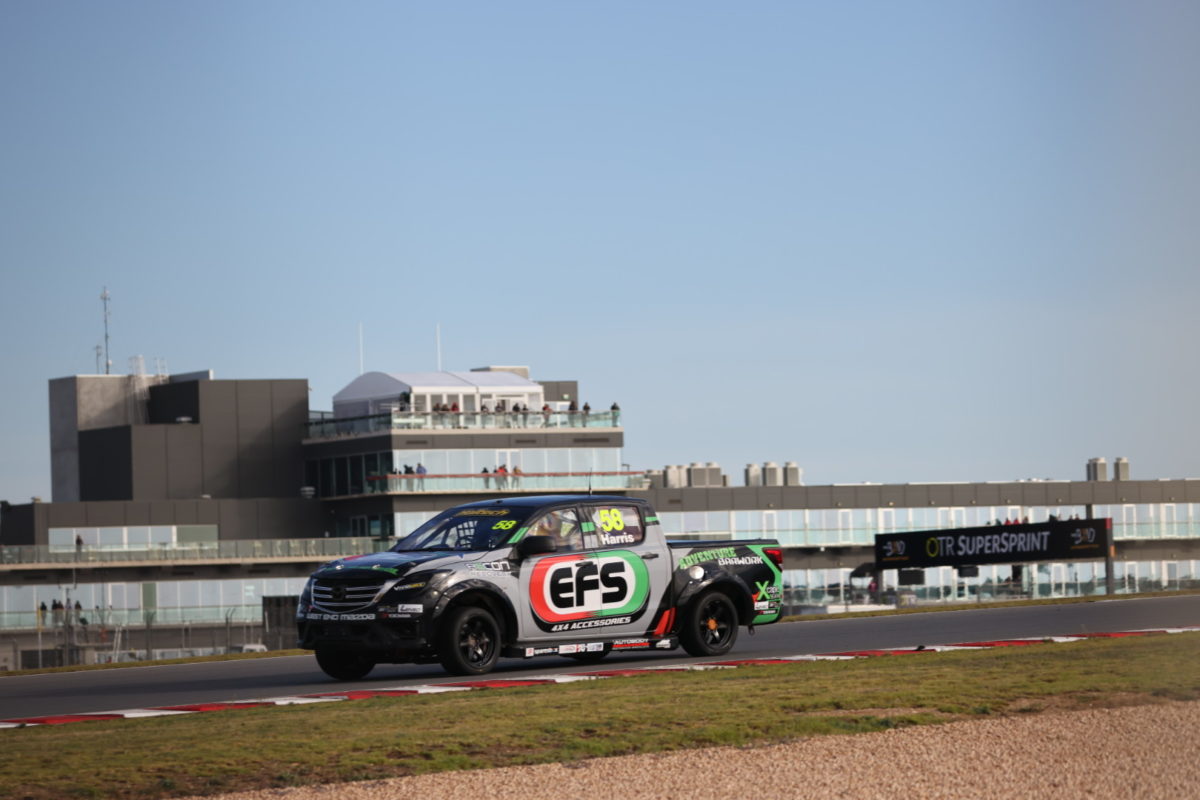 Ryal Harris has taken a second race win in as many starts in the Haltech V8 SuperUte Series at The Bend, this time in the reverse grid encounter.

Despite being put back to sixth on the grid due to the inversion of the top 50 percent, the Peters Motorsport driver spent all but part of the opening lap at the head of the field.

Harris prevailed in the dry eight-lapper by 2.2712s over Cameron Crick, who had to withstand pressure from fellow Sieders Racing Team pilot Aaron Borg for much of the contest.

Crick had joined Harris back on Row 3 of the grid having finished second in Race 1 but leapt into a clear lead before the field even arrived at the braking zone for Turn 1.

Harris also got a good launch to be next in the queue, ahead of Ben Walsh (Western Sydney Motorsport), Borg, and front row starters George Gutierrez (George Gutierrez Racing) and Craig Woods (WSM).

When Crick got loose through the downhill right-handers, Harris threw the #58 Mazda down the inside to seize the lead, as Walsh dropped back on the opening lap.

Borg also tried to go down the inside of Crick a little further around the circuit and while he was rebuffed then, he remained a thorn in the side of the man in #7.

Harris was 2.6s up the road at the end of the standing lap, although the margin dropped by multiple tenths per lap for the next handful of laps despite Crick still facing pressure from Borg and Gutierrez.

However, that may have been a case of the race leader simply managing his advantage, with the 2018 SuperUtes Series winner rebuilding some of the gap on his way to a comfortable victory.

Crick was able to keep Borg behind him when the chequered flag flew, while Gutierrez fell back in the closing stages and finished fifth, behind Woods.

Walsh ended up sixth and Christopher Formosa (Allgate Racing) seventh, ahead of Wayne Williams (SRT), Jaiden Maggs (SRT), and Gerard Maggs (SRT), the latter of whom was fifth when he looped Car #68 at the right-handers on Lap 2.

Craig Jenner (Craig Jenner Racing) and Michael Formosa (Allgate Racing) made it 12 finishers from as many starters, although Craig Dontas (SRT) was a non-starter after his crash in Race 1.

There was also a bizarre moment when Michael Formosa ended up driving around the GT Circuit, The Bend’s 7.77km variant.

The debutant had seemingly become confused by the divergence in race track layouts when he spun Car #94 midway through the race, although he eventually found his way back to the International Circuit and got home two laps down.