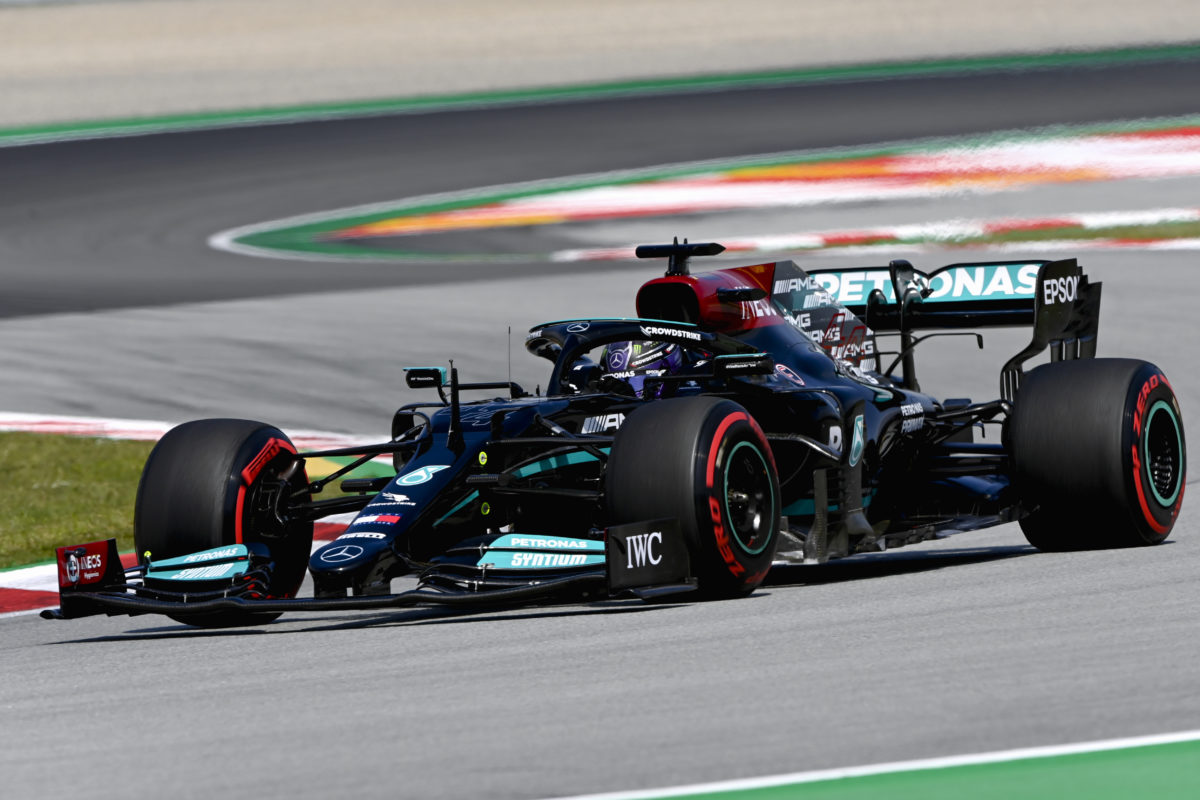 The Mercedes driver headed Max Verstappen in qualifying for the Spanish Grand Prix by just 0.03s to reach the milestone.

Third fastest was Valtteri Bottas, while Daniel Ricciardo will line up seventh, two places ahead of his McLaren team-mate Lando Norris.

The start of the session was delayed as work was carried out on barriers at Turn 9 damaged by one of the support classes.

When the session got underway, the early pace was set by Bottas with a 1:18.005s on a set of medium tyres.

Lando Norris’ first flying lap was hindered by traffic at the penultimate corner, the McLaren driver having to manage his way by two cars while tucked up behind Mick Schumacher.

It caught the eye of officials, who confirmed they would investigate it post-session.

There were no such issues for Pierre Gasly, who recorded a 1:18.190s to shoot to third.

With three minutes remaining, the field from ninth down headed back out on track.

They were joined by Hamilton, who’d fallen to sixth, the Mercedes driver switching to a set of soft compound rubber, though the Englishman did nothing more than tour around and return to the pits.

Charles Leclerc booked himself a spot in Qualifying 2 by rising to second fastest, a 1:18.041s.

Norris jumped to the top with a 1:17.821, the McLaren driver having dropped into the elimination zone after his earlier lap was compromised.

Qualifying 2 began, though more than a minute elapsed before the two Mercedes headed out on track.

Hamilton was the first driver to start a flying lap, setting a 22.026s through the first third of the circuit.

Both had used a set of the soft compound tyres, as did Verstappen who logged a 1:16.922s to move nearly 0.5s clear of Bottas.

Fourth fastest after the opening exchanges in the segment was Norris on a 1:17.696s.

The two Ferraris then slotted in fifth and sixth, with Fernando Alonso seventh for Alpine.

Most of the remaining runners began their second flying lap inside of the final two minutes.

Electing not to was Verstappen, the Dutchman comfortable enough with his early effort to remain in the garage.

Hamilton had headed out on used soft tyres, while Bottas had bolted on a new set.

Perez extricated himself from the drop zone with a 1:17.669s to go fifth fastest.

Ricciardo then marked the end of the segment with a 1:17.719s to move up to eighth, having set the fastest first sector of anyone in the session.

Both Mercedes drivers had improved on their times from earlier in the session, seemingly locking Hamilton into the start of Sunday’s race on a set of used tyres.

Bottas meanwhile improved to a 1:17.142s to remain second on another set of soft compound tyres.

Qualifying 3 began with all 10 runners heading out.

Norris headed the field, recording a 1:18.010s to start the final segment of the three-part qualifying hour.

A spin for Perez ruined his first effort, and seemed to hinder Hamilton’s lap too.

Fourth was Ocon, the Frenchman logging a 1:17.580s to slow in ahead of Sainz.

With little more than two minutes remaining, the all 10 runners trundled down the pit lane ahead of their final flying laps.

Hamilton was the first to start a lap, followed by Bottas and Verstappen.

Missing the line was Ricciardo, who crossed the line to start his lap after the chequered flag had emerged – the Australian a victim of the traffic jam at the end of the lap after running last on the road.

It was a solid start to the lap but he was unable to go on with it, slower than his earlier effort by 0.3s.

The results marks Hamilton as the first driver in the sport’s history to claim 100 pole positions, with the Englishman now looking to record his 98th career win in Sunday’s race.