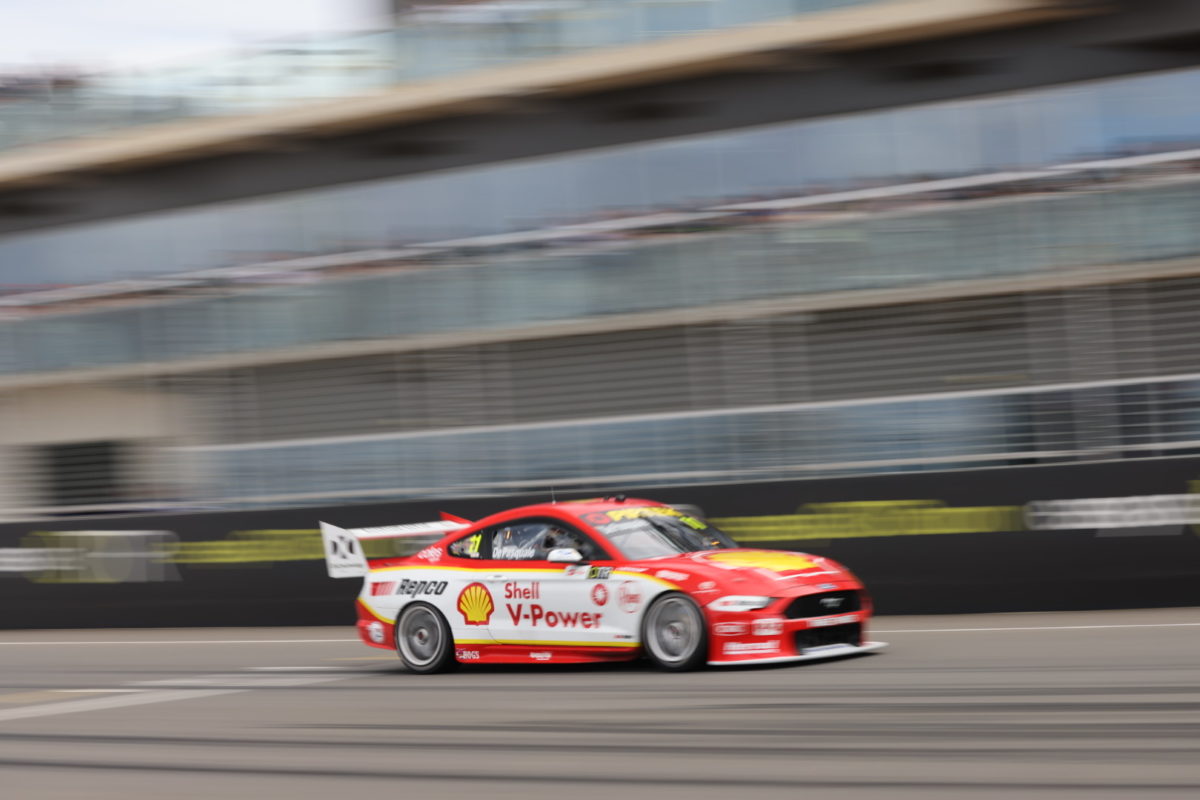 Anton De Pasquale has achieved his first victory for the Shell V-Power Racing Team, and a milestone for Ford, in Race 10 of the Repco Supercars Championship at The Bend.

The 25-year-old virtually led all 24 laps while Will Davison saw off a late challenge from Shane van Gisbergen to make it a one-two for the Dick Johnson Racing Mustangs in what was the 400th race win in the Australian Touring Car Championship for the Blue Oval.

While van Gisbergen could not find a way through on #17, third represented a gain of 10 positions relative to where he started, in a race where trouble struck his key championship rivals.

Red Bull Ampol Racing team-mate Jamie Whincup could only lift himself to 11th from 15th on the grid while neither Chaz Mostert nor Cameron Waters finished after they yet again came together, in opening lap carnage.

Van Gisbergen’s championship lead is therefore 178 points over Whincup, with one race to come this weekend at the OTR SuperSprint.

DJR had locked out the front row and while Davison made a slightly better start, it was pole-sitter De Pasquale in the #11 Mustang who led through the first corner thanks to having the inside line.

Mayhem unfolded just behind them when Andre Heimgartner (#7 Ned Mustang) went down the inside of Tim Slade (#3 CoolDrive Mustang) at the Turn 5 sweeper.

Slade skewed sideways on the dirt and as Walkinshaw Andretti United’s Mostert moved left to avoid him, there was heavy contact with Tickford Racing’s Waters.

That not only sent Waters spinning but also caused significant damage for both, and neither WAU could repair the #25 Mobil 1 Appliance Online ZB Commodore nor Tickford the #6 Monster Energy Mustang in time to salvage any points.

That was due to a touch from David Reynolds (#26 Penrite Mustang), who had Brodie Kostecki (#99 Boost Mobile ZB Commodore) down his inside, although stewards would opt to take no action over the incidents.

Whincup (#88 ZB Commodore) was 17th at the end of the first lap and Slade 19th due to being carted wide also by Waters’ spin.

De Pasquale’s lead was almost two seconds at the start of Lap 3 when he locked up and ran off the race track at Turn 1, barely holding on to first position.

Courtney, who had briefly got ahead of Heimgartner, pitted from fourth when the window opened at the end of Lap 5, and was followed into the lane by Brodie Kostecki from fifth.

De Pasquale was back to an advantage of around 0.9s when he stopped for green working side tyres on Lap 6, while Heimgartner lost time when he stalled exiting his box a lap later.

Davison peeled off on Lap 10 and also had working side tyres changed, although some slow service on the front corner meant he merged behind Courtney on the race track in what represented a change for the effective second position.

De Pasquale was coming under pressure from Courtney and Davison until the latter went underneath the #44 Mustang to reclaim what he lost in the lane on Lap 14 at Turn 6.

Van Gisbergen stayed out until he pitted from the official race lead on Lap 16 and, having taken a fresh set of rears, rejoined between Davison and Courtney in an effective third position.

When Percat took service on Lap 17, the order was cleansed, with De Pasquale leading by a touch over 0.6s over Davison, and more than two seconds to van Gisbergen.

Davison chipped away at De Pasquale’s advantage for a period of time but soon had to worry about the looming threat of #97 in his mirrors.

Van Gisbergen got close but did not seriously shape for a move, while the heat came off De Pasquale.

The brand-new-for-2021 DJR driver took the chequered flag 0.9s ahead of Davison, who had van Gisbergen half a second further back.

“We know how much that means to all the fans. We’ve got massive support behind me and Will.

“I’m loving that and loving racing for the Shell V-Power Racing guys. They’ve given me a good car. We’ve got a one-two. It’s pretty cool. It’s a cool day.”

Regarding the lock-up, he said, “It shows how hard we’re all pushing. These things are pretty hard to drive.

“This morning, we’ve got green tyres, a cool track, it all feels good. Then this arvo it’s a bit warmer, a bit looser. Makes us work hard for it.

Whincup was close behind Pye in 11th, Slade finished 15th, and Percat got home in 17th.

Having incurred steering damage in the Lap 1 incident, Reynolds was last finisher, three laps down in 22nd.

Mostert set the fastest lap but scored no bonus points having not been classified as a finisher.