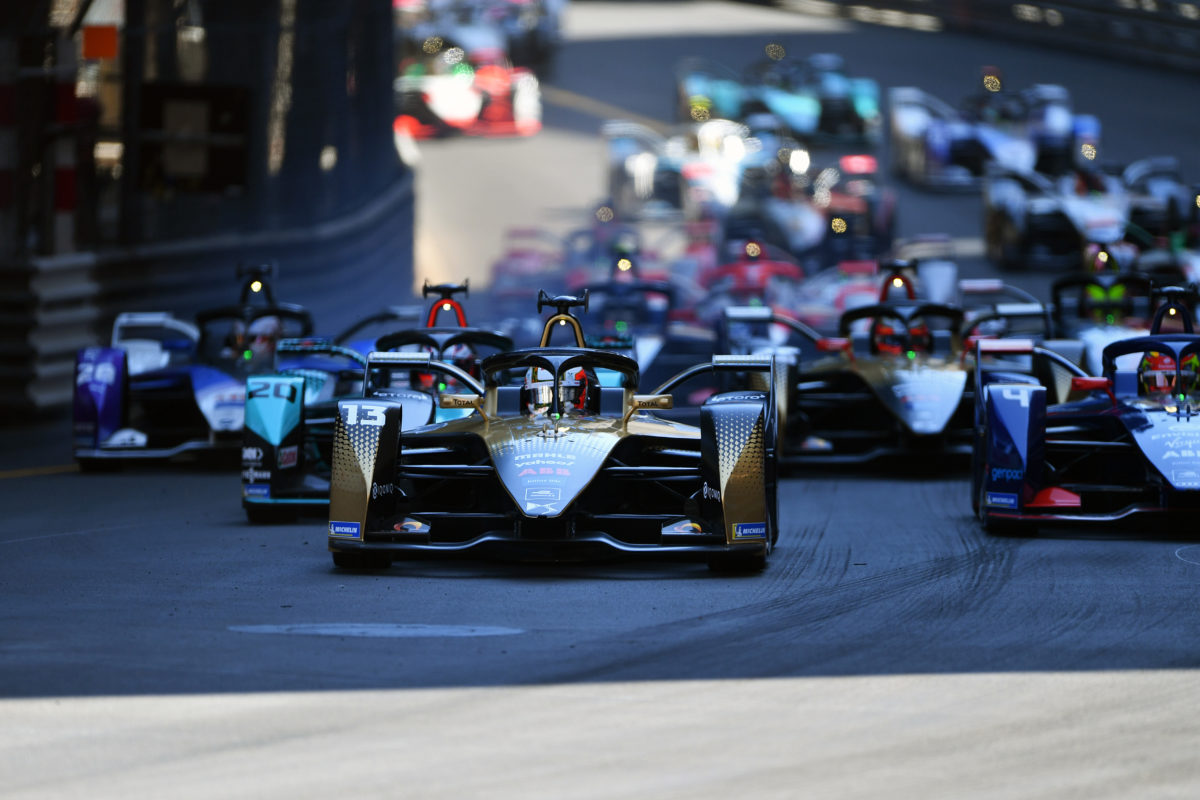 Antonio Felix Da Costa has won a nail-biting Monaco E-Prix with a last lap pass on Mitch Evans to steal the win.

Evans dropped to third in the run to the flag from the last corner as he ran out of useable energy, with Robin Frijns stealing the place at the line.

Da Costa led into the Ste Devout from Frijns and Evans while there was contact further back.

Midway around the lap, Alex Sims struck trouble at Mirabeau, while Jake Dennis also stopped on the opening lap and while both got going once more, the former was ultimately forced to retire.

Frijns harried Da Costa in the opening laps, the leader heading a train of cars before the Dutch driver made a move into Ste Devout to take the lead.

A mistake from Jean-Eric Vergne in fourth allowed the leading trio to skip free at the head of the race.

The Frenchman reeled them back in, dragging the train behind him, which stretched to Di Grassi in 13th, with him.

Half a lap later, he recovered them after Vergne ambushed Evans as the Nouvelle Chicane.

It saw Evans hold out Vergne by running off the track on the exit of the chicane, while Da Costa sailed by both to regain third.

Next time through, Frijns went for his second Attack Mode, slipping back behind the DS Techeetah driver briefly until reclaiming the lead at the Nouvelle Chicane later in the lap.

Da Costa slipped to third when he activated Attack Mode for a second time, Vergne rising to second as a result.

The Frenchman attempted to activate Attack Mode the next lap, but he was not successful in doing so.

It was a double hit as he lost track position by rounding the outside of Casino on the failed attempt with the need to go through the process again.

Having extended a lead, Frijns suddenly found himself under pressure from Da Costa after a slow lap with 20 minutes remaining.

Evans made it a three-way squabble out front courtesy of activating Attack Mode.

No sooner had the Jaguar driver joined the lead battle, Da Costa activated Fan Boost through the Tunnel to claim the lead.

Evans then completed a brazen double pass on both Frijns and Da Costa with 15 minutes remaining.

With Attack Mode activated, the Kiwi rounded his Dutch rival into Ste Devout. He then pounced on Da Costa as they headed up Beau Rivage to seize the lead.

Rene Rast came to a halt soon after, the Safety Car deployed after he tagged the wall exiting Ste Devout to end his race.

Racing resumed with six minutes remaining, Evans accelerating away as he navigated his way through the Swimming Pool complex.

The front four skipped clear, helped by Vergne activating Attack Mode and dropping from fifth to eighth as the race restarted.

With three laps remaining, there was contact into the Neuville Chicane, Evans holding on narrowly on the run to Tabac.

On the penultimate lap the lead battle had expanded to a train of cars as Evans looked to preserve what little energy he had left.

He began the final tour with three percent battery remaining. That became two percent as he headed up Beau Rivage.

Into the Nouvelle Chicane, Da Costa slid into the lead around the outside with his brakes locked.

Evans was then assaulted by Frijns, ceding the spot on the run to the flag as the Jaguar ran out of energy.

It was Da Costa’s first win of the season, while championship leader De Vries struck trouble late in the race and stopped on the run to Tabac.

He was able to get going, though ended the E-Prix outside the points. That saw Frijns take over at the top of the points standings.

Formula E heads to the Puebla ePrix double-header in Mexico next on June 19-20.