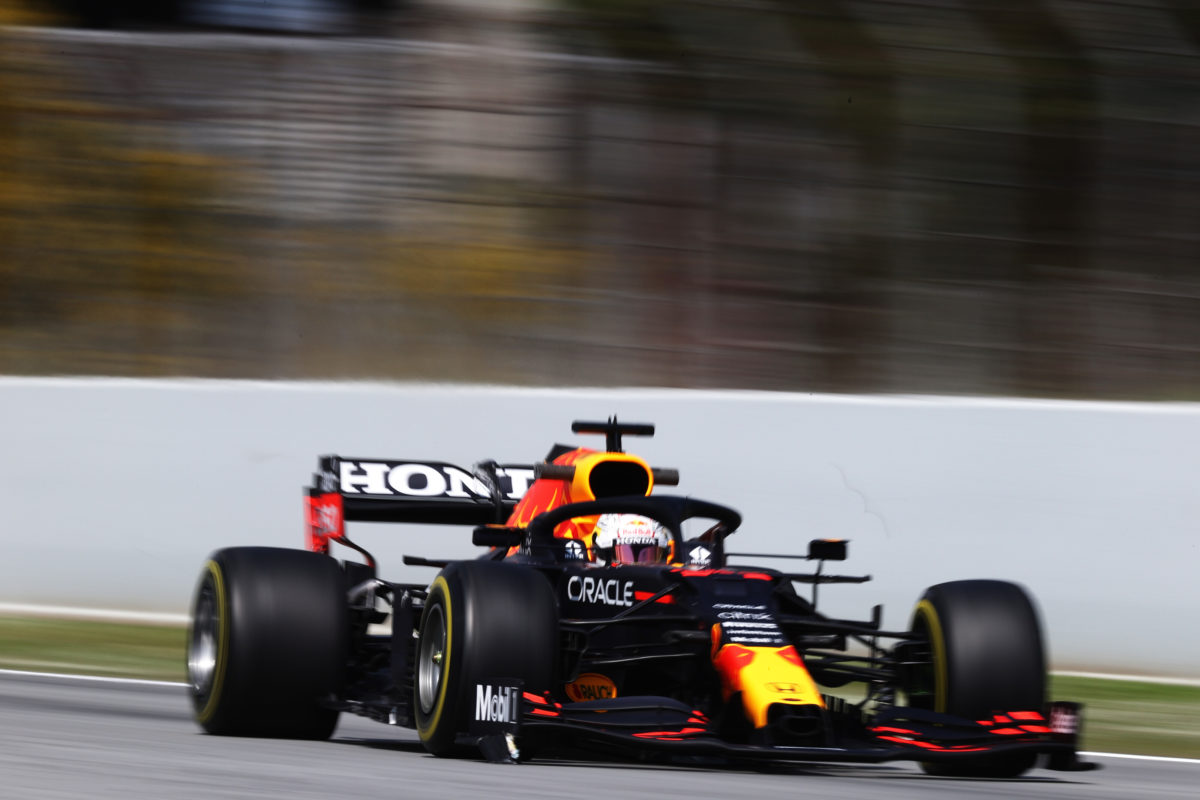 Max Verstappen topped Free Practice 3 for this weekend’s Formula 1 Spanish Grand Prix in a session which saw Red Bull lay down the gauntlet to Mercedes.

Verstappen proved 0.2s quicker on his fastest lap than Lewis Hamilton, the pair impressively followed by Charles Leclerc and Carlos Sainz for Ferrari.

The session began with a 23 degree air temperature, and the track slightly cooler than Friday’s second session at 37 degrees.

Blustery conditions which had dominated the previous afternoon had also abated, with the wind speed at just 0.5m/s, running as a cross-to-head wind down the front straight.

Fernando Alonso was the sole car on track as the session commenced, banking a 1:21.020s on a set of medium tyres to kick things off.

Sergio Perez and Daniel Ricciardo headed out next with some 10 minutes run in the hour-long session.

The two Alfa Romeos headed out on soft compound tyres, as did the too Haas entries.

With 15 minutes run, the circuit began to get busier with only the two AlphaTauris, Mercedes, and Max Verstappen keeping their powder dry.

Leclerc promptly went fastest of anyone with a 1:18.997s on a set of the soft compound tyres.

The Mercedes duo emerged with 37 minutes remaining in the session, both Bottas and Hamilton taking to the circuit on new soft compound tyres.

Bottas jumped to the top of the timesheets with a 1:18.423s with his first timed lap, edging Verstappen who recorded a 1:18.630s on a set of medium compound tyres soon after.

It was something of a signal of intent from Red Bull, a glimpse into the pace which saw the team confident following Friday practice despite languishing down the order by their lofty standards.

When Hamilton completed his first timed lap, the Englishman set a 1:18.304s, 0.3s up on Verstappen on a set of soft tyres thought to be in the region of 0.5s quicker.

The session fell into a lull approaching the 40-minute marker, with only Yuki Tsunoda on track.

As he pitted, the Ferrari pairing once again took to the circuit.

Leclerc’s early effort had seen him still fourth fastest, with Sainz only one spot back in fifth.

Their emergence on track was a prompt for others, as the circuit again began to busy.

Among them was George Russell, who was ninth fastest for Williams on a time equal to that set by Perez in the Red Bull.

The point of difference was Russell’s lap was set on soft compound tyres, and Perez on the mediums.

A solid lap for Sainz saw him improve to second fastest on a 1:18.410s, only to be pushed back one spot by Leclerc who banked a 1:18.308s. Both had used another set of new soft compound tyres.

Russell soon also improved, recording a 1:19.005s to climb up to seventh best for Williams.

With a quarter of an hour remaining, Hamilton set a 1:18.178s, a lap that would likely have seen him improve on his best had he not run marginally wide exiting the penultimate corner.

Norris then had a moment at Turn 10, running into the gravel but somehow managing to keep the car running to extricate himself.

It was a similar moment to that which Robert Kubica had experienced in Free Practice 1, but the McLaren driver was able to carry on.

Meanwhile, Raikkonen limped back to the pits after picking up a puncture to the right-rear tyre on his Alfa Romeo.

Hamilton soon improved to lower the benchmark with a 1:18.070s.

It came as Verstappen wound up for a flying lap, the Dutchman stamping his authority midway around the lap to be 0.5s clear.

He lost time in the final sector but still recorded a 1:17.835s to go fastest on a set of soft compound tyres.

With the exception of Gasly, who rose to seventh fastest on 1:18.535s, the session then began to wind down.

Verstappen climbed out of the car with a minute left on the clock having thrown down the gauntlet to Mercedes after looking to have been easily covered on Friday.

With practice now complete, the next time cars will be on track will be for qualifying at 23:00 AEST.