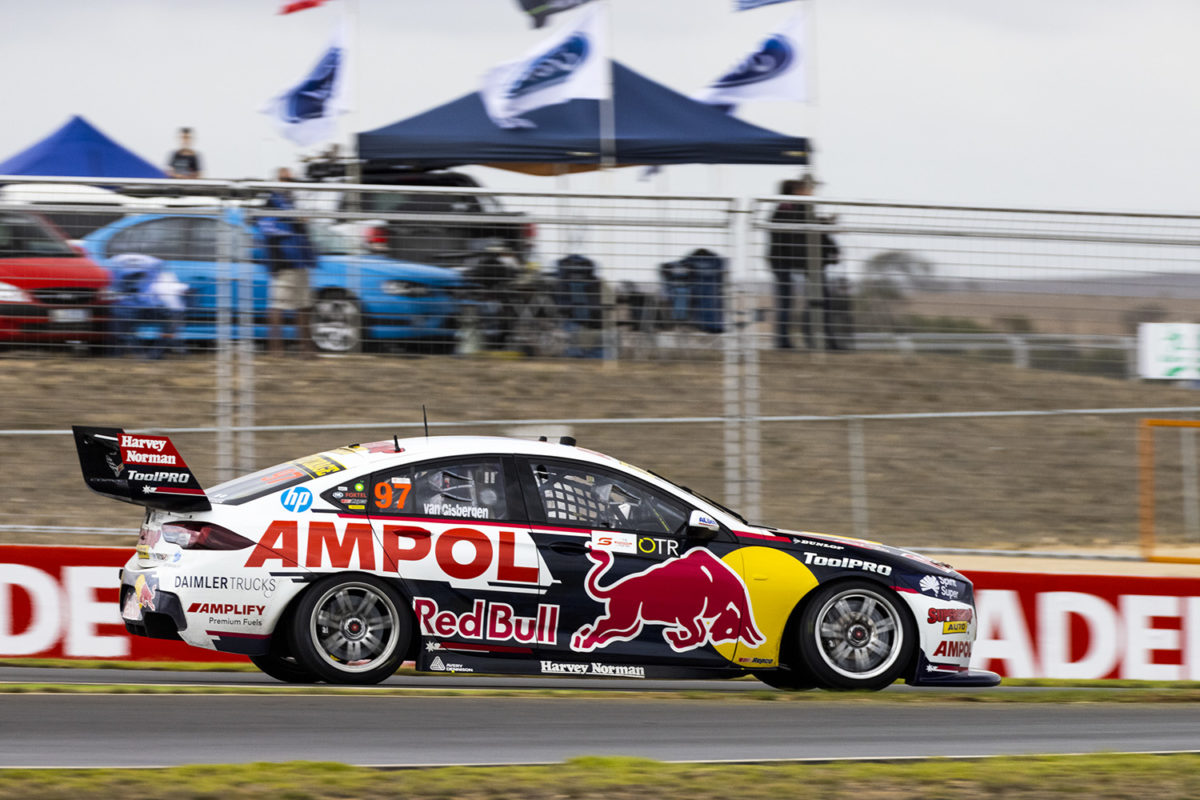 Shane van Gisbergen says that finishing seventh in Race 9 at The Bend is a “pretty good” outcome considering the “horrible” day which he endured.

The Repco Supercars Championship leader qualified an uncharacteristically low eighth for the opening race of the OTR SuperSprint event but jumped to third in a messy opening lap.

He lacked the pace to go with Andre Heimgartner or Chaz Mostert up the road, but remained third until a drama in his compulsory pit stop put paid to hopes of a podium.

Van Gisbergen was on the rise when he ran off the road on Lap 20 and dropped from seventh to ninth, although he quickly regained those positions due to errors from Will Davison and James Courtney.

Along the way, the Red Bull Ampol Racing driver also had to contend with his radio channel being stuck open such that he could constantly hear engineer David Cauchi.

“But, coming seventh on a day that’s been horrible is pretty good.”

Van Gisbergen gave up at least eight positions in the pits due to the time lost when his crew had to fetch a spare air spike given the primary one had become snagged on the pit boom.

With Car #97 one of 23 that had started the race on wets, Triple Eight Race Engineering had made adjustments to their equipment in an attempt to optimise for the need to change all four tyres, to slicks.

“Something’s happened, they’ve tried to make it a bit better for the four-tyre stop and it hasn’t worked,” explained van Gisbergen.

“So, a real shame, because the car was speedy on slicks and we were coming through, fastest lap and stuff, and hopefully would have been top five, maybe better.

“It’s a shame, but something that happens.”

While he set the fastest lap of the race, that occurred on the penultimate, 4.95km tour, on slicks.

Van Gisbergen was puzzled as to why his car was relatively poor on wets, which he had spent much of the day on given the frequency of showers at Tailem Bend.

“We don’t know,” he said when asked what was amiss.

“There was a lot of talk at Sandown about tyres and we just haven’t had any grip all day.

“But, I had a good start, and then I just had no grip again and the front two [drivers] were gone.

“It’s weird because, in the wet at Sandown, it was awesome; today, not sure.”

While his pit stop was costly, van Gisbergen admitted that he “made mistakes too”.

Ironically, he extended his championship lead over team-mate Jamie Whincup by a point to 140, despite finishing a position behind Car #88, thanks to the bonus for setting the fastest lap.

It was in pursuit of those five extra points that the New Zealander made one of those mistakes, as he explained to Speedcafe.com.

“I was just going for fastest lap,” he stated.

“I was only ever going to finish seventh [after the pit stop mishap] so I just pushed like crazy and made a mistake.

“I dropped back to ninth, and then those two [who went past as a result, Davison and Courtney] went off in front of me, so that helped.”

While van Gisbergen crept ever so slightly further ahead of Whincup in the title race, Mostert is now just two points behind the latter having gone on to finish second to Heimgartner in Race 9.