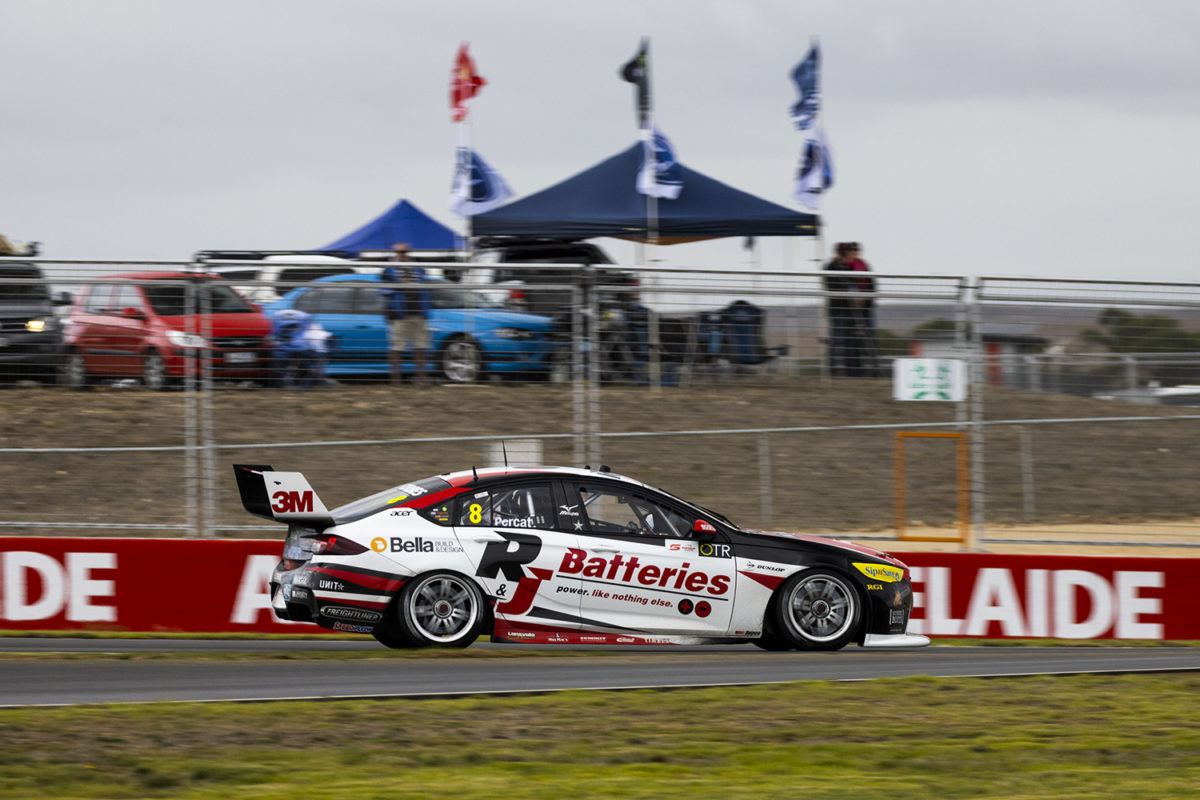 Nick Percat was in fact slightly disappointed to miss the podium by two positions despite starting Race 9 of the Repco Supercars Championship from last.

All four Brad Jones Racing entries filled up the bottom two rows of the grid for the opening race of the OTR SuperSprint weekend at The Bend Motorsport Park after a wet qualifying session.

However, as it so often does, BJR managed to make inroads by choosing an unusual strategy.

Three of its entries, including the #8 R&J Batteries ZB Commodore of Percat, took the start on slicks when every other car in the field was on wets.

Twenty drivers pitted within three laps of the pit window opening, in order to change from slicks to wets, but Percat stayed out all the way until Lap 20 of 24, five laps after team-mate Todd Hazelwood had peeled off from second spot under similar circumstances.

Car #8 rejoined in third position after his stop and, although Percat was unable to keep Anton De Pasquale at bay on cold tyres, managed to hassle the Dick Johnson Racing driver for much of that brief run home.

While clearly pleased to charge forward 21 positions, there was also some lament from the South Australian at the possibility that he pitted too late due to a radio issue.

“It was really good,” said Percat before adding, “I think it’s actually one that got away.

“The radio wasn’t great, I couldn’t actually understand what AE [engineer Andrew Edwards] was saying, so in the end I think we probably pitted maybe a little bit after… or didn’t probably optimise that part.

“But, other than that, the boys did a mega job.

“The car on slicks was obviously super-fast; it was great just to repay everyone at R&J Batteries and BJR. We came off dead ringer in 26th and ended up fifth.”

The four-time Supercars Championship race winner was still seemingly a chance of snatching the final podium position from De Pasquale until an error on the final lap saw him hand fourth position to Waters.

“Actually drove it off the road on the last lap – out of every lap – we lost a spot to Waters, but yeah, mega job, and we just need to qualify a bit further up,” remarked Percat.

Fifth is his best result of the season to date, and his sixth top 10, despite having qualified 10th twice and otherwise no higher than 13th.

The 32-year-old continues to hold ninth in the championship ahead of two more races at The Bend tomorrow.

The corresponding qualifying sessions will be held in the morning, from 09:10 local time/09:40 AEST.