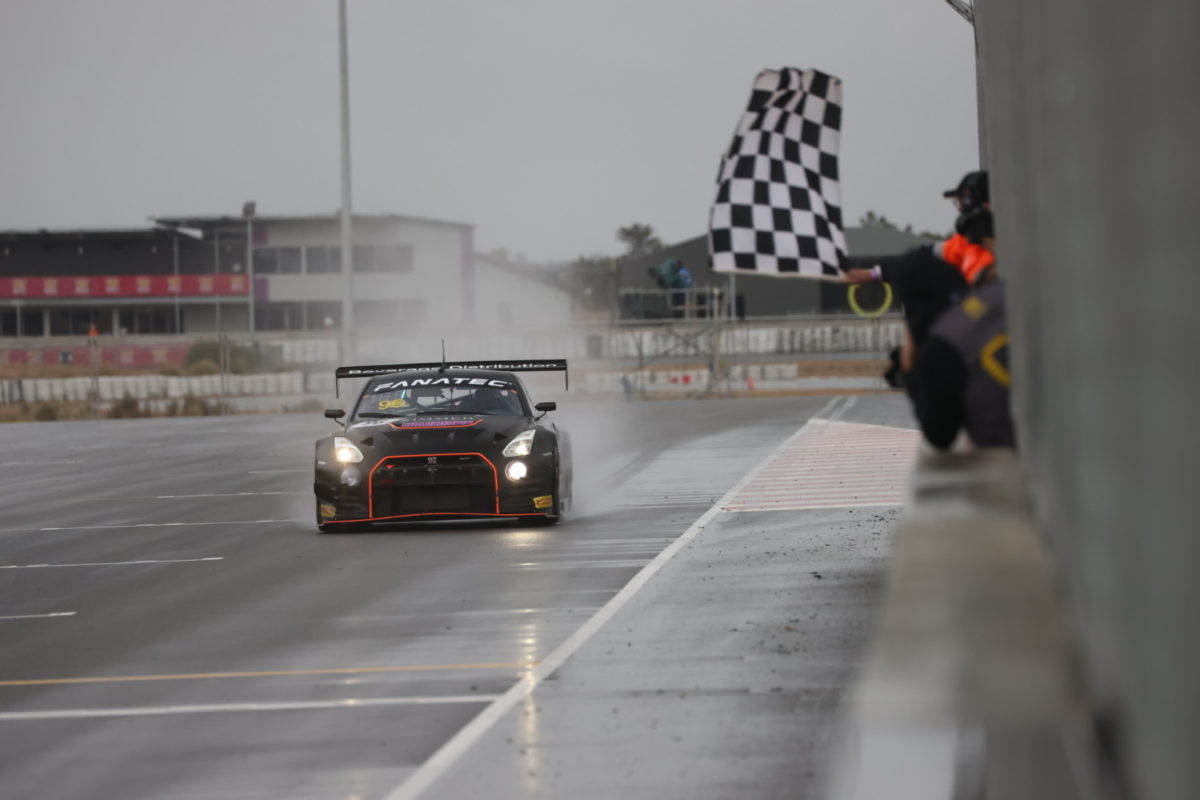 Brett Hobson has driven his Nissan to a massive victory in a heavily strategy-influenced Fanatec GT World Challenge Australia Powered by AWS opener at The Bend.

Having opted initially for slicks, the Trophy class competitor grabbed the lead at the start of Lap 2 and never looked back.

Dylan O’Keeffe brought Tony Bates’ #24 Bostik Audi home in third, another 16 seconds back, while Broc Feeney finished a lap down in sixth in the #888 Triple Eight Race Engineering Mercedes-AMG GT3 which Prince Jefri Ibrahim took the wheel of for the opening stint.

Changeable weather at Tailem Bend presented crews with a question about tyres before they left the paddock, and that was a major factor in how the first quarter of an hour would play out.

The Audis reportedly started on wets and while Shahin held the initial lead from pole position, he quickly came under pressure given the race line was mostly dry.

Hobson had only qualified sixth but rounded up Brad Schumacher (#55 Audi) to take third on Lap 1 at Turn 11, then quickly closed up to the #4 Grove Porsche.

There was a hit at Turn 17 but Hobson got down the inside of Stephen Grove, then breezed by Shahin at the start of Lap 2.

In clean air and on the preferable tyres, the Nissan disappeared to a 20-second advantage on Lap 4, by which time Ibrahim, also on slicks, had climbed to second after dropping to seventh in the opening corners.

Hobson was still well over 18 seconds ahead of the #888 Mercedes-AMG GT3 when a Safety Car was called on Lap 6 due to Am competitor Eric Constantinidis spinning off and sticking an Audi in the gravel trap at Turn 18.

Despite the compulsory pit stop window still being almost 10 minutes away, Triple Eight called Ibrahim into the pits, to take wets, and he resumed in 17th after a messy pit stop which displeased team boss Roland Dane greatly.

The restart came on Lap 9, in the last minute before the CPS window, and Kelly rounded up Shahin at the first corner, while Rosser quickly got underneath Quinn to take third spot.

Hobson Motorsport left it as late as they possibly could to perform their stop and it worked perfectly, given they did so as light rain to fall, allowing Car #96 to be sent on its way with wets and a margin over the field of around 44 seconds for the run home.

Second was Quinn, followed by Ben Porter in the #51 Lamborghini, O’Keeffe in the #24 Audi, Tander in the #777 Audi, Kelly, Taylor, Vince Muriti (#33 Mercedes-AMG), Basile Papadimitriou (#67 Audi), and Rosser, with Triple Eight’s Feeney in 14th.

Porter passed Quinn on Lap 16 at Turn 6, at which time Hobson was still over 41 seconds to the good, before Kelly served a drive-through for just missing the pit window.

Hobson continued his running battle with the Groves, making contact for a third time when he nudged the #4 Porsche as he lapped Brenton through Turn 16 on Lap 19.

Porter looked a threat of taking victory at one point but he was on slicks and that left him a sitting duck to O’Keeffe.

The TCR regular passed the Lamborghini on Lap 20 on the run to Turn 13, but the wets on the blue Audi were the worn set which it started the race with.

Tander, on the other hand, was armed with fresh treaded hoops and he passed O’Keeffe at Turn 1 on Lap 24, with five minutes to go.

O’Keeffe tried to fight back as soon as he could, at Turn 3, but crunched into the #777 Audi and spun himself out.

Nevertheless, he finished third, ahead of Taylor, Rosser, and Feeney.

Porter/Andrew Macpherson took seventh and Schumacher was eighth despite penalties for contact and coming up shy of his CPS time, while Quinn ended up ninth having opted for a late change from slicks to wets.

Matt Stoupas (#23 Audi) was just behind in 10th, Papadimitriou wound up 11th, and the Groves took 12th outright.