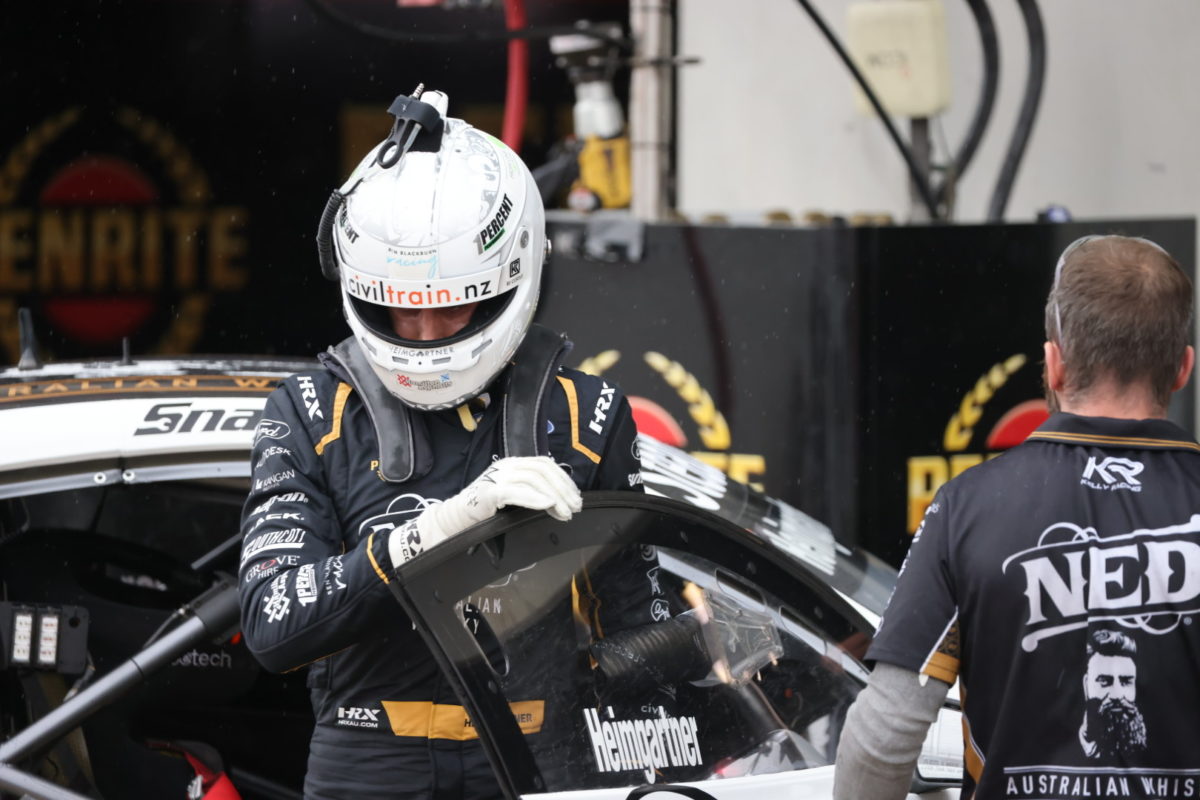 Andre Heimgartner has claimed pole position for Race 9 at the OTR SuperSprint after making the best of rainy conditions at The Bend Motorsport Park.

The Kelly Grove Racing driver wound up two tenths clear of the Repco Supercars Championship field at the end of qualifying and will be joined on the front row this afternoon by Walkinshaw Andretti United’s Chaz Mostert.

Will Brown was a career-best third, ahead of Anton De Pasquale, James Courtney, Will Davison, and Cameron Waters, while championship leader Shane van Gisbergen qualified eighth.

Heimgartner used the same set of wet tyres on the #7 Ned Mustang in all three, 10-minute parts of the knockout session, and that proved to be a wise strategy.

Having dominated the second segment with a 2:06.1724s which was more than half a second quicker than anyone else could manage, he banked a 2:07.8560s at the start of the final stanza.

That left him over four tenths up on the field until Mostert improved to a 2:08.0682s just before the chequered flag.

However, with the conditions seemingly getting worse as Part 3 wore on, Heimgartner could safely pit just before the end given no one was looking like knocking Car #7 off provisional pole.

“It was pretty surprising but the car was great,” said the now two-time Supercars Championship pole-sitter.

“It’s been great in practice. We went with the theory that if we kept the same tyres on, we would just be able to build on it and I’d be able to work on my driving rather than having to build the tyre temperature up each time.

“So really, really happy. It’s great for Ned, it’s great for Kelly Grove Racing. It’s our first pole position this year and things are heading in the right direction.”

Brown’s 2:08.4508s on his second flyer was good enough to put the #9 Ozland Group Solutions ZB Commodore third on the grid, while De Pasquale was the most prominent to improve after the chequered flag in setting a 2:08.6583s in the #11 Shell V-Power Mustang.

Heimgartner’s team-mate David Reynolds, however, missed out on progressing from Part 2 when Whincup jumped up the totem pole after the chequered flag.

Mark Winterbottom did not set a time in Part 2 of the session due to a power steering problem in the #18 Irwin Tools ZB Commodore and is therefore set to start Race 9 from 20th.

In Part 1, it was Mostert quickest on a 2:05.8464s and Pye who rescued himself with the chequered flag out.

The Team 18 driver could only get up to 20th, bumping Zane Goddard (#35 Yellow Cover ZB Commodore) into the bottom six, but it was enough in the end.

As a consequence, Row 11 on the grid is Goddard alongside Jack Le Brocq (#5 Truck Assist Mustang), while the four Brad Jones Racing entries fill the bottom four.