‘Surreal’ for new TCR star to hold off Mostert

‘Surreal’ for new TCR star to hold off Mostert 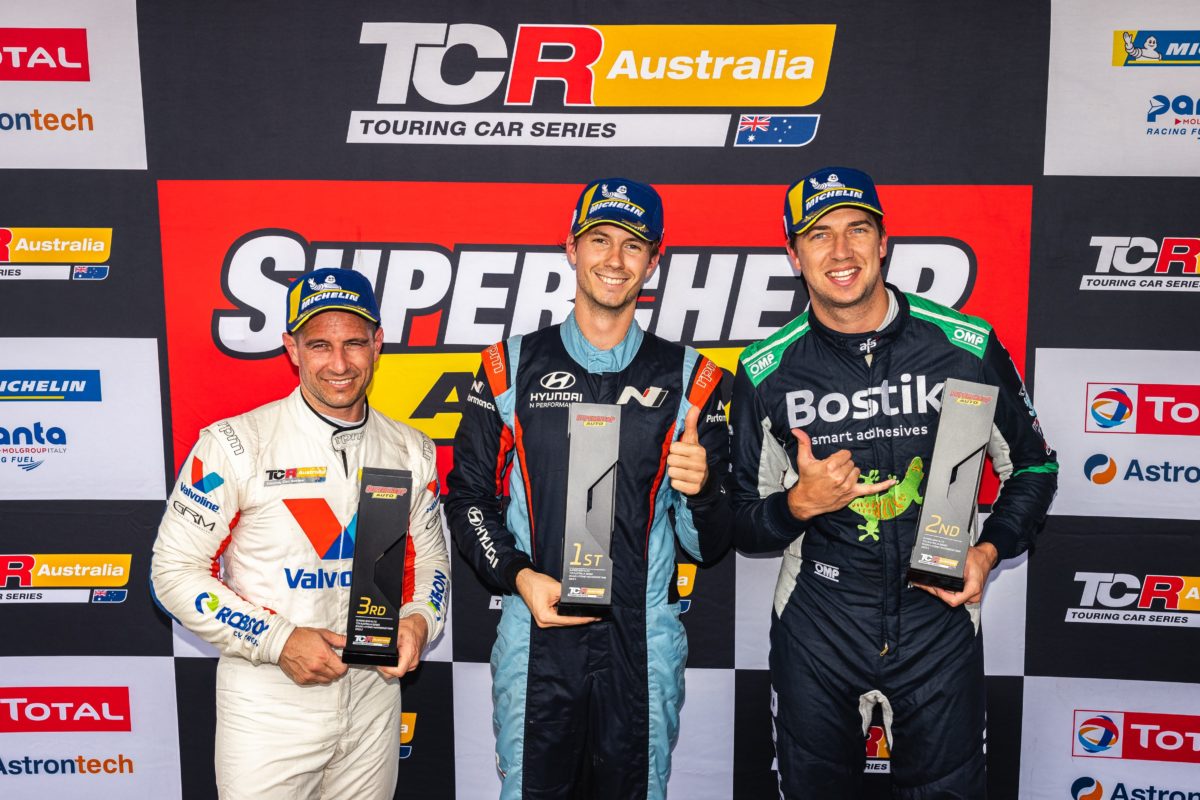 It was a “surreal” feeling for Josh Buchan to have to race against Chaz Mostert as he took his first two victories in the Supercheap Auto TCR Australia Series.

Buchan won Race 1 at Sydney Motorsport Park after putting a brave move on John Martin around the outside of Moffat Corner (Turn 1), before leading all the way in Race 2.

In the latter of those races, the rookie had crept away from Mostert during the opening laps, before the Supercars star and TCR series leader tried to fight back.

While well aware of who it was just behind him, Buchan tried to put that out of his mind, and went on to prevail by just over two seconds.

“I went into Race 2 as a winner in TCR, so there was an added pressure,” said the Hyundai driver.

“At the same time, there was also that relief in getting the first win and the monkey off my back. It was nice to get a good start and move out in front, which is where I like to be.

“I saw Chaz Mostert in my mirrors and tried to control the gap as best I could. He had a big push mid-race but I managed to hold on.

“I know what to do when I am out in front; concentrate on my apexes and being consistent with my pace. It’s a mind game that I play with myself.

“I tried not to think too much about it being Chaz Mostert in my mirrors. While I have the utmost respect for Chaz and his achievements, at that moment in time it’s just another name on the window.

“To have him racing me like he did was still pretty surreal, but you can’t let that cloud your concentration during the course of a race.

“I still remember and admire his victory in the Bathurst 1000. I’ve got a lot of respect for him and he was really good to me this weekend, with some words before the first race. Yeah, I’ve nothing but respect for Chaz.

“We’ve had a pretty good race car all weekend after he has had the benefit of the best car at previous rounds, so it was nice to give him a bit of a dose of his own medicine.”

Buchan finished Round 4 with a second placing in Race 3, an encounter which saw barely more than two laps of green flag action due to two crashes which drew Safety Cars. It was therefore the start, when Michael Caruso blazed to the lead from the second row on the grid, that was critical.

“Race 3 was really a bit of a non-event in terms of laps,” added Buchan.

“Caruso jumped up beside me off the start and made a great move happen up the inside. He put his car in a position that I really couldn’t defend and then off he went.

“Fair play to him, he did a really good job and stayed in front until the end.”

HMO Customer Racing team-mate Nathan Morcom also would have preferred less time trundling behind the Safety Car, given he saved his best hoops for the final race of the weekend.

The third placing in that contest was is his second podium of the season, and he had to wait before it become official given Dylan O’Keeffe would cop a post-race penalty for the manner in which he passed the #11 i30 N at the latter restart.

“The team was optimistic for a good result Race 3 as we had saved the best tyres for last and it paid off somewhat,” explained Morcom.

“I had a mega start off the line and moved behind Josh in third. It was a pity that the Safety Car then intervened as we were well prepared for the journey and a win wasn’t beyond the realms of possibility.

“At the restart, I had nothing in straight-line speed and O’Keeffe just drove past.

“It was rather fortunate for me that he made the move before the control line, which is a no-no in our racing. The penalty that he was issued guaranteed our place on the podium.

“Finishing the weekend with a podium was important for myself and the boys in the team. A good haul of points was also welcome as we try to nail that last little piece of the set-up puzzle and get everything possible out of the car.

“I’ll happily take that third place because we deserved to be there in that last race.

“The boys did a fantastic job all weekend and I am looking forward to the next round at Morgan Park.” Buchan jumped from 10th in the series to third by the time he left ‘Eastern Creek’, while Morcom improved from eighth to fourth.

Duvashen Padayachee, who has piloted a third HMO Hyundai in the last two rounds, is unlikely to enter the next but could return for Round 6 at Sandown in September.

Before the Melbourne event, Supercheap Auto TCR Australia is back with the Shannons Motorsport Australia Championships at Morgan Park on June 25-27.