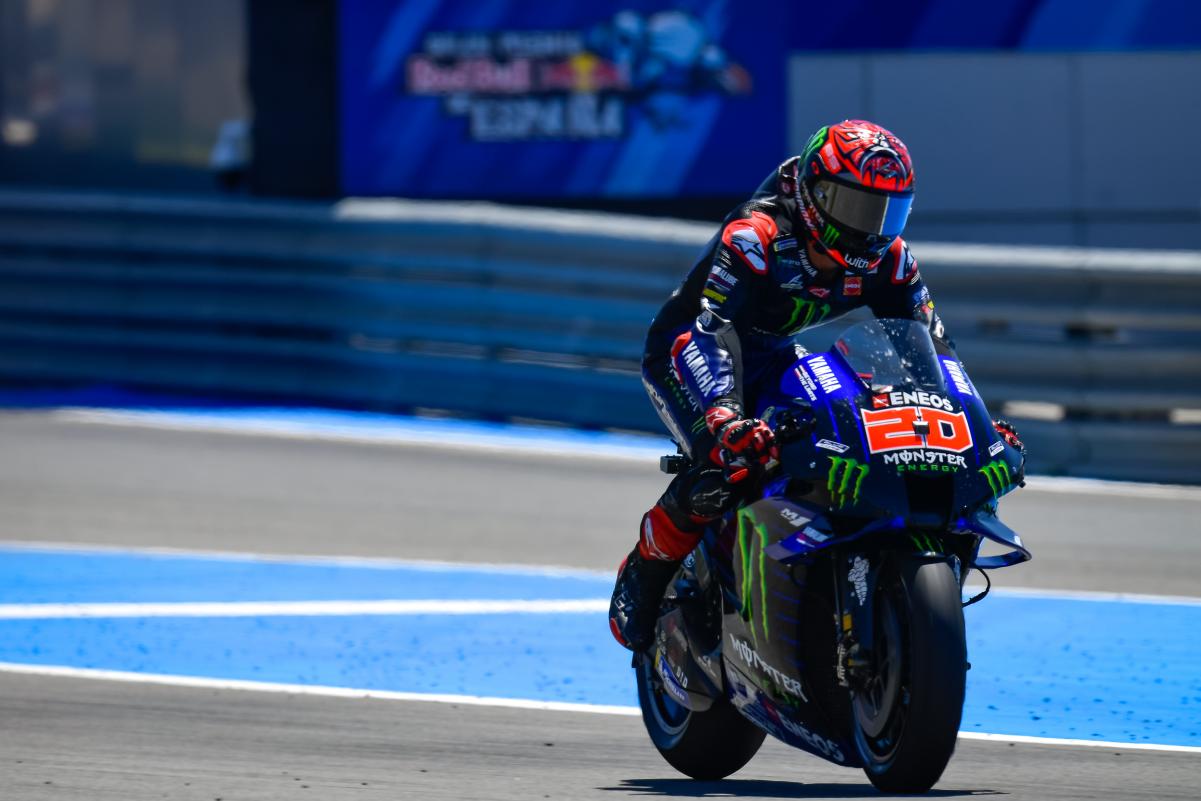 Fabio Quartararo has confirmed that arm pump caused his slide from a seemingly comfortable lead to a finish of 13th in a Spanish Grand Prix won by Jack Miller.

Quartararo overtook the #43 Ducati at the end of Lap 4 and gapped Miller to the tune of around 1.5s in the next nine laps.

With his Yamaha handling Jerez’s corners far better than the Desmosedici which followed, the Frenchman looked good for a third consecutive win.

However, he came to seriously want for pace from just after the halfway mark of the 25-lap grand prix, and gave up the lead on Lap 16.

While there was no obvious reason at that time as to why #20 was suddenly sinking down the order, Quartararo appeared to be in pain when he finished the race.

The Frenchman stated afterwards that it was indeed arm pump that he was suffering.

“I had a big issue with the arm, so sad because I was feeling really easy in the front,” he said.

“We had amazing pace this weekend and then I just had no more power on the arm. Just so disappointed about it.

“But I fought until the end, even if it was only for three points.”

Ironically, Miller had surgery for arm pump between the Doha and Portuguese Grands Prix, last month, while Quartararo underwent such a procedure during 2019.

The latter won both of the races which were held at Jerez last year, when the season finally began after the outbreak of COVID-19, but did subsequently suffer from the issue in the finale at Portimao.

Having had no dramas upon his return to the Portuguese venue this year, the 22-year-old seemed confused about his plight.

“Last year in Portimao was really bad, but this year it was perfect, and all the years I’ve been here in Jerez was good,” reported Quartararo.

“2020 here was perfect, zero problems. Not even a small pain and this year was the total opposite.

“I was in the lead by one second and then I had no more power. I still fought for six more laps with the pain, to keep the one-second lead, but it was just impossible for me. No more power.

“It was dangerous for me to ride the second half of the race but I didn’t want to stop because I knew that maybe one or two points can be really important for the championship, so I gave it my all.

“I had to brake with four fingers and normally I brake with one. I couldn’t go full gas on the straight.

“But, no explanation [for the arm pump]. I’m training the same, I’m feeling even better on the bike and… I don’t know.”

Another round of surgery appears likely now, although Quartararo admitted he was “lost” about the breadth of advice he received after the race.

“My brain right now is not working, [but] I have people – my manager, my best friend – to try to look at the best option, but right now I have no idea,” said the pre-round championship leader.

“For sure, something is planned because my arm is not okay. Portimao last year was a disaster, this year was perfect. Here I’ve never had a problem in my life, this year I have a problem. So it’s something that I don’t understand.

“We are still looking but there are too many options, my brain is just full of people telling me to go in one place, to go in another, or another. Actually, right now I’m lost, but we will see.”

The MotoGP field will test at Jerez this evening (AEST), although Quartararo is unsure if he will be on track.

The result in the grand prix, which caused him to drop to second in the title race, two points behind Miller’s team-mate Francesco Bagnaia, was a shock considering how the first half of the race had gone.

“I’ve been super fast, I’ve stayed calm, I knew I was fastest today,” he noted.

“You start the race and you don’t even feel that stress, I was full of confidence and as soon as I was fourth I said, ‘From now I will overtake them in the last corner’.

“Every lap I was overtaking, I pulled away and everything from this weekend was positive until halfway through the race and that problem on the arm. But I felt super good on the bike.”

After tonight’s test, the field moves to Le Mans for the French Grand Prix, Round 5 of the campaign, on May 14-16.