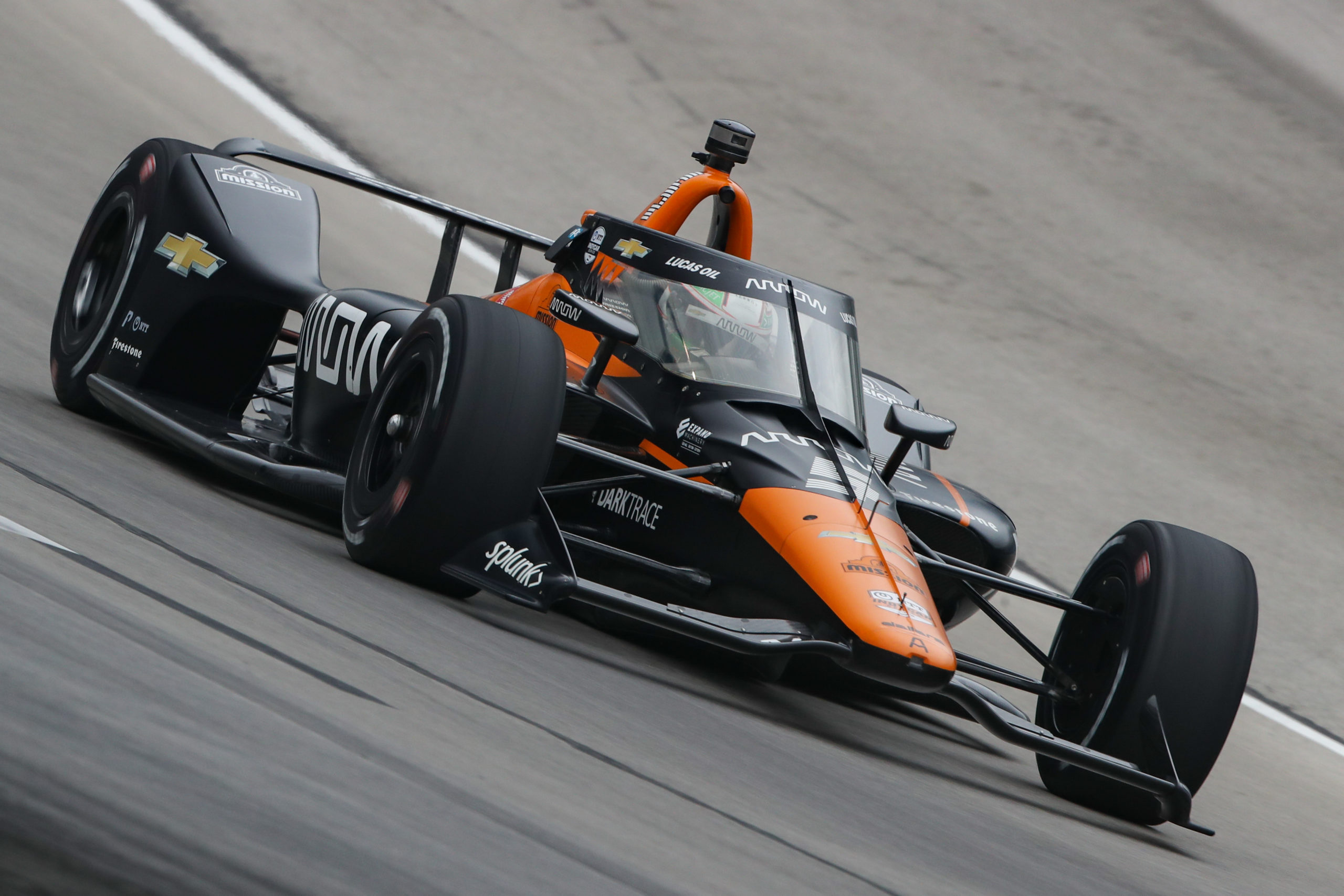 The Arrow McLaren SP driver hung around the top five for the lion’s share of the 248-lap Xpel 375, making a late surge to steal the lead.

The 21-year-old passed Team Penske’s Josef Newgarden with 24 laps to go, going on to win by a little over one second.

“Finally man! That was a long race, but man we had so much pace in the Arrow McLaren SP #5,” said an elated O’Ward, who has previously finished second on three occasions.

“This team has been doing such a good job and we bounced back from last weekend.

“We got a podium yesterday, we had pace, and we got the job done today. I couldn’t be happier for our group of guys.”

After a dramatic start that took seven cars out of contention, Scott Dixon (Chip Ganassi Racing) led the field to green on Lap 20 followed by team-mate Alex Palou. 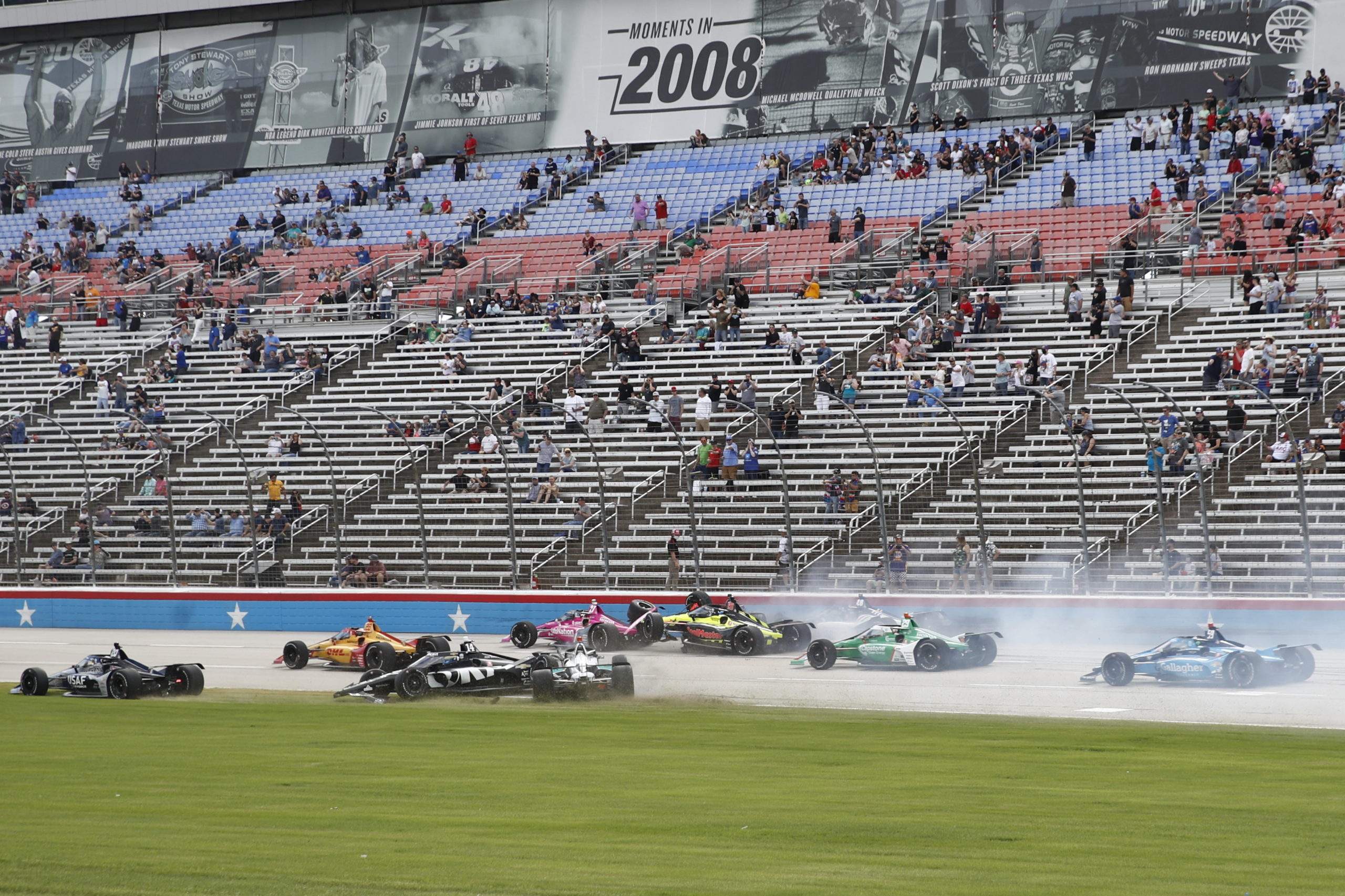 There was carnage before the Xpel 375 got underway

Meyer Shank Racing driver Jack Harvey was quick away, surging from fifth to third. That saw Will Power (Team Penske) drop to fourth and O’Ward fifth.

Much like the race a day earlier, the opening stanza saw little in the way of passing.

Come Lap 57, O’Ward got a run on Power and took to the low side into Turn 3. Power squeezed the Mexican, who got loose and backed out midway through the corner.

Pit stops began on Lap 66 with Colton Herta (Andretti Autosport with Curb-Agajanian) the first of those to stop.

The second Yellow flew on Lap 115 when front-runner Harvey suffered a wheel bearing issue, smoking his way back to the pit lane.

The field duly came to the pit lane, Dixon maintaining his lead. Power was a benefactor in the pit stop sequence, surging to second while Rahal went to third.

Newgarden and O’Ward were fourth and fifth respectively while Palou suffered a slow stop and fell to fifth. Rosenqvist, Pagenaud, McLaughlin, and Herta rounded out the top 10

Racing resumed on Lap 128 with just 16 cars left in the race.

O’Ward was quick away on the restart, passing Newgarden and Rahal to make his way from fifth to third. Further back, McLaughlin lost a couple of places and dropped outside the top 10.

At the front, O’Ward continued to hustle, passing Power around the outside on Lap 131.

Rahal was similarly quick, making a move on Power on Lap 134. Two laps later he caught O’Ward and moved into second.

What followed was a duel for the lead that saw Dixon and Rahal trade places at the front of the field a handful of times as the pair sought to save fuel.

Dixon would come to the pit lane on Lap 184 with the lead followed by Rahal, though neither would lead once the pit stop sequence was complete. Newgarden, who pitted one lap before the Yellow, found his way to second place behind Takuma Sato (Rahal Letterman Lanigan Racing) who hadn’t pitted.

Sato led Newgarden to the Green with O’Ward, Rahal, and Dixon completing the top five.

Further afield, Power got caught up high going into Turn 3. With no grip, the Toowoomba pilot understeered and drifted up into the outside wall, falling to 14th on Lap 200.

Come Lap 202, Newgarden went to the outside of Sato and duly took the lead. Shortly thereafter, Sato pitted.

O’Ward soon closed in on Newgarden for the lead and with 24 laps to go slipped to the two-time series winner’s inside at Turn 3 to take first.

From there, his lead was unchallenged. O’Ward cruised across the line, winning by 1.2s with Rahal third, Dixon fourth, and Herta fifth.

The series now moves to Indiana for the GMR Grand Prix on the road course configured Indianapolis Motor Speedway on May 15.

The series is still led by Dixon on 153 points with O’Ward in tow, 22 points adrift.

McLaughlin’s eighth place finish sees the Indycar Series rookie drop one place to eighth equal in the standings with Will Power, 54 points in arrears of Dixon.