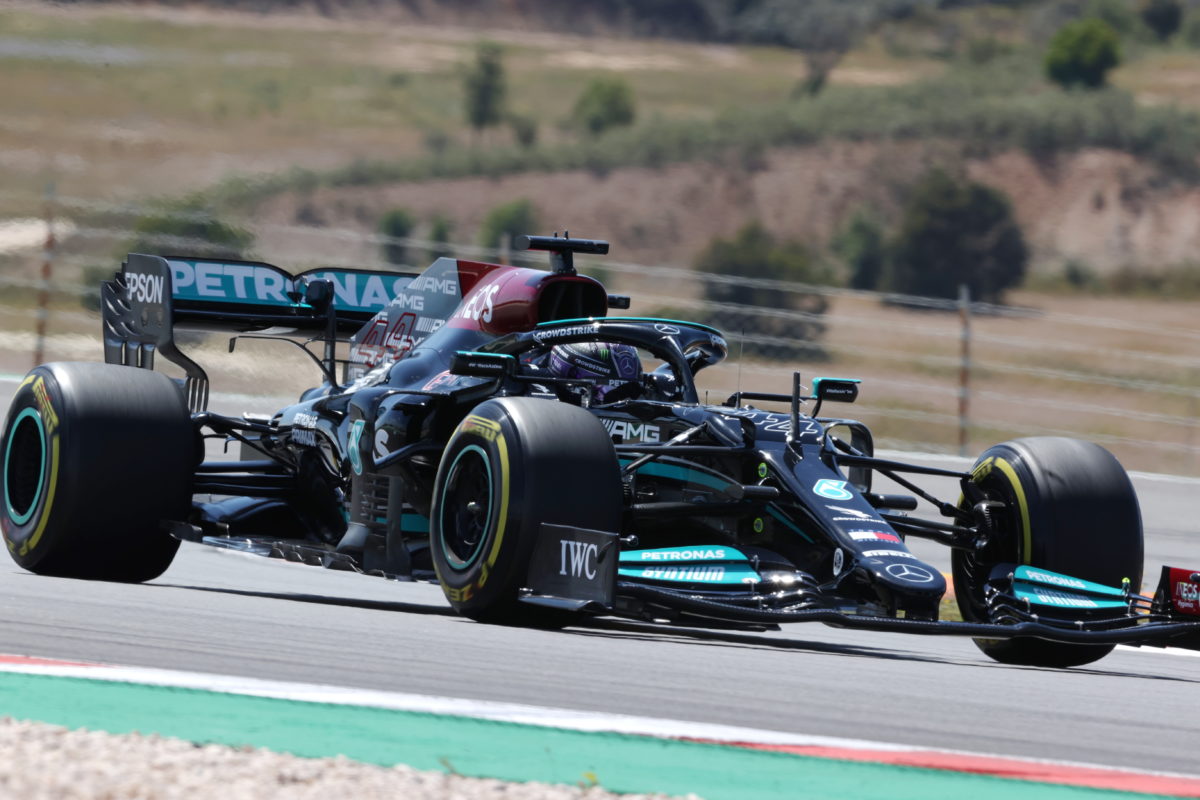 Lewis Hamilton has eased to victory in the Formula 1 Portuguese Grand Prix to extend his world championship advantage.

The Englishman lost out to Max Verstappen at an early Safety Car restart to fall to third before racing his way forward to take victory.

Verstappen was second at the flag with pole-sitter Bottas third after the pair stopped late in pursuit of the fastest lap.

Bottas headed the field into the opening corner from Hamilton and Verstappen.

Sergio Perez dropped a spot off the line to Charles Leclerc, the Mexican then having to fend off from Lando Norris in the first part of the opening lap.

The McLaren fell prey to Esteban Ocon midway around the lap, steaming back around the outside of Turn 11 to regain the place half a lap later.

That became 13th when Kimi Raikkonen lost his front wing as he headed down the front straight to start Lap 2, drawing the Safety Car.

It was the result of contact with the right-rear wheel of Antonio Giovinazzi, scattering debris across the track.

The race restarted at the start of the sixth lap, Bottas backing the field up until he was on the front straight.

It made Hamilton vulnerable to Verstappen, the Red Bull driver rounding the Mercedes to claim second at the first corner.

Perez claimed fourth, but was relegated to fifth again as Norris stole the spot at Turn 5.

A strong restart for Ricciardo saw the Australian move up to 11th as George Russell slipped three places on the opening lap after the restart.

The front three quickly skipped clear of the rest of the pack, Norris falling 2.7s away from Hamilton at the end of Lap 7.

Perez was a further 1.2s back, with Carlos Sainz 1.9s away in sixth place.

Hamilton regained second as they started Lap 10, the Mercedes driver making the move into Turn 1.

A mistake from Verstappen exiting Turn 14 had allowed Hamilton a run down the front straight, the seven-time world champion not wasting the opportunity.

Once ahead, Hamilton quickly moved out of DRS range as the third placed Red Bull began to slip away from the front two.

Perez regained fourth place from Norris on Lap 15, the McLaren driver offering no defence at Turn 1.

Ricciardo moved into the top 10 on Lap 18, using DRS to pass Vettel at the first corner.

Hamilton rounded Bottas for the lead as they began Lap 21, using DRS to draw alongside before going side-by-side through the first corner.

On the inside, Bottas had to slow more than his team-mate and lost out to Hamilton as a result.

Sainz was the first into the pits, the Ferrari driver having started the race on a set of soft tyres, falling from sixth to 15th as a result.

Norris was in on the next lap. He too had started on the soft compound tyres, with Ocon, Sebastian Vettel, and Giovinazzi all taking to the lane.

Sainz moved onto the medium compound tyres, while Ocon and Giovinazzi had opted for the hards at their stops.

Norris resumed the race narrowly ahead of Sainz, but the McLaren driver was able to hold on to the position as they brought his tyres up to temperature.

Leclerc pitted from fifth place after 26 laps, swapping from a set of medium tyres to the hards, the leading runner on the white-walled compound.

After Vettel pitted, Ricciardo’s pace increased as he found himself fifth on the road, though yet to stop.

He was lapping consistently in the low 1:23s bracket, while Vettel’s pace was in the high 1:23s, suggesting the Australian would leapfrog the Aston Martin once he stopped.

After 36 laps, Verstappen peeled into the pits, fitting a hard set of tyres to the Red Bull. He emerged in fourth place, having lost out only to Perez.

Mercedes responded with Bottas, turning in a 3.3s stop to narrowly hold on to second place.

Like Verstappen, he had a set of hard compound tyres fitted, the Dutchman promptly attacking into Turn 5 to take the place.

The race leader took to the lane after 37 laps to give the lead to Perez as Hamilton rejoined in a comfortable second place.

Alonso stopped after 40 laps, the Spaniard having been running sixth as he did so. He had a set of hard compound tyres fitted and rejoined 11th behind team-mate Ocon.

It left Perez and Ricciardo as the only two drivers still to stop until the McLaren driver was hauled in a lap later.

A slow stop saw him slip to ninth behind Pierre Gasly – an overshoot on his marks likely costing Ricciardo the position as his pit crew took time to readjust.

Perez had a moment when trying to put a lap on Nikita Mazepin, the Haas driver taking the apex at Turn 3 and nearly colliding with the race leader in the process.

It cost the Red Bull driver two seconds as the Russian, who was running last at the time, was slapped with a five-second penalty for ignoring blue flags.

Ricciardo moved up to ninth after he pulled a move on Gasly, taking the place with a tidy over-under move on the exit of Turn 5 on Lap 49.

Alonso also passed Gasly half a lap later before closing in on Ricciardo.

Hamilton regained the race lead at the start of Lap 51, using DRS to ease by Perez down the front straight.

It was a similar move to that which Alonso put on Ricciardo soon after, the McLaren driver working to defend more vigorously than Perez had.

A 2.6s stop for the Mexican on Lap 52 saw him rejoin fourth with a new set of soft compound tyres bolted on.

“I’m losing power,” came the call from Bottas back to his team, the Mercedes driver beginning to haemorrhage time.

It was a temporary issue and the Finn quickly refound his race pace but fell 4.9s away from Verstappen while he struggled with the power unit sensor problem.

Perez claimed fastest lap with a 1:20.643s on Lap 56, only 0.3s faster than Hamilton had managed, despite having a set of soft compound tyres fitted.

Bottas stopped on Lap 63 for a set of soft compound tyres, Mercedes looking to steal away the point for fastest laps.

It was a free stop, the Finn entering the lane in third and resuming the race in the same spot with a margin of just over 3s to Perez in fourth.

Next time by, Verstappen stopped in pursuit of the faster lap point, the Dutchman stationary for only 1.9s.

It left Hamilton with a comfortable lead, which saw him claim victory with ease over Verstappen, with Bottas third.

Perez chalked up his best result for Red Bull in fourth ahead of Norris, Leclerc, Ocon, Alonso, Ricciardo, and Gasly.

The point for fastest lap seemed to go to Verstappen, a 1:19.849s effort just 0.016s faster than Bottas had managed on the penultimate lap.

That was before the Red Bull driver’s lap was deleted for track limits at Turn 14, handing the point to Bottas and Mercedes.

Verstappen has therefore slipped to eight points adrift of Hamilton in the drivers’ championship, while Mercedes now holds a 18-point advantage.

McLaren remains third, now 11 points clear of Ferrari but 30 down on Red Bull while Norris remains third ahead of Bottas in the drivers’ championship.

It’s a quick turnaround with Formula 1 back in action for the Spanish Grand Prix next weekend.