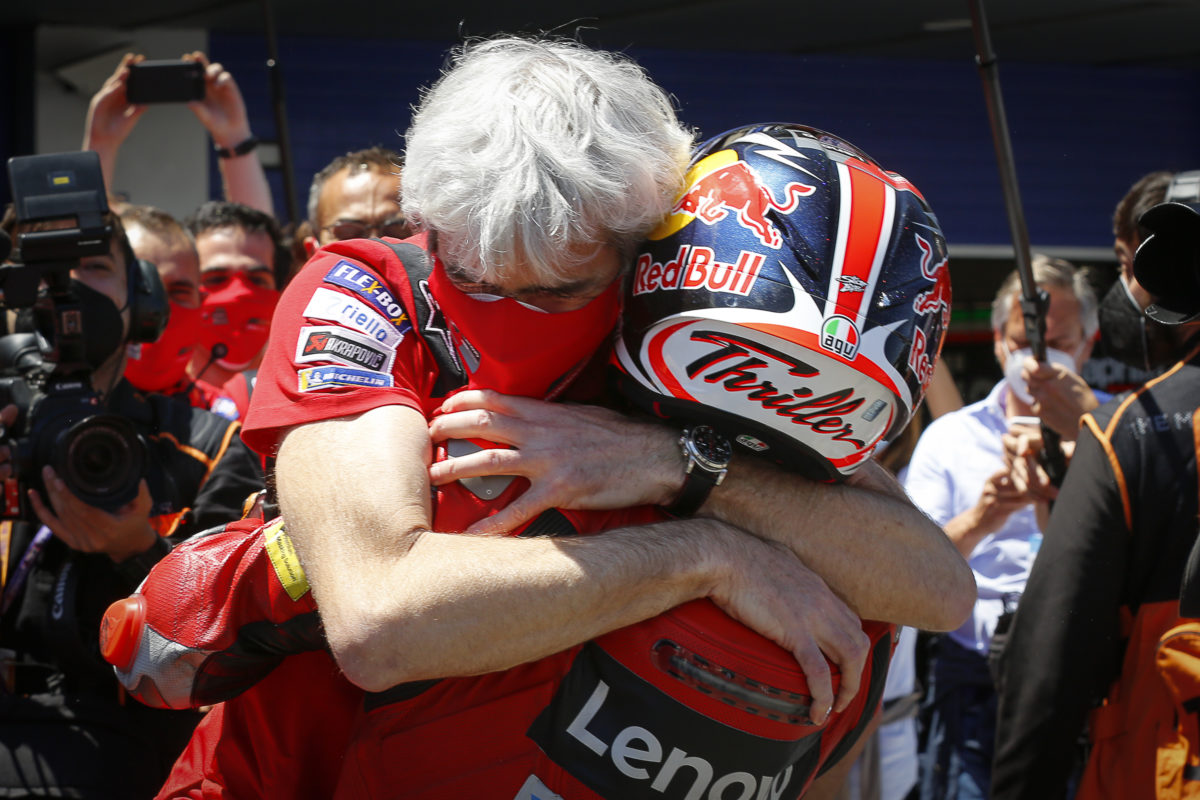 Gigi Dall’Igna suggested he was the happiest man in the world after Jack Miller led Francesco Bagnaia to a Ducati Team one-two in the Spanish Grand Prix.

Miller already looked on for what would have been a commendable second placing at a Jerez circuit which does not suit the Desmosedicis before long-time race leader Fabio Quartararo faded dramatically due to arm pump.

By the time the Queenslander got by the factory Yamaha, Bagnaia had already disposed of SRT Yamaha rider Franco Morbidelli, and they duly delivered a perfect result for Ducati’s works team.

“I’m really, really happy; I’m probably the man that is more happy in all the world at the moment,” said Dall’Igna, Ducati Corse’s general manager.

“Winning here, this is normally a difficult race track for us, and so first and second, it’s something unbelievable. This is a really good test for our bike.

“I’m really happy also for our riders because they did an incredible job during the race.

“Pecco [Bagnaia] was fantastic because he had to do a really difficult race because he was fourth at the beginning; not easy to manage the race.

“Also Jack, unbelievable, because he fought a lot to stay at one second from Quartararo, and at the end this is the best that he can do.”

Miller and Bagnaia represent an all-new pairing at the Ducati Lenovo Team after the exits of Andrea Dovizioso, who got 14 wins with the squad, and Danilo Petrucci.

Sporting director Paolo Ciabatti had already declared during pre-season that there are “no shortcomings” in the 2021 line-up compared to the predecessors.

Asked post-race if he was pleased to sign Miller and Bagnaia, Dall’Igna said, “Yeah, I’m really happy with the atmosphere that we have inside the box.

“Both riders are fantastic and it’s a really pleasure to work with them, and the connection between the two teams are really perfect, so I’m really, really happy.”

Bagnaia took over the championship lead, with a two-point margin over Quartararo, while Miller is now sixth at a further 25 points behind.

There is an official test tonight at Jerez before the French Grand Prix at Le Mans on May 14-16.