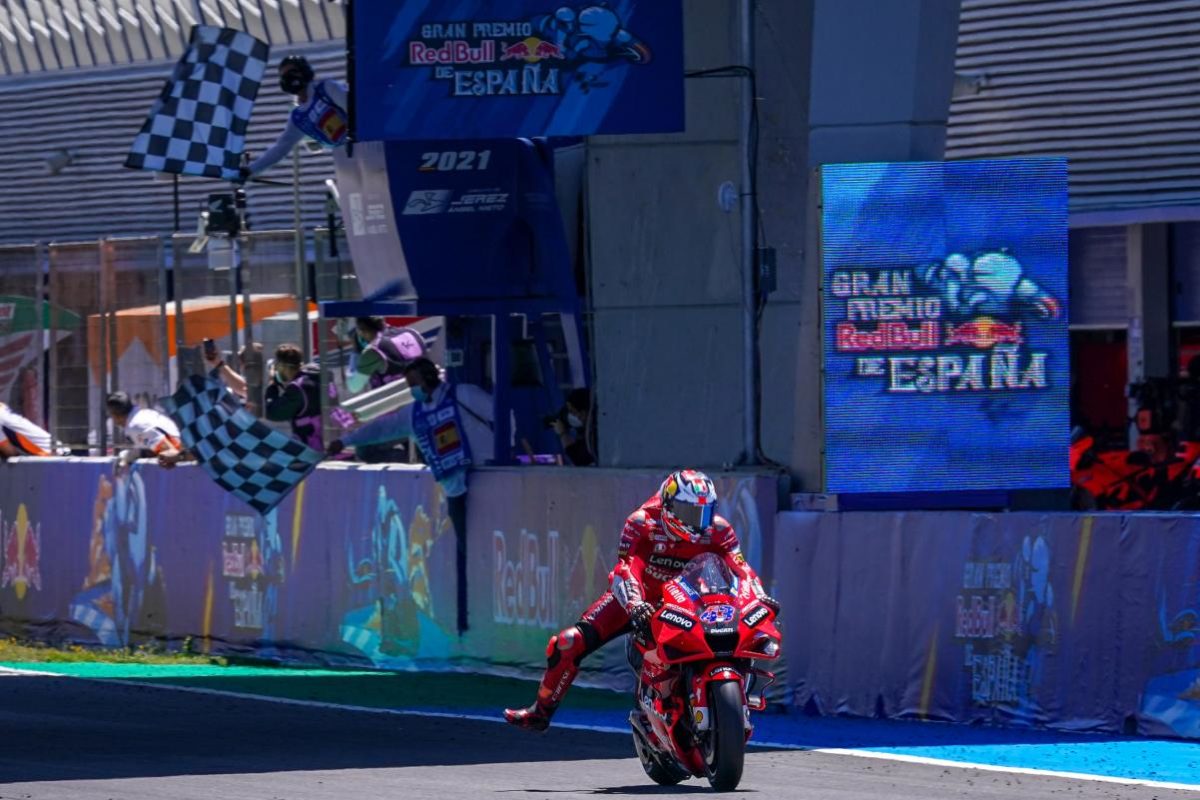 Jack Miller has taken his first ever dry weather MotoGP race win, in the Spanish Grand Prix at Jerez.

The victory, also his first for the factory Ducati Lenovo Team, came after Fabio Quartararo faded dramatically to 13th at the chequered flag when he had seemed almost certain to win.

Even better for Ducati, it was Miller’s team-mate Francesco Bagnaia who finished second and moved into the championship lead, with Petronas SRT Yamaha’s Franco Morbidelli rounding out the podium.

Back at the start, Miller jumped into the early lead from third on the grid, ahead of Morbidelli, Bagnaia, Quartararo, and Aleix Espargaro (Aprilia Gresini).

Quartararo had pace on Bagnaia but needed two attempts to make a pass stick, the latter being a dive down the inside at Curva Lorenzo (Turn 13) on Lap 2.

The Frenchman pulled off the same move on Morbidelli a lap later, as Aleix Espargaro went underneath Bagnaia just behind them.

Quartararo wasted little time in latching on to the rear of the #43 Ducati, and made it three last-corner overtakes in as many laps.

By the end of Lap 5, he was 0.5s up on Miller, while the top five collectively was a clear breakaway relative to the rest of the field.

It was a full second on Lap 8, before Bagnaia reclaimed fourth spot from Aleix Espargaro on Lap 9 as they ran towards Dry Sack (Turn 6).

Quartararo was 1.5s to the good after 13 laps, but it was soon after that the tide started to turn.

As Bagnaia passed Morbidelli at the start of Lap 15, Miller had wiped out #20’s once seemingly rock solid lead, before picking off the Yamaha at Turn 1 on Lap 16.

The Queenslander gapped Quartararo to the tune of 0.6s by the end of that tour, then Bagnaia went down the inside of the pre-race championship leader on Lap 18 at Turn 4.

By that time, Miller was more than two seconds up the road and although Bagnaia was chipping away at that advantage at one point, there would be no serious threat to the man who won a wet Dutch TT in 2016.

They were separated by 1.912s when the chequered flag flew after 25 laps, with Morbidelli third after also passing Quartararo on Lap 18.

As such, Miller moves up to sixth in the championship, 27 points behind Bagnaia and 25 behind Quartararo.

Fourth on the day went to Nakagami thanks to a very brave move around the outside of Aleix Espargaro at Curva Sito Pons (Turn 5) on Lap 19, although that was only for fifth at the time and was enabled in part by the #41 Aprilia being bottled up behind Quartararo.

Mir passed Aleix Espargaro on Lap 19 at Dry Sack before doing the inevitable to Quartararo, and therefore took fifth.

Marc Marquez finished ninth, one spot up on team-mate Pol Espargaro, having run around the cusp of the top 10 all afternoon.

Alex Rins (Suzuki Ecstar) managed to finish, but got no points for that given he did so in 20th, after crashing out of seventh position on Lap 3.