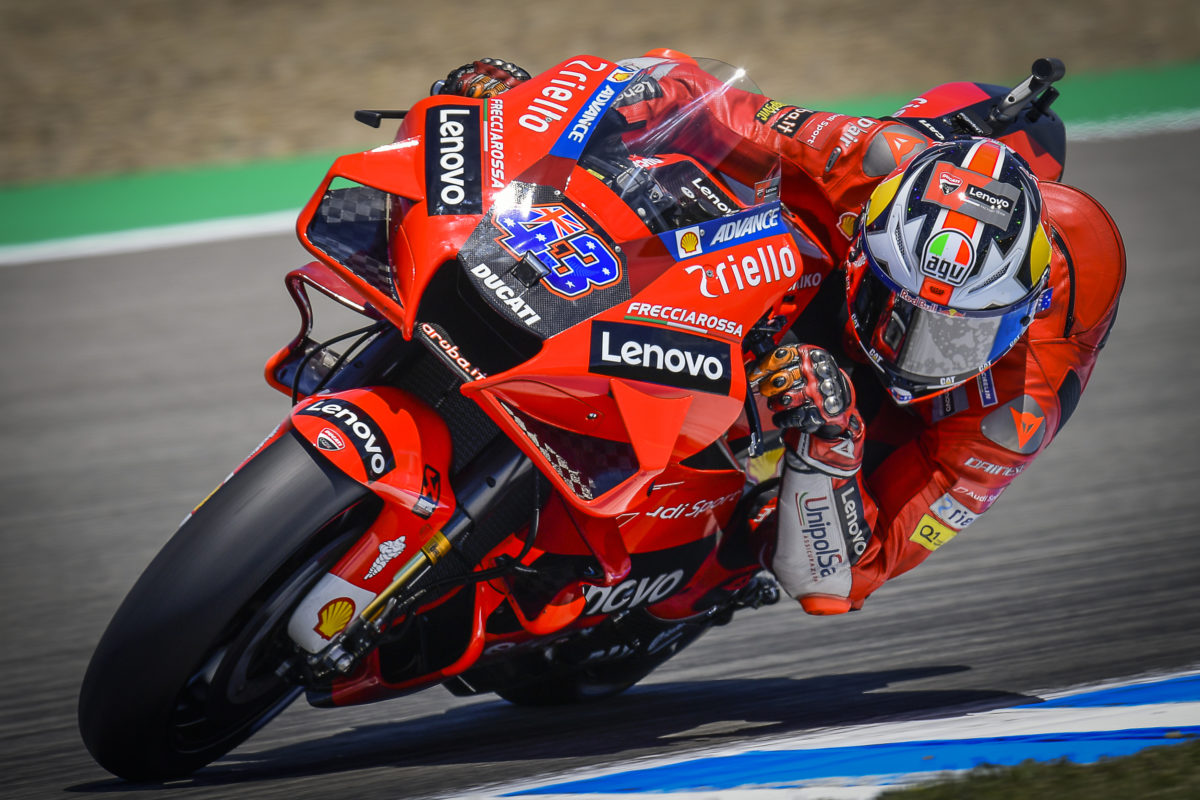 Jack Miller says it “means a lot” to be back on the front row in MotoGP, even if he was focused more on race pace in practice at Jerez.

Miller will start tonight’s Spanish Grand Prix just 12th in the championship after two finishes of ninth and a crash in the opening three races of the season.

Furthermore, in qualifying third at Round 4, the Ducati Lenovo Team rider has made the front row for the first time since the 2020 finale.

Miller was barely more than a tenth of a second away from the pole lap from championship leader Fabio Quartararo (Monster Energy Yamaha), but has in fact been trying to extract more race pace from his Desmosedici.

“We did two runs which I think was like 10 laps each in FP1, and the same in FP2, just trying to do longer runs and work on the race pace,” he explained.

“Generally when it comes down to it and throwing down a lap, I’m not too bad. The pace has been good too.

“Thankfully we did a run in FP3 with 13 laps on the tyres and then I was able to do another 10-lap run which ended up being around 23 laps on them [race tyres], and it felt good, the pace was good.

“We planned to stay out the whole FP4 session but I went out and we had an issue on the bike that took a little bit longer than we wanted to get sorted, but we got it sorted and we had to get both bikes ready for quali.

“The quali went well; I was able to do a few consistent laps.

“I’m excited. It means a lot to be back on the front row, especially here in Jerez which is quite an important one as it can get pretty chaotic in the first few laps.”

Miller’s personal best in qualifying, a 1:36.860s, came as he tailed team-mate Francesco Bagnaia around the circuit.

It was not the only time he was helped by the Italian, whose data in Sector 4 proved valuable to the 2016 Dutch TT winner.

“Yeah I was able to find a solution pretty simple this morning after looking into the data last night,” said the Queenslander.

“I don’t really know what I did too much,” he laughed, “but it felt good and I was able to have confidence in my bike to carry the corner speed.”

Bagnaia ended up fourth on the grid, behind Quartararo, Franco Morbidelli (Petronas Yamaha SRT), and Miller, for the 25-lap race which is set for a start at 22:00 AEST.